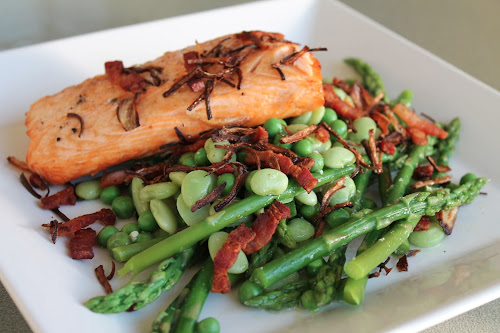 I love asparagus with salmon. I love peas with salmon. I love bacon with salmon (and just about everything else). This dish, adapted from a recent Bon Appétit recipe unites that trio, along with lima beans and shallots, for an easy midweek broiled salmon. Salmon doesn't appear in the magazine's recipe, but I think it's an obvious accompaniment for this spring mix. Unfortunately, I could not find the fava beans it called for, but lima beans are a fine stand in (edamame would also be good).

The crispy shallots are a nice touch but watch them carefully. Although the original recipe called for frying them for 10 to 12 minutes, mine were definitely ready after just 5 minutes and you don't want to overcook them.

1. Preheat broiler with oven rack about 5 inches from broiler (the top position in my oven). Place salmon fillet skin-side down on an oiled baking sheet. Spray or brush with olive oil, season with salt and pepper. Broil until cooked through, about 10 minutes, turning halfway through.

2. Cook bacon in a medium frying pan over medium heat until browned and crisp. Remove with slotted spoon and transfer to paper towel lined plate.

5. Heat vegetable oil in a small saucepan over medium heat. Add shallots and cook, stirring occasionally, until golden brown and crisp, about 4-6 minutes (original recipe said 10 to 12 minutes, but mine were definitely ready much sooner). Transfer shallots to a paper towel-lined plate.

6. Add vegetables to a large bowl and toss with the dressing. Divide among two plates and top each with half the salmon, bacon and fried shallots.

7. Add dressing to bowl with vegetables, season with salt and pepper, and toss to coat. Transfer salad to a serving platter and top with shallot and bacon.
Posted by Cook In / Dine Out at 12:00 AM