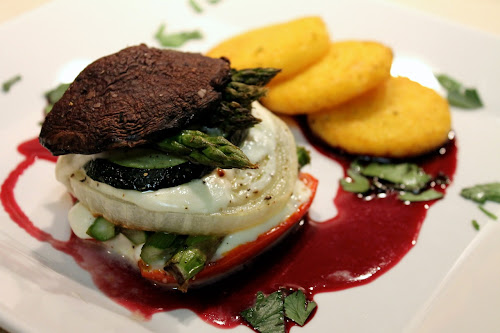 I'm anxious for the bounty of spring vegetables to arrive. Apart from the asparagus though, we're just not quite there, a situation The New York Times bemoaned last week. Their solution was to treat winter vegetables with spring-like preparation or to "cheat," that is take advantage of spring vegetables that are already available because they are grown in other places, like California. 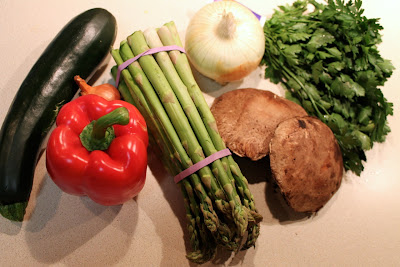 I don't know if I consider it cheating, but I did have a craving for a mix of vegetables recently that I decided to satisfy by making roasted vegetable napoleons. Traditionally, a Napoleon is a layered pastry, but a recent Washington Post article about a meal at Mintwood Place described a vegetable version. Mine isn't nearly as complex as Chef Cedric Maupillar's, but it's still a fun way to serve roasted vegetables in a different way. 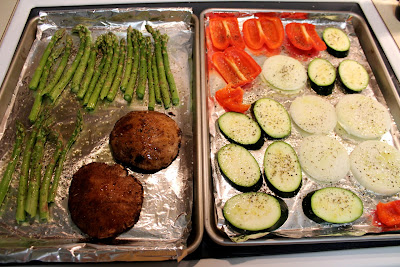 Because the asparagus and mushrooms require less time in the oven, I arranged them in one pan so I could remove it from the oven while the heartier vegetables--the peppers, onion and zucchini--continue in the oven until they develop a little color. Since the whole thing goes back in the oven for a final blast to warm through and melt the cheese, be careful not to overdo it, especially with the mushrooms, which could burn if left in the oven too long. 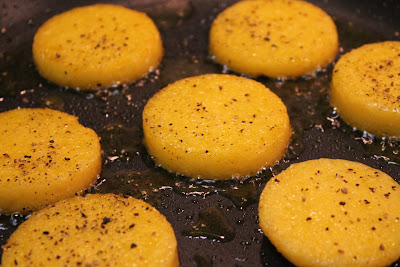 I served the napoleons with fried polenta and went the easy route: I bought the pre-cooked polenta that comes in the tube, sliced it into 1/2-inch slices and fried them in olive oil with a little salt and pepper.

3. While roasting vegetables, make the red wine sauce: combine wine, shallot and rosemary in a small saucepan. Bring to boil and cook until reduced to about 1/3 to 1/2 a cup. Remove from heat to cool. Discard rosemary and shallot.

3. Assemble the Napoleons (you'll be making four): Line a baking with with parchment. Lay down the bell pepper slices, skin side down. Top each with a slice of mozzarella, then 4 or 5 asparagus spears (the fatter ones), an onion slice, more cheese, a zucchini slice, more cheese, more asparagus spears (the tips), more cheese and finally the portobello mushrooms (you'll have some leftover vegetables, wi. Return to oven to heat through and melt cheese, about 4-5 minutes. Remove from oven and allow to cool. Serve with red wine sauce and a sprinkle of parsley.