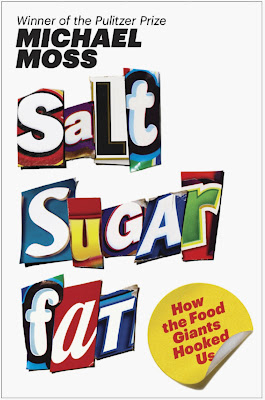 A few weeks ago I did something I hardly ever do. I ate a Cheeto. And not just one, of course, but the whole bag, since how do you stop with just one? Or even 21, which is a single serving as defined by Frito-Lay, delivering 150 calories from 10 grams of fat, 13 grams of carbohydrates and 2 grams of protein, plus about 10 percent of the recommended daily allowance of sodium and just a trace of fiber. Its ingredients include whey protein concentrate, monosodium glutamate and “cheese seasoning.” A Cheeto may be orange, but it’s no carrot.

Why did I do this? I’d just read “The Extraordinary Science of Addictive Junk Food,” a New York Times Magazine article by Michael Moss that preceded the recent release of his book, Salt Sugar Fat: How the Food Giants Hooked Us. In the article, he talked with a former Nestlé food scientist about what makes Cheetos so appealing. The scientist honed in on the product’s “vanishing caloric density,” a phenomenon of the food melting in your mouth in a way that tricks your brain into thinking the food has fewer calories, allowing you to eat more before becoming satisfied, a trick Moss compares to popcorn.

It’s the sort of anecdote that makes Salt Sugar Fat an appealing mix of nutrition-minded facts about familiar junk food brands augmented with first-hand insider information that gets behind the “it’s bad for you” rhetoric we all know to be true and into the reasons why, nonetheless, we still crave it.

Moss argues the key to these cravings are the foods’ balances of sugar, fat and salt, which processed food companies carefully formulate to achieve the “bliss point,” that right mix of taste and texture that will attract the most consumers. Each of these ingredients acts on consumers differently, and it was fascinating to learn about this. Sugar, for example, is more attractive to children than adults, and there’s a point to which consumers start to like a product less when it has too much sugar. Getting the sugar right is important, since this is the element in the trio that will “hook” you, unfortunately quite literally for some over-eaters who must swear off sugar to counter obesity. Fat, in contrast, has no bliss point—the more fat the better.

Salt is perhaps the most elusive one, given that it’s not really a food (it’s a mineral and therefore contains no calories). I was already aware that salt is a flavor that your palate can become used to, requiring increasingly greater quantities for you to really taste the saltiness (I’ve read this is why some chefs are prone to over-salting their food). What I didn’t realize is how this state isn’t permanent. Anyone who craves salty snacks need only abstain for a period of time and their craving for salt will go away. Once pleasurably salty foods will, with time, taste over-salted, an experience I had eating McDonalds after years of swearing off such fast-food restaurants.

Some may be surprised to find that many of the industry insiders Moss spoke to do not eat the snacks they helped to perfect. Some purposefully avoid them, while for others, junk food is just not part of their lifestyle. After all, these are highly paid executives, and it’s an unfortunate truth that unhealthy food is most consumed by—and therefore most targeted to—lower income brackets. It costs more to eat a diet of varied fresh fruit, vegetables, lean meats and whole grains from farmers markets and upscale grocers than it does to subsist on processed convenience foods from the corner store.

These economic issues have been touched on before, most effectively by Tracie McMillan in The American Way of Eating but also Michael Pollan in The Omnivore’s Dilemma. While Pollan suggested that Americans should be willing to pay more for their food to eat better, McMillan rightly pointed out the unfairness of this, given that Americans pay more for other services (like childcare) than other countries. While Moss’ book gives good context to these broader socio-economic issues, its greatest value lies with its insider views, particularly the insights into the foods’ science.

While Moss deftly describes the science he sees at work, he’s not taken in by it, particularly the companies’ efforts to address obesity, a problem they are aware of and willing to wade into but not at the cost of their profits. His critique of the Nestlé research center in Switzerland reminded me of Pollan’s recent takedown of molecular gastronomy in Lucky Peach. In both cases, the writers see talented, smart people who could be solving real problems but are instead engaged in work with less lofty goals:

“The research center was all very impressive and state-of-the-art…but ultimately it was disappointing. By the end of my visit, I came to realize that if Nestlé was going to save the world from obesity or any of the other ill effects of processed foods, it wasn’t going to be in our lifetimes. The food that people bought in the grocery store was so perfectly engineered to compel overconsumption that Nestlé’s scientists, for all their spectacular technology and deep knowledge of food science, were finding it impossible to come up with viable solutions.”

Overconsumption is a key concept in Salt Sugar Fat. Moss writes about how companies, particularly the soda makers, target their marketing to “heavy users,” people who already use their product a lot that they believe they can sell more to. It’s easy to see how this has played out at the store. As a kid, I remember soda was sold in single-serving cans (12 oz.) and bottles (16 oz.), and the multi-serving two-liter size. Today, 7-Eleven sells a Double Gulp—a serving meant for one person—that’s 64 ounces,  almost as much product as the two-liter package once meant to serve a group. A 64-oz. Coke contains the equivalent of 44 teaspoons of sugar, nearly 1 cup or as much as I would put in a batch of cookies.

When Americans can so easily buy a 64-oz. Coke but have limited options for buying fresh carrots (see the USDA’s new food deserts map), it’s no wonder that obesity continues to be a problem. With increasing healthcare costs that can be linked back to diet (diabetes, hypertension and heart disease, to name a few now common afflictions), something must be done to get Americans out of the convenience store and back in the kitchen. Moss isn’t offering any solutions, but it’s a wonderful contribution to the “problem definition” discussion that those concerned about how we eat are having these days.
Posted by Cook In / Dine Out at 12:00 AM