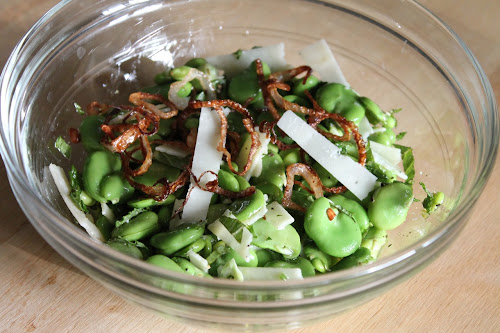 I first learned about fava beans when I was 14. Not because I ate some, but because a notable psychopath liked to enjoy them with liver and a "nice chianti." I get chills thinking about that movie, which I got for Christmas last year. I decided it was time try Mr. Lecter's favorite legume for myself. 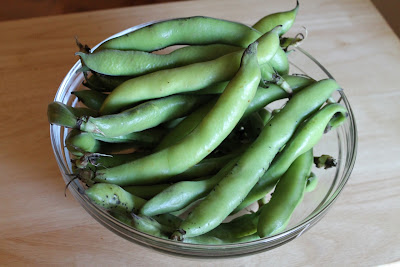 Fava beans are not particularly common, as they are available only seasonally and require quite a bit of labor. Shelling the beans is a two-step process: first, you have to remove the beans from their large pods, which is pretty much like shelling peas or any other bean that comes in a long green pod. Then, after blanching, the beans outer light green casing has to peeled off to reveal the smaller light green bean on inside.

This last step is the hardest to get the hang of. The thing that worked best for me was to hold the bean from the end that was connected to the pod and pinch the other end with my finger nails until the skin tears through. Then I gently squeezed the bean through the opening I'd made. 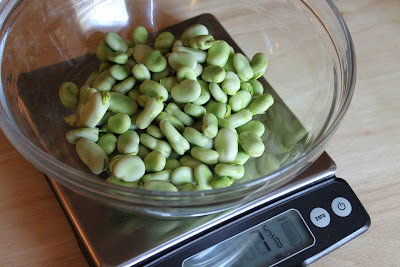 The other challenge with fava beans: buying enough. Because of the two-step peeling process, they lose a lot of bulk. I thought I had bought what seemed like a lot of beans: about 32 pods, which filled a produce bag at Whole Foods. When shelled, it was about 1/2 lb. of beans. In the end, after peeling, there wasn't even a cup.

Despite these challenges, the beans were quite delicious. Somewhat like lima beans but with a smoother texture and more robust flavor. I'd definitely buy them again, despite the prep work. Makes a good Sunday afternoon activity. 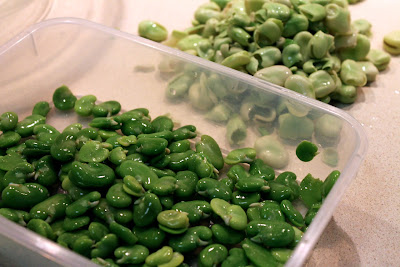 Fava beans, mint and pecorino romano are a classic combination. To that, I added some fried shallots for a little crunch and served this as a side dish to broiled halibut with herbs and butter.

Makes a side dish suitable for 2 people to share

1. Remove the fava beans from their pods and discard the pods. Bring a large pot of water to boil. When boiling, add the beans and cook for 2 to 3 minutes. While beans cook, prepare a bowl of ice water. Transfer beans from boiling water to ice water bath and allow to chill. Using a paring knife or your fingers, carefully remove the outer layer of the fava beans to reveal the bright green bean inside. Transfer the shelled beans to a medium bowl and discard the outer casings

2. Heat the vegetable oil in a medium saucepan over medium heat. When hot, add the shallots and fry until lightly browned and crispy, about 4-6 minutes (watch carefully to prevent burning). Transfer cooked shallots to a paper towel-lined plate to cool.

3. Whisk together the olive oil, vinegar, parsley, salt and pepper. Add dressing and mint to the bowl with the fava beans and toss to coat. Serve beans topped with the fried shallots and shavings of pecorino romano cheese.
Posted by Cook In / Dine Out at 12:00 AM