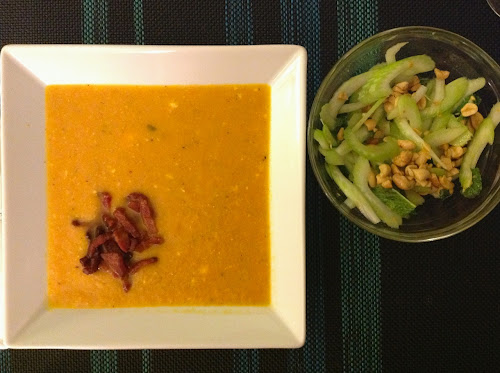 Spring has arrived, but as lamented recently by The New York Times, that doesn't necessarily mean spring produce is available. It's starting to appear though: I saw fresh strawberries at the supermarket this week and the asparagus is looking great. The really good selection won't arrive for me until June, when my local farmers market returns from hiatus.

Until then, I'm stuck with supermarkets (or farmers markets further afield). That's not necessarily so bad. Even pretty typical produce can be satisfying if made well.

When it comes to supermarket produce, carrots and celery are always available and generally in great quantities. Using it up can be a challenge, particularly the celery. 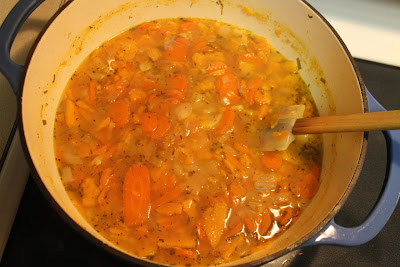 Cynthia Damico, a frequent contributor to the blog A Reluctant Foodie, offered up this simple carrot soup last year.  I followed a few of her suggestions for switching it up: adding sweet potatoes, seasoning it with tarragon and finishing the soup with Greek yogurt.

I paired this soup with a Celery and Peanut Salad inspired by the popular celery stick with peanut butter snack. 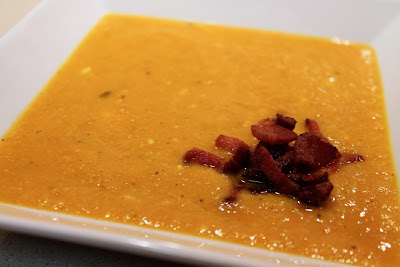 Carrot-Sweet Potato Soup with Bacon
Adapted from Carrot Soup by Cynthia Damico for A Reluctant Foodie as adapted from EatingWell:  EatingWell on a Budget (2010), March/April 2011

1. Heat butter and olive oil in a Dutch oven over medium heat. Add onion, shallot and garlic, season with salt and cook until softened, about 6-8 minutes. Add carrots, sweet potato, tarragon and thyme, stirring to combine with onion mixture and cook for about 5 minutes. Add chicken stock and water, increase heat to bring to a boil, reduce heat and simmer for 30 minutes.

2. Heat a medium frying pan over medium heat. Cook bacon lardons, remove with a slotted spoon and transfer to a paper towel-lined plate.

3. Add pepper to soup. Puree with an immersion blender until smooth. Remove from heat and stir in Greek yogurt. Serve in bowls topped with bacon.
Posted by Cook In / Dine Out at 12:01 AM