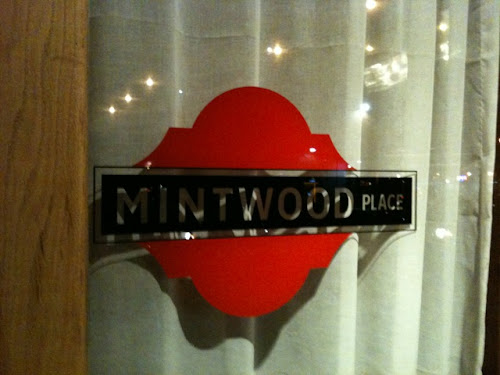 A slate of hot new restaurants in D.C. have already opened since the year began a few months ago. None are hotter than Mintwood Place, the new first-floor space in the Adams-Morgan building occupied by Perry's, best known for its drag queen brunches.

There are no gimmicks in Mintwood Place, just really good food. It was the best restaurant meal I've had in months.

We started dinner with cocktails. I had the rather potent Woodrow Wilson, a mixture of genever gin, elderflower liqueur, champagne and hum liquor (botanical-infused rum). Chris had the Scrooge, also with rum plus a rather potent spiced ginger ale, molasses and lime. Both were good, particularly the Scrooge. In addition to a creative list of cocktails, the restaurant has a nicely varied wine list, covering European and domestic options at a range of prices. Although I was intrigued by a Sicilian Nero d'Avola, after conferring with the server, we opted instead for the hearty Annabella Cabernet Sauvignon from Napa's Michael Pozzan winery.

Rather than go for high-concept, Mintwood Place's entrees cover familiar territory, but do so with style. The menu includes a selection of seafood dishes plus simple, familiar classics like a burger with fries, hangar steak and cast-iron chicken. The menu's simplicity reminds me of Central Michel Richard, so it comes as no surprise to find out that Mintwood Place's chef, Cedric Maupillier, is a Central kitchen alum.

We shared the roasted pork for two, which was divine, cooked to perfection with a coating of rosemary and salt and served with a mouth-watering charcutiere sauce (the little bit we had leftover made great sandwiches the next day). We had the option of any two sides, a list that included roasted mushrooms and cauliflower, whole grain risotto and fries. We opted for the garlicky grilled broccolini, which came out nicely charred, and the braised puy lentils, which were just magnificent. According to Washington Post's First Bite preview by Tom Sietsema, the dish includes miso, olive oil and mashed potatoes.

The starters list is where Maupillier shows particular creativity. Chris had the goat cheese & beet mountain pie, a sinfully delicious slab of roasted beet encased in goat cheese and fried with a crispy coating served with additional roasted beets and lettuce. Mine was good too: grilled fresh asparagus served with cool, creamy burrata and garlic.

We had dessert waiting for us at home, so we skipped the last course, but hopefully they'll still have the Baked Alaska flambé next time we go (here's a picture from DCist).

Adams-Morgan has a lot of restaurants, but few really good ones. Mintwood Place definitely helps tip that balance in a favorable direction.