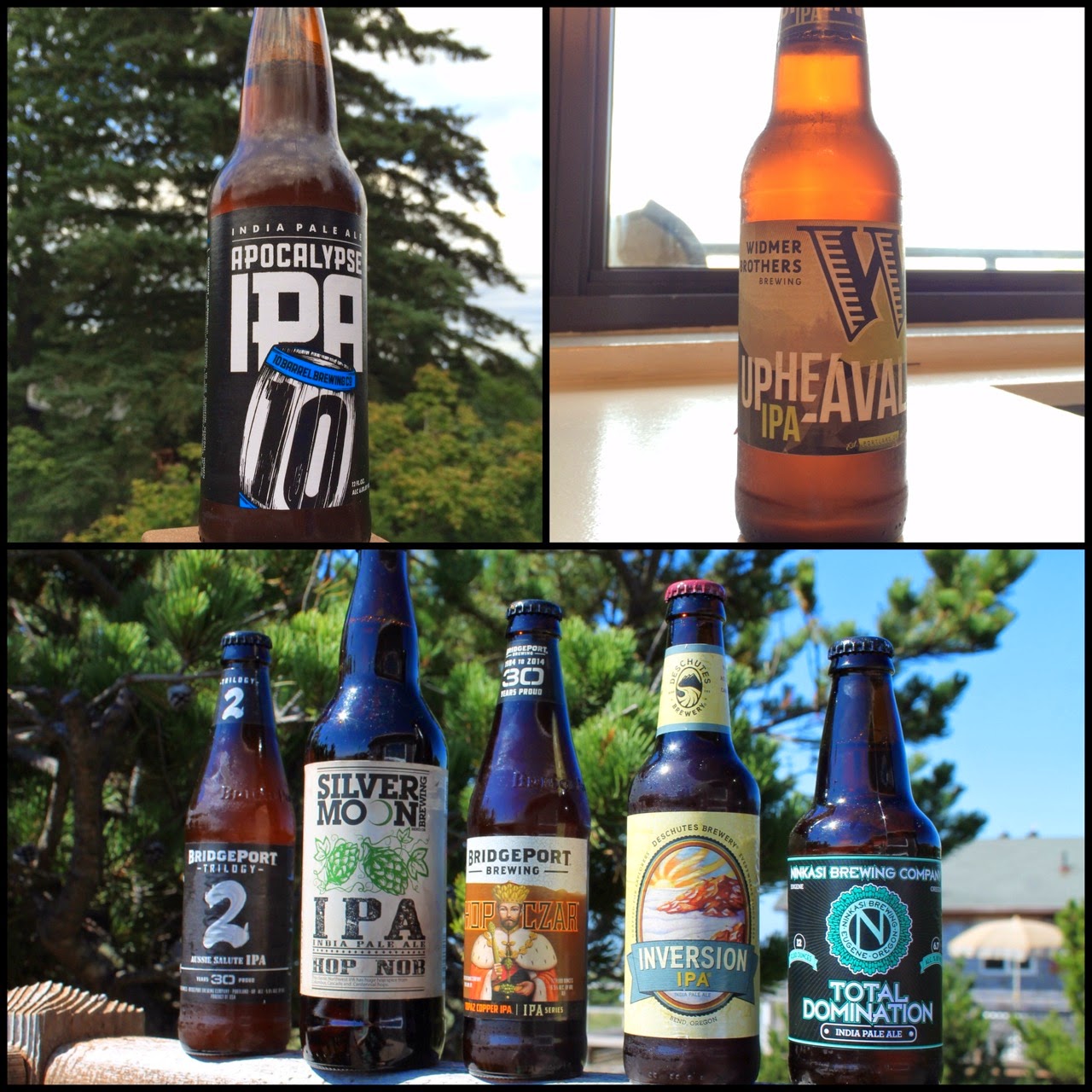 A trip to Oregon isn't complete with an IPA...or nine as the case may be for us this year. We were pretty aggressive in trying a variety of them this year, both old favorites and a few we hadn't had before.

Oregon IPA of the Year: Laurelwood Workhorse IPA. We first tasted this beer over lunch with friends at a Laurelwood Pub in Portland's Sellwood neighborhood and were bowled over by how good it is. When we went to stock up on beer for the beach house, Fred Meyer was sadly sold out. But then when we made a return trip to Freddie's because we needed some other things, I was delighted to see they had it back in stock and snagged a six-pack. This beer is assertively hoppy as we like, but it's more than just hoppy, with a bit of grapefruit nose and even a little of sweetness.

Other favorites: We've had Deschutes Brewery's Inversion IPA before and were happy to revisit it this year. We've been into hoppy IPAs for years, although lately I've learned that I like an IPA that isn't just hoppy. I like it to be balanced with a little citrus or fruit. That's why we loved Laurelwood's Workhorse IPA and also why Inversion IPA is another favorite. It's also why Ninkasi's Total Domination IPA, our favorite in 2012, is no longer our "top favorite" but rather one among several we like, as the strongly bitter ale doesn't offer as much other flavors. 10 Barrel Apocalypse IPA was also pretty bitter, although not as much as the Ninkasi IPA and offered a bit of malty flavor. I'll also give props to Bridgeport's Hop Czar IPA, which nicely balances its bitterness with a bit of spice and fruit.

Others sampled: A definite mis-match for our taste was the Pelican Silverspot IPA. This IPA is made in the English-style, rather than the American West-Coast style we love, and the difference is noticeable. It's hopped, but not nearly as bitter as the usual IPA and noticeably maltier in taste. Interesting, but just not our thing. We were also disappointed by the Widmer Upheaval IPA, which wasn't very flavorful (full disclosure: we tasted this one in advance of our trip, as I spotted it on the shelf at Whole Foods. I must say though, it stings that Widmer, along with Rogue, are the only Oregon beers I see with regularity in D.C. I wish some of these others--Deschutes Brewery this means you--would get wider distribution here). Bridgeport's other beer we tried, the Bridgeport Trilogy 2: Aussie Salute, part of a limited-release series, is a pretty light IPA, and thus not really something to sate hopheads like us. Lastly, Silver Moon's Hop Knob IPA wasn't bad, but just not very memorable as compared to some of the other hoppy IPAs we sampled this year.
Posted by Cook In / Dine Out at 12:00 AM