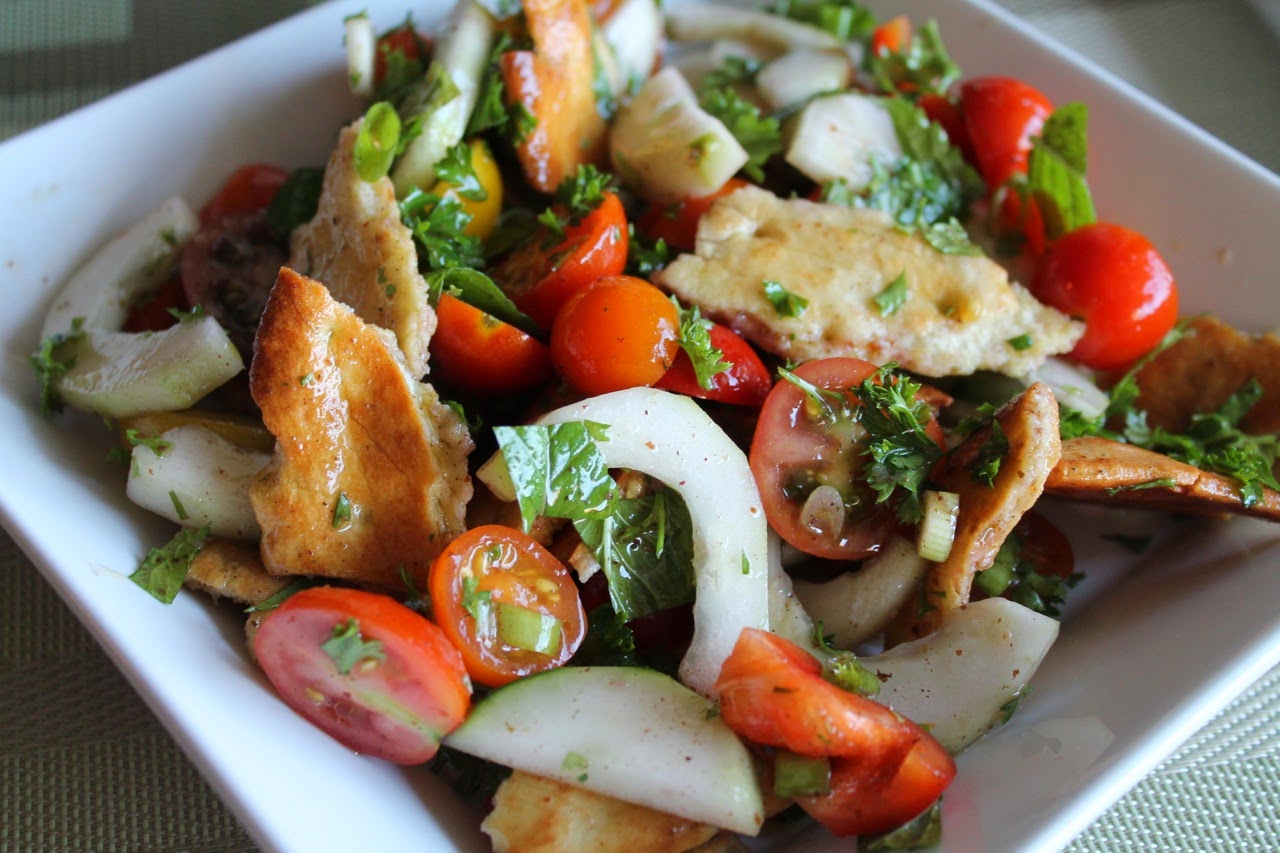 For years, I've been a devotee of heirloom tomato panzanella during summertime. Once New Morning Farm starts delivering its beautiful, flavorful rainbow of seasonal heirloom tomatoes to my neighborhood every Saturday morning, that's all I want for dinner on Sunday. Most of the rest of the year we eat wine and cheese for Sunday dinner, but not from around late June to late September when we instead gorge on fresh tomatoes, cucumbers, olives and dressing-soaked toasted Tuscan bread.

Then, this year, I learned about fattoush, a similar Middle Eastern dish. My spidey senses began to tingle as I thought about the possibilities. I knew I had to try it.

We ordered fattoush during a recent dinner at Zaytinya. Although we generally liked everything we ate that night, the fattoush was actually our least favorite thing. Nonetheless, I still wanted to try making the salad myself.

I found a recipe on the Bon Appétit website that seemed like a good starting point for my salad. I also consulted one of my cookbooks, The New Middle Eastern Vegetarian by Sally Butcher, who writes that fattoush (or rather fatoush, as she spells it) is "eminently tweakable," open to all sorts of ingredients that you may have on hand.

In that spirit, I added red pepper to the Bon Appétit recipe and omitted the lettuce. I think some olives or cheese--feta or fresh mozzarella--would be good in this too.

Finding a couple of the ingredients for this salad proved particularly challenging. I couldn't find pomegranate molasses anywhere. I asked the Washington Post Food section staff about this during a recent chat, and Bonnie Benwick told me I could make it myself by reducing pomegranate juice. Of course! I picked a bottle of POM at Whole Foods, skipping over the other pomegranate juice options that where either made from concentrate or included other juices (in The Bar Book, Jeffrey Morgenthaler said they aren't any good anyway and I trust him).

The other elusive ingredient was ground sumac. Whole Foods had a spot for it on the spice shelf, but according to the employee I asked for help, they hadn't stocked it in months. I did, however, find a za'atar spice blend there that listed sumac as its primary ingredient. So I bought that and used a fine mesh sieve to filter out the larger ingredients, which were mostly sesame seeds and dried thyme.

Fattoush
Adapted from a recipe in Bon Appétit

Note: You can make pomegranate molasses yourself if you can't find it in the store: Combine 1 cup pomegranate juice, 2 tbsp. sugar, and 1 tsp. lemon juice in a small saucepan. Bring to a boil. Cook until reduced to 1/4 cup of syrup. Allow to cool.

1. Make the dressing: Soak ground sumac in warm water for 15 minutes in a small bowl. Add the lemon juice, pomegranate molasses, garlic, vinegar, mint and salt. Whisk to combine, then whisk in the olive oil.

2. Prepare the pitas: Preheat the oven broiler with the rack adjusted about 5 inches below it. Place pitas on a baking sheet and toast under the broiler until lightly browned, about 2 minutes per side. Remove from oven and allow to cool a bit, then tear into chunks about 1 to 1 1/2 inches wide. Add to a large bowl, drizzle with olive oil and toss to coat.

3. Make the rest of the salad: To the large bowl with the pitas, add the tomatoes, cucumber, red pepper, scallions, parsley and mint. Pour about 3/4 of the dressing over the salad and toss to combine. Add additional dressing as needed. Serve immediately in shallow bowls.
Posted by Cook In / Dine Out at 12:00 AM