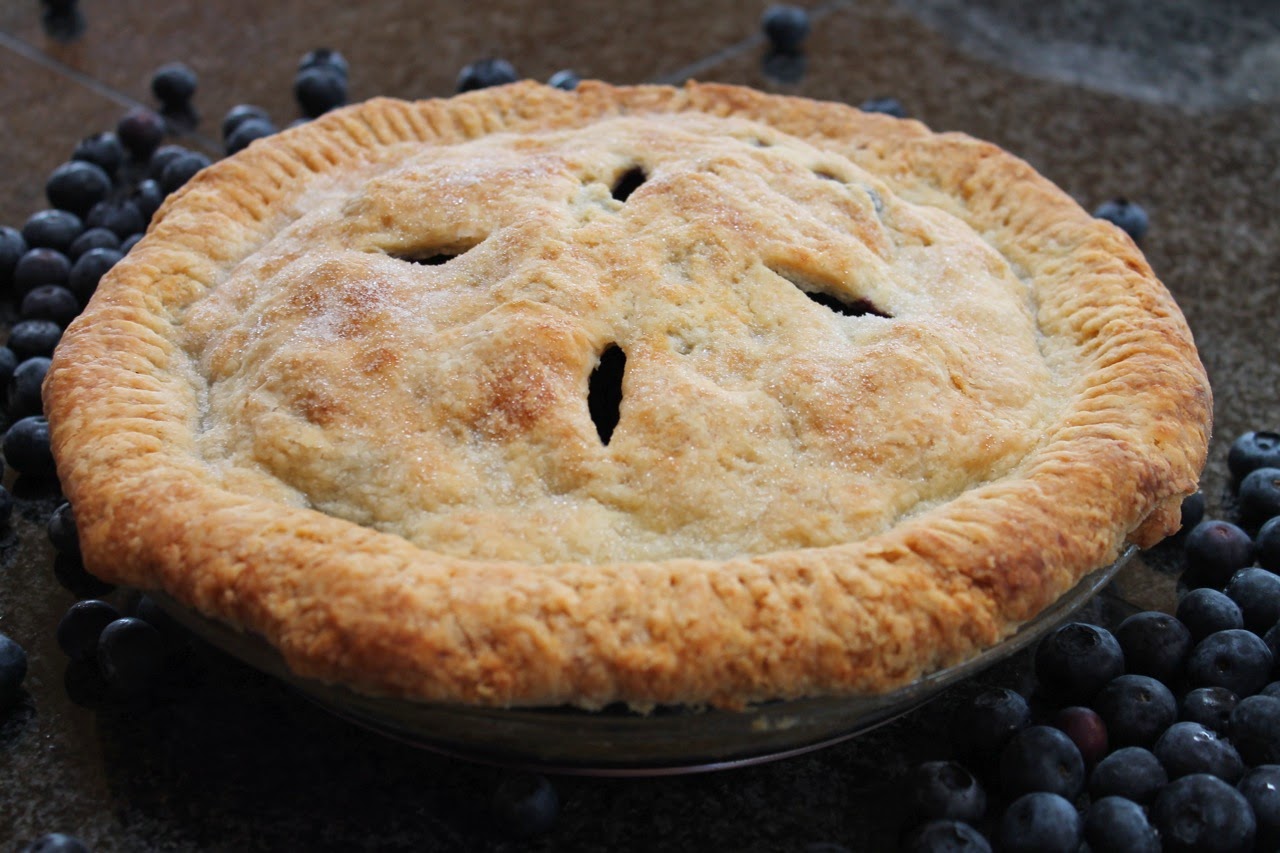 Not long ago, we spent our annual week in Oregon, which we spent mostly at the Oregon coast with a brief visit to Portland. As usual, the weather at the coast was a nice break from the humid East Coast summer, with minimal rain and even some sun. And we ate (and drank) like kings. All this week I'll be writing about what we enjoyed, starting with this fabulous blueberry pie.


Blueberries grow in a lot of places, but the berries I can get on the East Coast don't hold a candle to what's available in Oregon. The blueberries I see in D.C. are small, expensive and sometimes a little sour. Frankly, I can't bring myself to buy them, since I know they can be so much better. In Oregon, blueberries are plump, flavorful and cheap. They are in season right now and are just simply fabulous. We used to buy them from a farm as we passed through the rural rolling hills on the way to the beach. Unfortunately that farm doesn't sell to the public anymore, but even the berries at the grocery store this time of year are excellent. 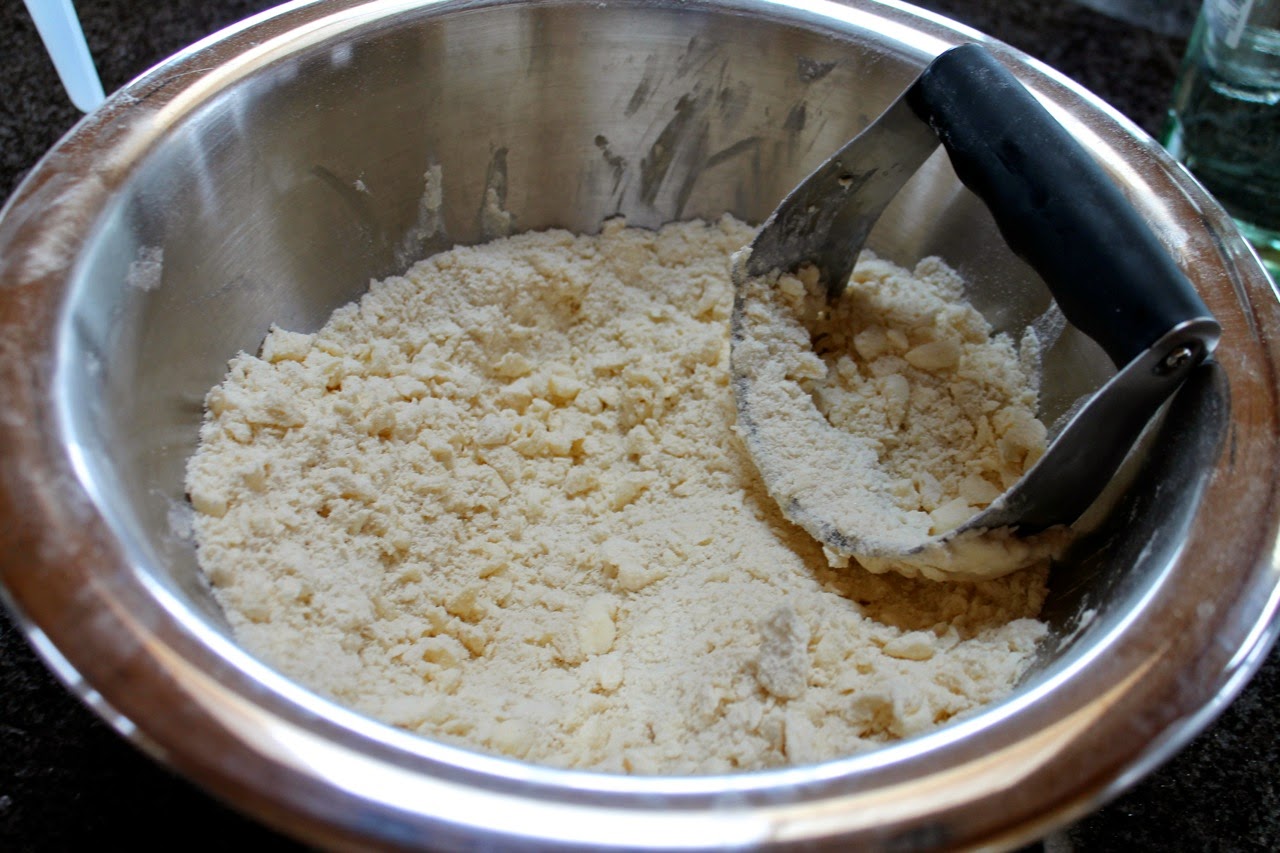 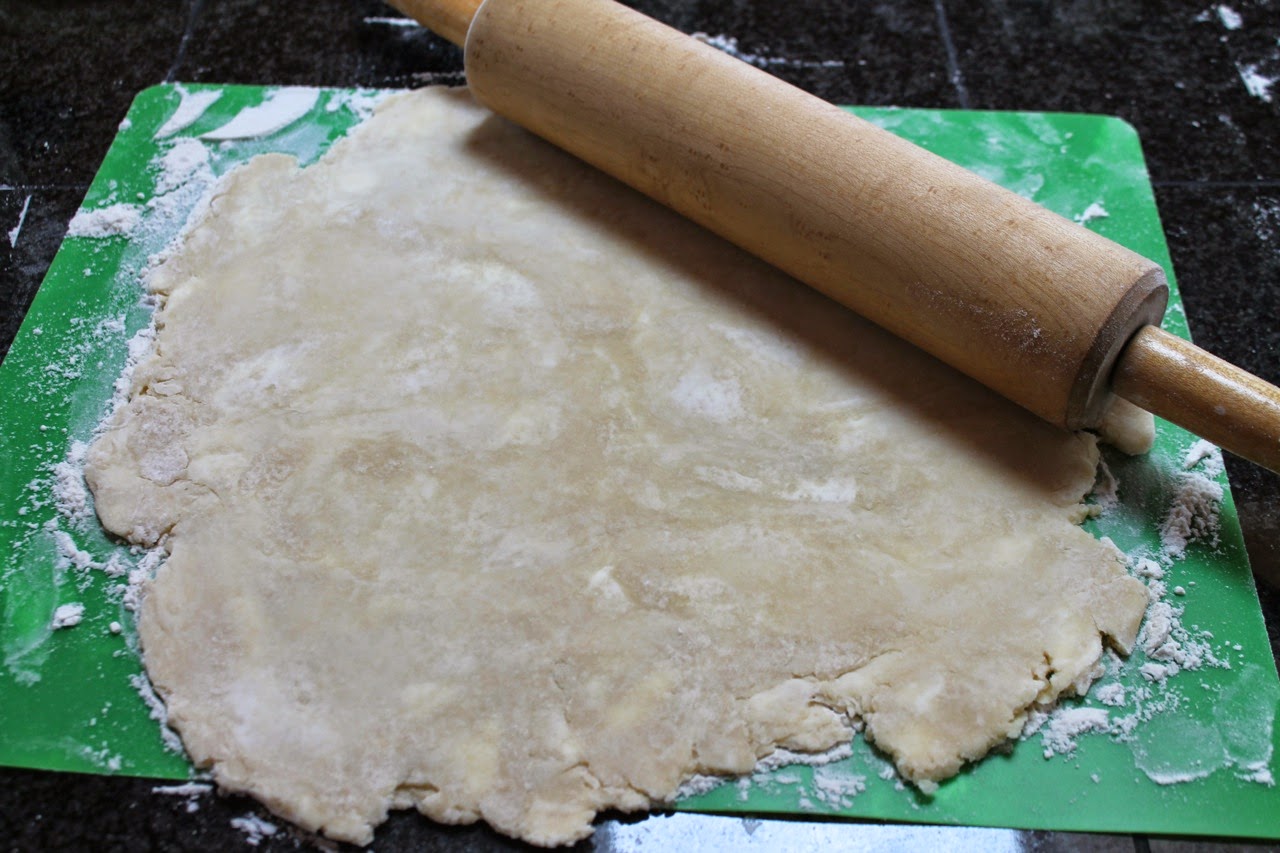 This particular project was inspired by a movie. A few months ago, we watched Labor Day, and ever since I've been in the mood to make pie. The scene where Josh Brolin's character makes a peach pie is one the film's most memorable: the step-by-step making of the rustic dough, prepping the fruit and baking it to a browned finish. It's a great depiction of cooking on celluloid. Ever since, I've been hungry for good pie. I'd never made a blueberry one before and decided to give it a shot.

An important step in making berry pie is mixing the berries with some kind of thickener. A lot of recipes call for either tapioca or cornstarch, but I had neither on hand when I made this pie. Instead I just used flour, but wasn't sure how much to use. I consulted recipes showing a range from as much as 1 cup to as little as 1/4 cup. A whole cup struck me as excessive, something that would result in a gooey filling. Yet, I wanted to make sure that I used enough so that the filling retained some structure and didn't just ooze out when the pie was cut. My friend Jason, the Aubergine Chef, suggested using just enough flour to evenly coat the berries. Along with the 3/4 cup of sugar, this turned out to be about 6 tablespoons (a little over 1/3 cup). 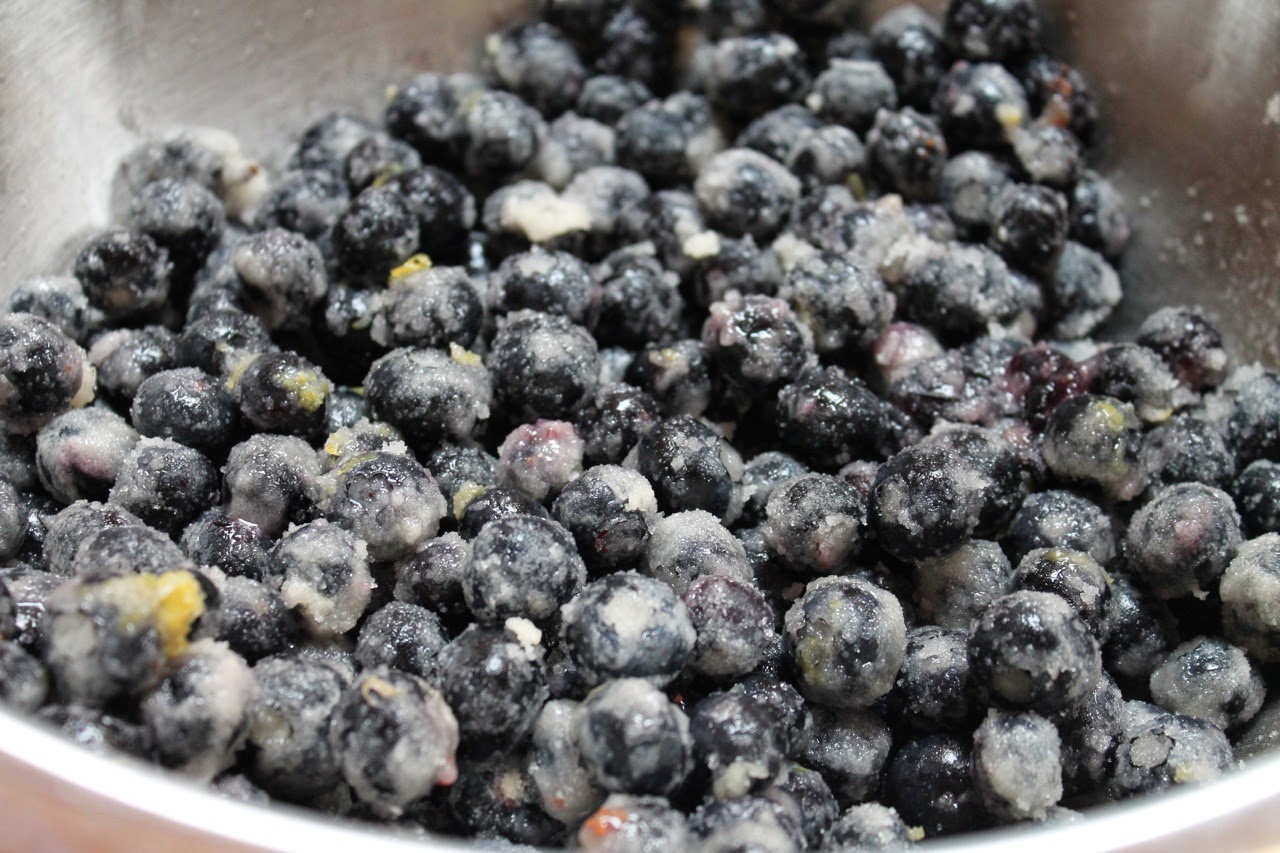 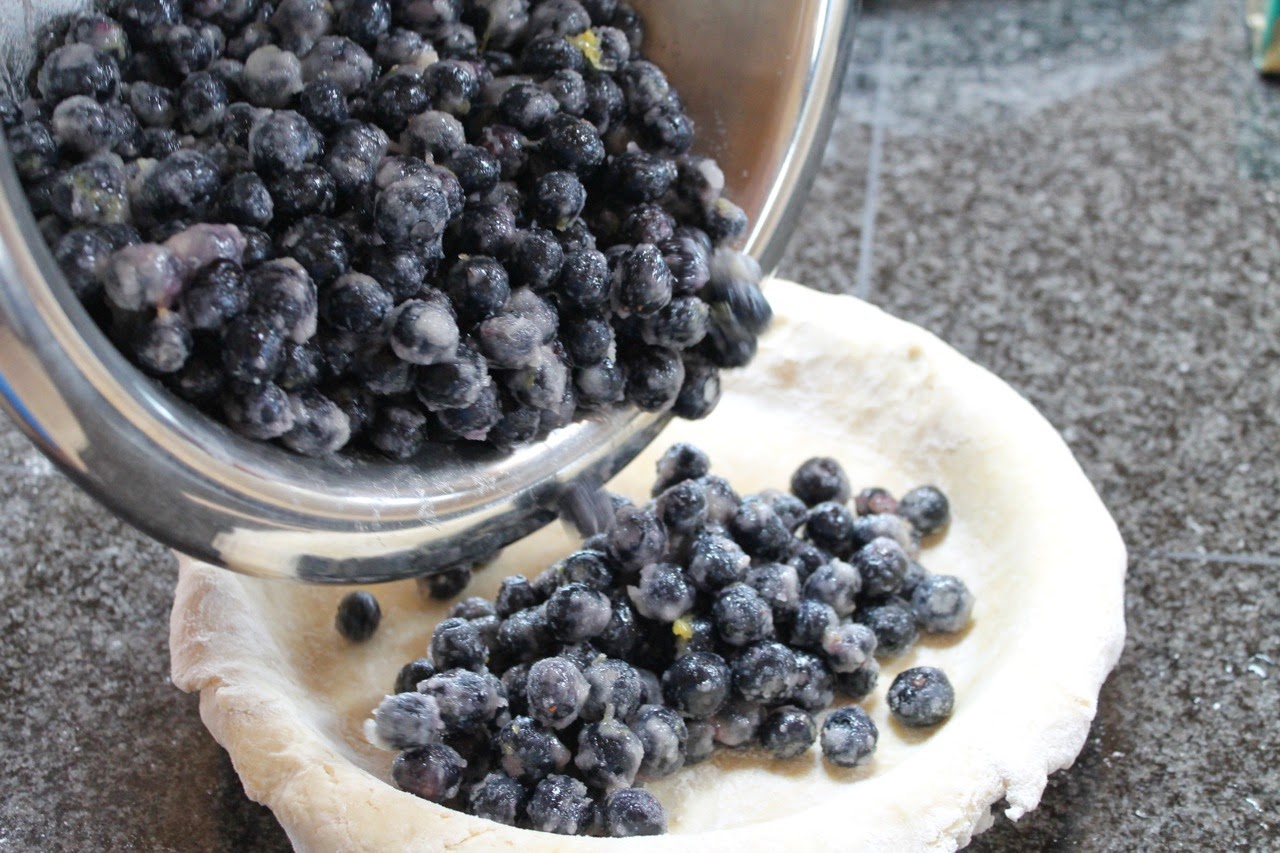 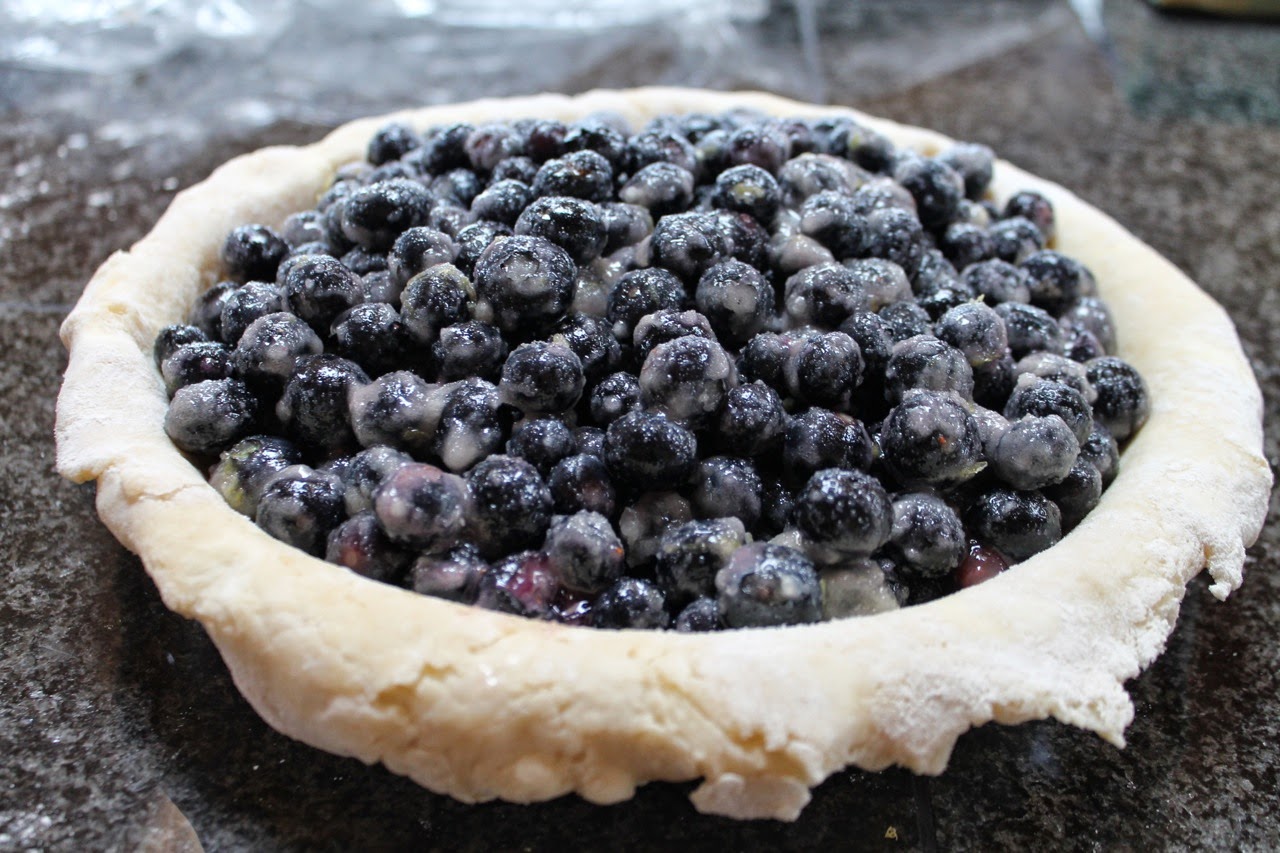 For the dough, since I'd had good luck using vodka to promote flakiness in the apple pie, I added rum (since I didn't have vodka) to this pie's crust. It worked just as well and, despite rum's stronger flavor, it also wasn't noticeable.

Otherwise I kept the pie pretty simple. I didn't add additional spices or brush the top with egg or milk (I did sprinkle it with sugar). The filling turned out really nice, not gooey but not too runny either. And it was just sweet enough. I recommend tasting your berries first to judge whether you might need a little more or a little less sugar.

Despite this being my first blueberry pie, I was pretty pleased with it. Okay, I loved it. I went a little overboard with the crust edge, which was so thick it was like a cookie, but that provided a good tool for soaking up all of the berry sauce left in the plate after devouring the pie. 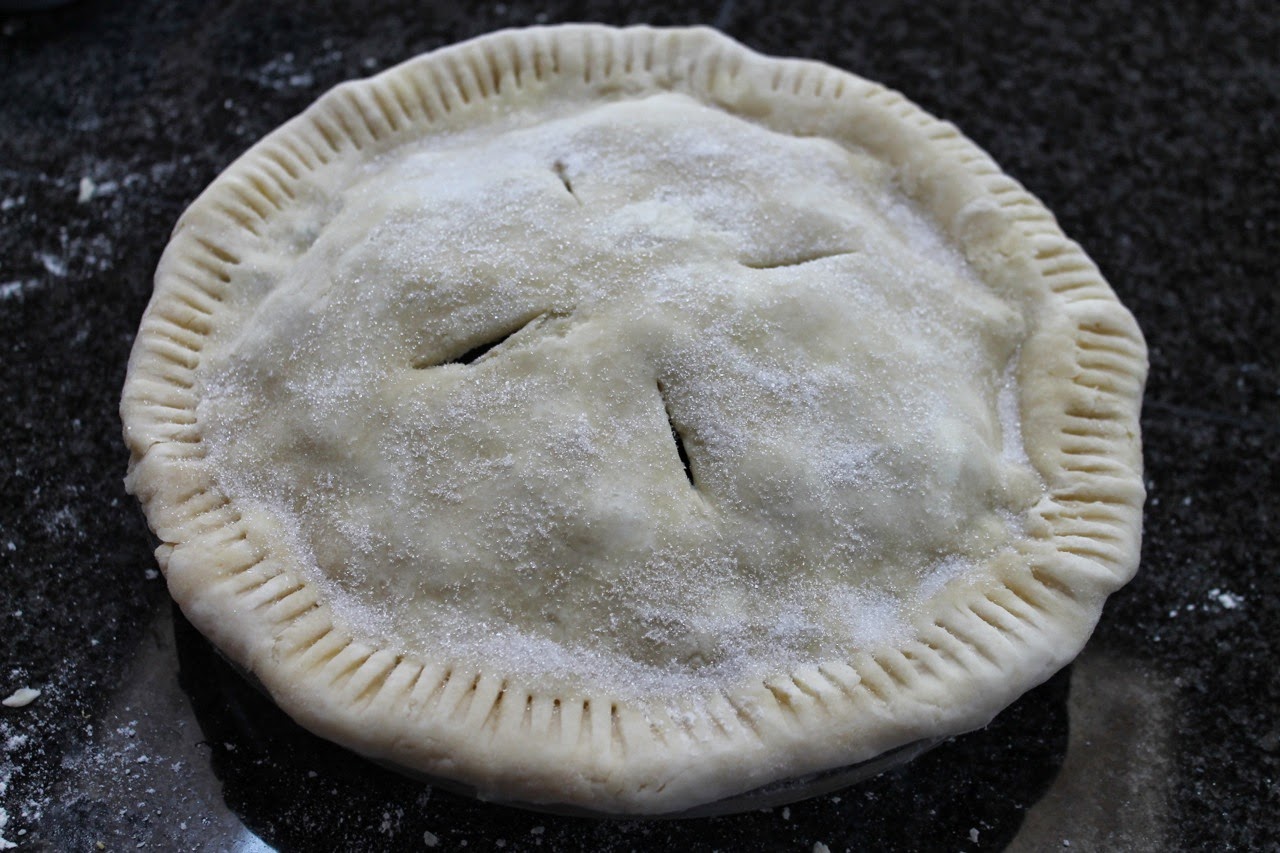 1. Preheat the oven to 450 F. Rinse the blueberries and examine them to remove any bad ones (discolored, shriveled or damaged). Also remove any rocks (yes, I've found rocks in a carton of blueberries) or remaining stems.

2. Place the blueberries in a bowl and add the sugar, flour, lemon zest, lemon juice and salt. Toss to evenly coat the berries.

3. Pour the berries into the pie plate with the dough, mounding them slightly in the middle. Place the other pie crust on top. Using scissors or a knife, cut around the dough so there is no more than about an inch hanging over. Pinch the two layers of pie dough together to seal them and fold them under so the pie dough is flush with the edge of the pie plate. Using a fork, make indentations along the rim of the pie crust to completely seal it.

4. Using a paring knife, make four 2-inch slits in the top of the pie (this allows steam to escape). Dust the top of the pie with sugar. Bake at 450 F for 10 minutes, then reduce heat to 350 F and bake for another 40-50 minutes until the pie is well-browned and the filling is bubbly. Do not underbake the pie. Set the pie on a rack to cool completely before serving.

1. In a large bowl, whisk together the flour, sugar and salt. Cut the butter into 1/2-inch cubes and scatter over the mixture. Using a pastry blender, cut into the mixture, blending the butter into the flour mixture until it resembles coarse pebbles (alternatively, pulse mixture in a food processor until sandy). Sprinkle the ice water and rum (or vodka) over the mixture. With a spatula, use a folding motion to combine the liquid into the dough, pressing down as is folded. If the mixture is too dry to come together, add a little more ice water. Divide dough into two pieces and flatten into large discs. Wrap with plastic wrap and chill for 30 minutes.

2. Remove the chilled dough from the fridge. On a floured surface, roll out the first disc into a circle with a thickness of about 1/8 inch (the circle should be at least 12 inches in diameter). Carefully transfer the dough to a 9-inch pie plate, making sure there are no air pockets between the dough and the side of the pie plate. Leave any overhanging dough attached. Chill the pie plate with the dough for about 15-20 minutes. Roll out the other disc to a similar size and thickness and transfer to a baking sheet to chill in the fridge for the same amount of time.
Posted by Cook In / Dine Out at 12:00 AM