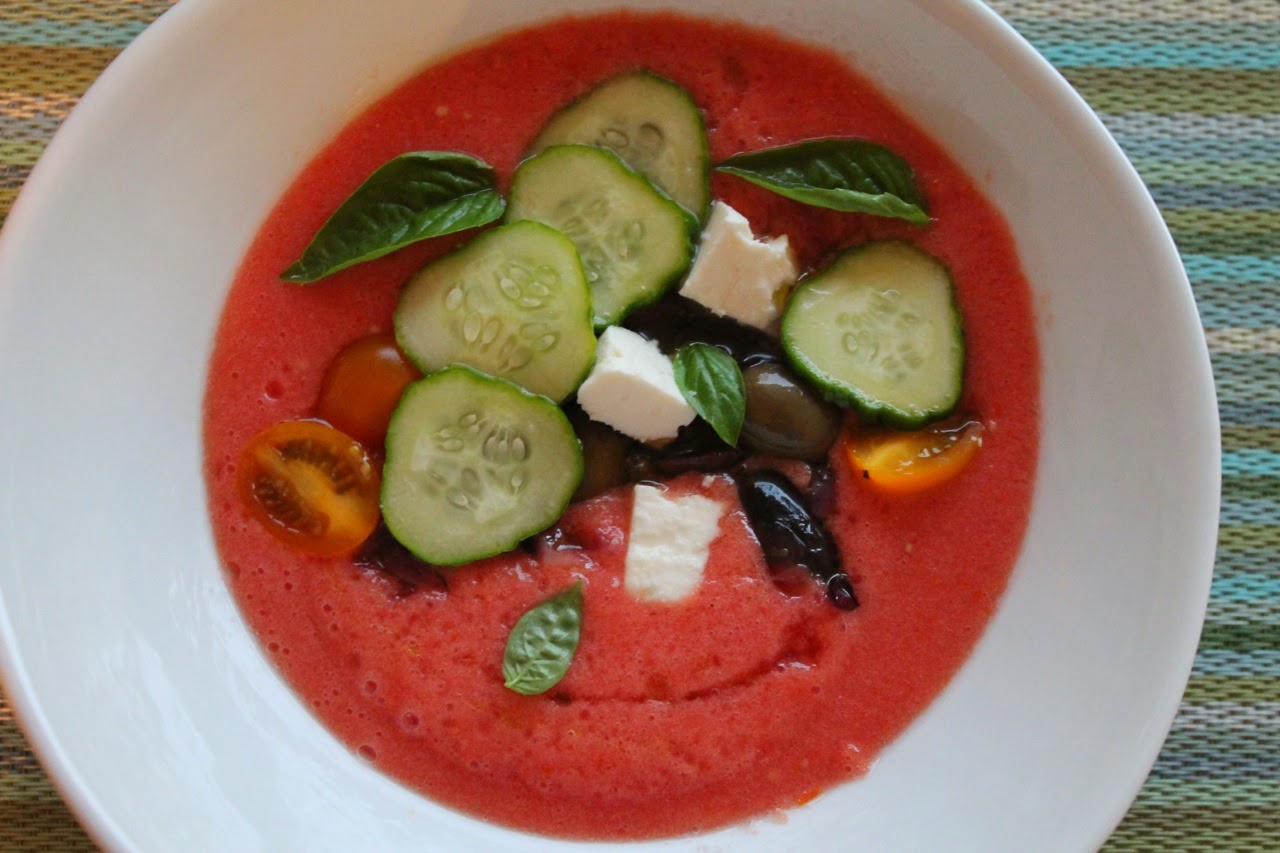 It's official. Momofuku is coming to D.C.! Finally, David Chang, who is from Northern Virginia after all, will make the nation's capital part of his food kingdom that includes a collection of notable restaurants in New York (Ko, Má Pêche, Ssäm Bar, Noodle Bar, Milk Bar--home of the famed Corn Cookie) and a few other cities (Toronto, Sydney), plus the Book & Dax cocktail bar and the totally hip food magazine, Lucky Peach.

I'm celebrating the impending arrival of Chang's cuisine by making this recipe that appeared recently in Food & Wine. If you're in the habit of making gazpacho around now when fresh tomatoes are at their peak, this alternative cold tomato soup might be a welcome way of changing up your cold-tomato-soup routine. Chang's idea was to reinvent Greek Salad as tomato soup. All the elements are there: cucumbers, onion, olives, feta cheese and, of course, tomatoes.

The soup is wonderfully colorful. Because the fresh tomatoes are pureed in a blender, they get a bit frothy and pink. I used sungold cherry tomatoes, adding a little yellow-orange to the color palette. I made a few small changes: instead of garnishing the soup with baby greens, I used a few small basil leaves. I also didn't have sherry vinegar on hand so I used white balsamic vinegar. And, for kicks, I used white pepper instead of black.

Greek Salad as Tomato Soup
Adapted from Tomato Soup with Feta, Olives and Cucumbers by David Chang for Food & Wine

1. Heat olive oil in a medium saucepan over medium heat. Add the onion, olives and oregano and cook, stirring occasionally, until the onion is softened, about 7-9 minutes. Remove from the heat and stir in both vinegars, season with salt, and allow to cool to room temperature (this step may be done ahead).

2. In a small bowl, toss the cucumber with 1/2 tbsp. of the honey and season with salt.

3. Add the chopped tomatoes, 1/2 tbsp. honey, 2 pinches of salt (or more/less to taste) and freshly ground white pepper to a blender and puree until smooth. Pour the soup into shallow bowls. Top with the onion-olive mixture, halved cherry tomatoes, cucumber slices, feta and basil leaves.
Posted by Cook In / Dine Out at 12:00 AM