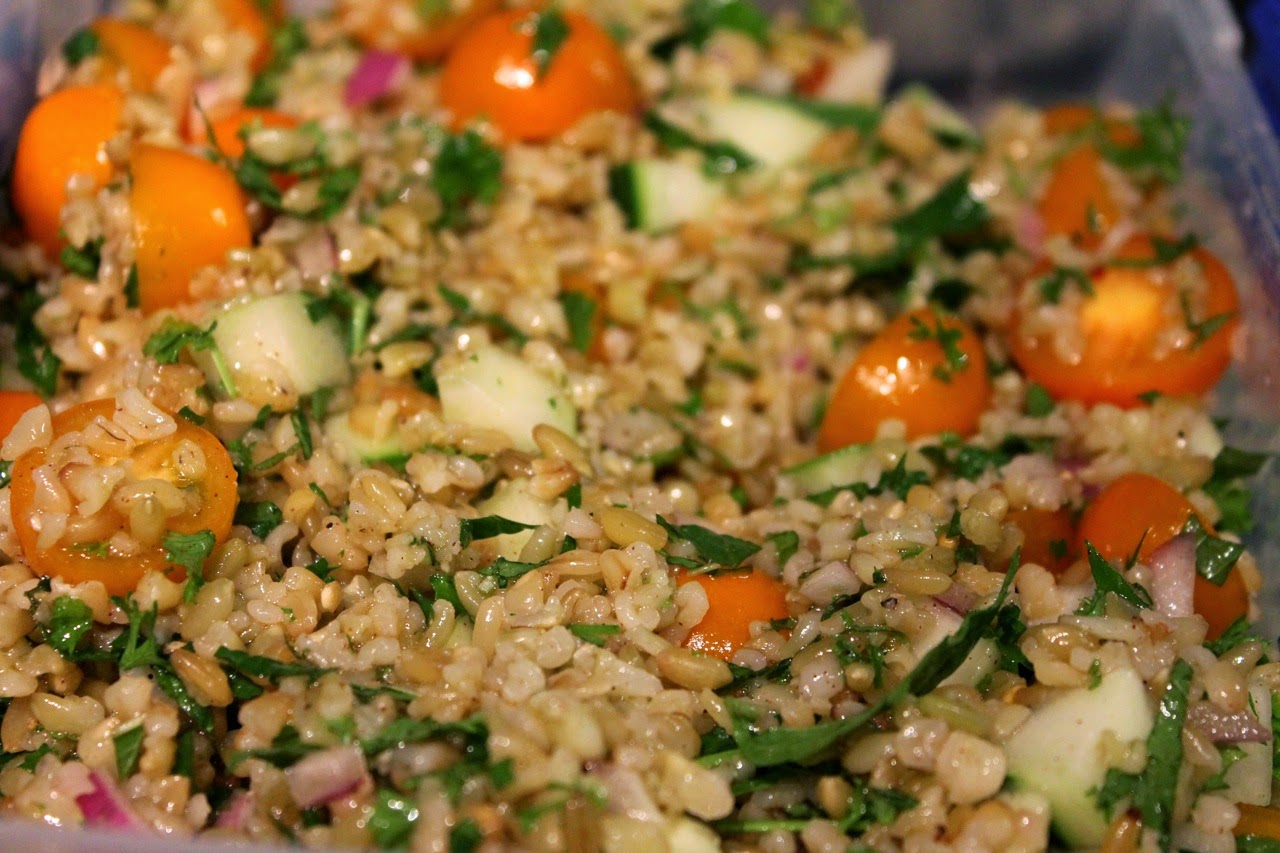 After reading about Freekeh in the Washington Post this last spring, then grilling the Food section staff about where I could find it and what brand to buy, I've been experimenting a bit with the grain these last few months.

What is freekeh? It's a type of green wheat grain (yes, all you gluten-free folks will want to leave now) that's been roasted, imparting a subtly smoky flavor to the grain. I absolutely love finding new and creative ways to add smoky flavors to my dishes, so I knew that freekeh was destined for my kitchen.

Like a lot of other smoky-flavored foods, I've learned that not all freekeh is created equal. The freekeh I bought at Whole Foods, for example, wasn't particularly smoky. I was discussing the issue with a coworker who loves to cook, and she offered to look for it in the Middle Eastern market near her house (what a great resource to have near your home). A couple weeks later, she showed up in my office with a bag of it, which was such a nice thing to do.

That's the freekeh I used in this dish, and it has a noticeable, but not overpowering, smoky flavor. It's a nice way to change up tabbouleh from the usual bulgar wheat. Since freekeh is generally sold cracked, it really is quite similar to bulgar but with more flavor.

This is a pretty standard tabbouleh otherwise: a generous amount of fresh parsley and mint, plus lots of fresh lemon juice. For the tomatoes, I used the crazy-sweet sungold cherry tomatoes from New Morning Farm (the same ones I talked about Tuesday in the pasta with pancetta, roasted tomatoes and fried sage dish). A couple of unexpected ingredients show up in the dressing--allspice, cinnamon and honey--courtesy of a recipe I found from Cook Almost Anything.

I was able to return the favor of my coworker who brought me the freekeh when recently she suffered a freak kitchen accident (the details of which I won't go into here) and had to be home-bound for an extended period. I made a batch of this tabbouleh, and another coworker who lives near her took it to her. That's one of the cool things about being friends with people who like good food: the exchange of it is always a simple and welcome way to show you care.

1. Combine freekeh and water in a medium saucepan with a pinch of salt. Bring to a boil. Cover and reduce heat to medium-low. Simmer for 15 to 20 minutes until the grains are tender. Drain and set aside to cool (note: some whole-grain freekeh varieties may take longer to cook).

3. Whisk together the dressing ingredients. Pour over the salad and toss to combine.
Posted by Cook In / Dine Out at 12:00 AM