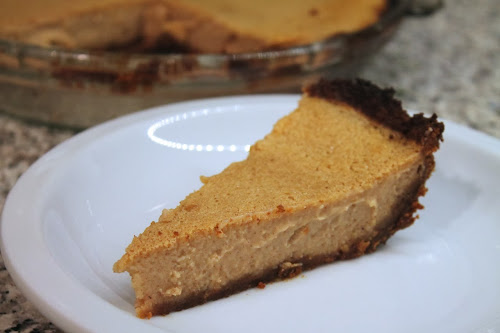 CNN Eatocracy: “Perfect your crumb pie crust,” by America’s Test Kitchen.
If you’ll be trying your hand a crumb pie crust this holiday season, this America’s Test Kitchen piece for Eatocracy is a great first-stop for tips to make sure it’s a success. One big question in crumb crusts—to prebake or not to prebake. ATK goes for the former, which it says helps make the crust cohesive. Seen at top is a photo of a pie with a cookie crumb crust I'll be sharing later this month.

Serious Eats: “How to Make the Norwegian Wood From Clyde Common at Home,” by Lizz Schumer.
Challenged to come up with a cocktail using aquavit, the Scandinavian spirit spiced with caraway and dill, Clyde Common bartender Jeffrey Morgenthaler created the Norwegian Wood, which sounds like an incredibly good cocktail. He blends the aquavit with applejack, yellow chartreuse, sweet vermouth and angostura bitters. Schumer describes the drink as being like “licking a tree branch that has a little sap dripping off the end.” Sounds exactly like the kind of cocktail I’m into these days. I’ve never met the man, but this is yet another example of why Morgenthaler is my favorite bartender.

Washington Post: “Buck’s Fishing & Camping in Chevy Chase still charms at age 10,” by Tom Sietsema.
Washington Post restaurant critic Tom Sietsema has had his hands full with reviewing new restaurants lately, given the shocking number that have opened in the area this year, especially around 14th Street. So it’s nice to see him positively re-review an old favorite this week, Buck’s Fishing & Camping, which just happens to be one of our favorite neighborhood restaurants. I’ll admit, I haven’t yet gotten to sample the work of the restaurant’s new chef, James Rexroad (when I reviewed the restaurant last year, Vickie Reh was still at the helm). This is a good reminder that we need to schedule a visit soon!

New York Times: “Holidays Holding Hands: When Thanksgiving and Hanukkah Collide,” by David Firestone and Susan Brenna.
This year, for the first time in 125 years, Thanksgiving coincides with the first day of Hanukkah, opening up some intriguing food possibilities for tables where both holidays will be celebrated, like Sweet and Sour Braised Brisket With Cranberries and Pomegranate. Writers Firestone and Brenna turned to talented food writer Melissa Clark for help in crafting recipes to honor both traditions at their family’s meal.

Eater DC: “Green Hat Gin Guys Explain Why Gin is Number One,” by George Perkins.
On the occasion of its 1-year anniversary, Columbia Distillers, DC’s first legal distillery in a decade and makers of Green Hat gin, are nicely profiled by Eater DC. Since releasing their iconic first product, they’ve already diversified with spring and fall versions of gin. Rye whiskeys might be on the way soon too. Green Hat gin is great in refreshing, herbal cocktails, like the Nice Rickey, Lady Lawyer and Sara.

NPR: “A Spice Buyer On Why Pepper Is Dirty, And How It Gets Clean,” by Nancy Shute.
Bad news for cooks with an exotic bent: The Food & Drug Administration found that 12 percent of spices imported into the U.S. are contaminated by things like insects and pathogens. NPR spoke with McCormick & Company representative Al Goetze about the issue and what McCormick is doing about it.

Business Insider: “This Map Shows The Most Popular Pizza Topping In Every State,” by Ashley Lutz and Mike Nudelman.
It’s known that pepperoni is the most popular pizza topping in the United States. Now this survey of pizza retailers broken down by state shows that it is also the most popular topping in each state. Talk about cornering the market. Sausage ranks #2 nationally, followed by mushrooms, onions and peppers (man, I could really use a slice with all that right now).