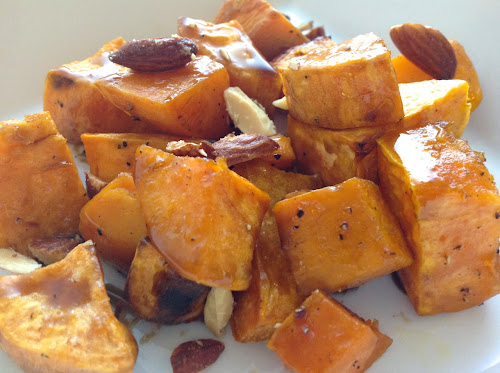 There's a traditional Thanksgiving sweet potato dish that calls for lots of brown sugar and marshmallows. I'm sure it has a place in many hearts, but not mine. I like my sweet potatoes to have more body and flavors beyond just the sweet.

This Bon Appetit recipe is still a pretty sweet dish, but has many other flavors as well--the earthy depth of maple, the smoky-saltiness of the almonds and the bitterness of coffee. That it hits most of the major taste centers is a good thing: this is a well-rounded dish that's sure to please.

I adjusted the recipe only by cutting back the butter, by about half, and adjusting the times for making the glaze, which I found required more time to reduce in the first step and less time in the second one.

1. Preheat oven to 425 F with racks in upper and lower third positions. Add sweet potatoes to a large bowl. Melt 3 tablespoons of butter and combine with olive oil. Pour butter and oil over sweet potatoes, season with salt and pepper and stir to coat. Divide potatoes between two rimmed baking sheets. Roast potatoes until they are tender and start to turn golden brown and crisp around the edges, about 40-50 minutes. Transfer potatoes to a serving platter.

2. While the potatoes roast, make the glaze. Add coffee, maple syrup, brown sugar and espresso to a medium saucepan. Heat over medium-high heat until sugar dissolves and mixture boils. Cook until thick and reduced by half (Bon Appetit's recipe stated this takes 6 to 7 minutes, but in my experience, it took about 15 minutes to reduce the roughly 2 1/4 cup mixture to just over 1 cup).

3. Remove syrup from heat. Stir in bourbon and remaining tablespoon of butter. Reduce heat to medium and simmer until sauce is reduced to about 3/4 cup (again, my experience differed from the recipe, which called for simmering for 40-45 minutes, but I found that after 15 minutes it had reduced enough). Season with salt and pepper to taste.

4. Drizzle sauce over roasted potatoes and sprinkle with chopped smoked almonds.
Posted by Cook In / Dine Out at 12:00 AM