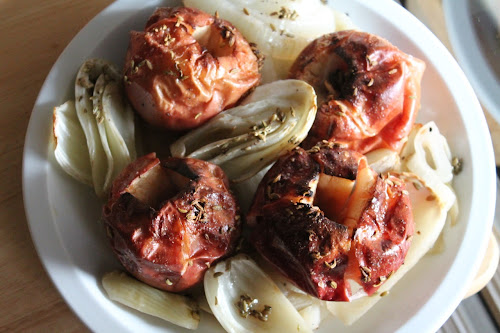 Apples are a Thanksgiving fixture, but except for an occasional stuffing appearance, they don't generally take the stage until the final course.

It's a shame, since apples are such a wonderful fruit, coming in a range of flavors and textures. Sure, they're perfect for dessert, but they play well in savory dishes too. In this recipe, which I found on the Food Network, they pair nicely with the distinctive taste of fennel. 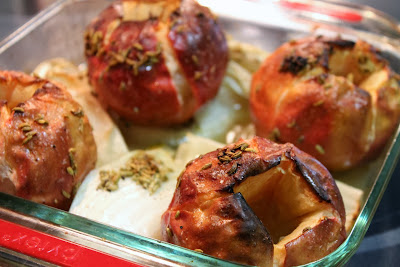 Coring the apples is easy if you have an apple corer--tricker if, like me, you don't, but not impossible. Here's how I did it: using a sharp paring knife, carefully line the knife up to make a vertical cut between the apple flesh and the central core with the seeds, then slice down, making about a 1-inch cut. Repeat around each side of the apple core until you've made a roughly 1-inch square cut through the apple for removing the core (refer to the photo above).

A firm apple that holds its shape while baking works best in this recipe. I chose gala, which worked great.

2. In a small bowl, combine butter with fennel seeds, sugar, salt and pepper. Grease a 9 X 9 baking dish with some of the mixture. Place four onion slices in the bottom of the baking dish. Coat the inside and outside of the cored apples with the butter mixture and place on top of the onion slices. Place the quartered fennel slices between the apples. Bake until the apples are soft, about an hour.
Posted by Cook In / Dine Out at 12:00 AM