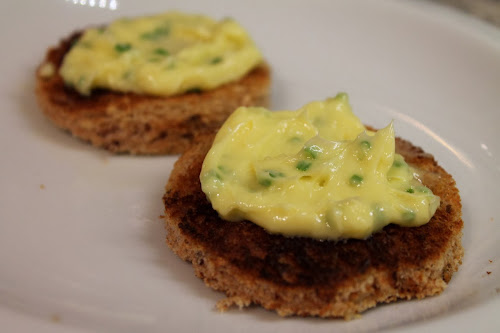 In second grade, we made butter. It was one of those "hands on" things you do as part of learning about Oregon pioneer history. The process was pretty simple: the kids in my classroom took turns shaking a jar of cream until butter solids formed. Eventually, voila...butter.


So yes, making your own butter is simple enough that a 7-year-old (or rather a room 30 of them) could do it. Lacking 60 hands, you can do it yourself in a snap using a stand mixer. Jessie Cross's blog, The Hungry Mouse, walks through the process nicely with step-by-step photos.

Once the butter is made, you're free to dress it up as you like, turning it into compound butter, especially if you're making it to be a spread. I added kosher salt to mine, since the larger salt crystals give a nice burst of flavor in your mouth. My other flavoring was chopped fresh chives. For other compound butter ideas, see this recent Wall Street Journal story by Gail Monaghan.


Since this butter hasn't been treated in an industrial manner, it won't keep as long in your fridge, so be sure to use it within a few days. This recipe makes 1/3 of a pound of butter, or just a little over a typical stick (which is 1/4 lb.). Scale up as needed. It's a wonderful spread for Cheesy Scallion-Corn Biscuits.

2 cups heavy cream, chilled
Kosher salt, to taste (optional)
Chopped fresh chives (optional, may use other herbs or seasonings, including honey, smoked paprika, cracked pepper, etc. Use as little or much as you like)

2. Scoop the butter solids out of the bowl and transfer to a fine-mesh strainer set above a bowl. Using your hands, squeeze the solids together to form a bowl, working to squeeze out any excess buttermilk. This is plain butter, which you can use. Continue the recipe if you want to make compound butter.

3. Allow the butter to soften to room temperature (use the microwave to speed this up if you want, but don't melt the butter). Stir in the salt and chopped fresh herbs. Serve compound butter at room temperature.
Posted by Cook In / Dine Out at 12:00 AM