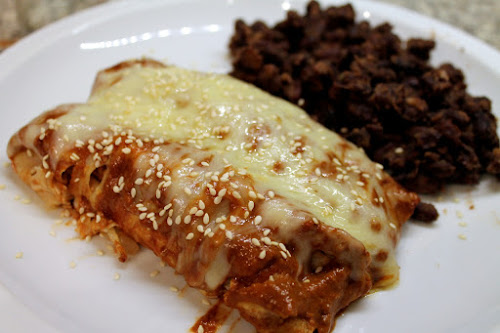 8-2-Eat is my food-focused list series. A perfect Friday distraction.Earlier this week, my friend Laura, who blogs at Mother Would Know, shared her recipe for Not-Quite-Homemade Chicken Mole, which looks delicious and got me thinking about all the dishes I've made with mole sauce or inspired by its flavors--that wonderful combination of spices, chiles, nuts and chiles that is so amazing good. Here's a rundown of all the delicious possibilities.

Mole Chicken Enchiladas. Chicken Enchiladas con Mole Poblano is probably the most common way that mole sauce is used in Mexican restaurants in the U.S. One of the reasons mole may seem daunting to many cooks is the look list of ingredients, but this recipe from Robb Walsh's The Tex-Mex Cookbook pares the ingredient list down to the basics.

Pressure Cooker Mole Chicken Chili. Don't have all afternoon to simmer something in a rich mole sauce? Use a pressure cooker to speed up cooking time. This recipe, adapted from America's Test Kitchen's Pressure Cooker Perfection, is done in an hour and change.

Mole Brined Roasted Turkey Breast. Departing from the traditional mole "sauce," here I've used the flavors of mole in a brine to infuse turkey breast for a flavorful Thanksgiving entree.

Thanksgiving Mole Gravy. To go with that turkey? Naturally, you'll need mole gravy. This isn't mole sauce, but rather gravy with some mole sauce mixed in plus the drippings from the aforementioned turkey.

Sweet Potatoes with Mole and Queso Fresco. Because I apparently can't get enough of mole at Thanksgiving, I created this sweet potato dish for Thanksgiving last year, but you could easily serve this any time of year. Here, I went with a longer, more traditional list of ingredients for the delicious mole sauce, but it's really just a case of "a little it of this, a little bit of that." It's not complicated.

Mole Cookies. Yes, cookies. I created this for the 2014 Dallas Holiday Bakeoff with Dallas Decoder, representing Judith, the conniving whore-house-running matriarch of the Ewings' rival family the Rylands in the recent Dallas reboot. I got the idea for this realizing that many of the ingredients of mole work well in a dessert. Yes, they're a little bit spicy, but that's part of their allure.

Improved Tequila Cocktail. Now we're going to drink mole, or rather Xocolatl Mole Bitters, which was the first product created by the amazing bitters producers Bittermens. This drink is a nod to the late 19th Century "improved" cocktail but updated with tequila, which I don't believe was fashionable in the U.S. at the time.

Spicy Aztec Hot Chocolate with Mezcal. Another cocktail with mole bitters, this one is perfect for winter--a mezcal cocktail riff on Mexican hot chocolate. I didn't specify the mezcal at the time I posted this, but you can't go wrong with Del Maguey Vida mezcal in this recipe.