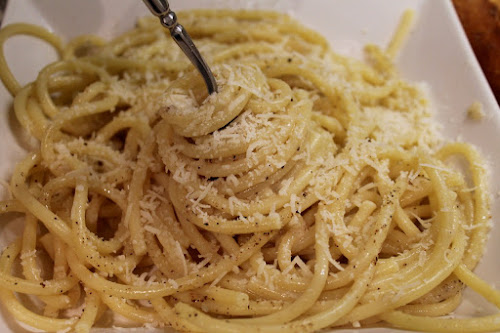 Is it just me or is "cacio e pepe," which is Italian for cheese and pepper, everywhere all of a sudden? While not a new dish, this simple combination of hard Italian cheeses--usually pecorino-romano but often also parmigiano-reggiano--combined with freshly ground pepper is really hot right now, popping up on recipe sites and restaurant menus. Mashable named it the "coolest pasta of 2016." 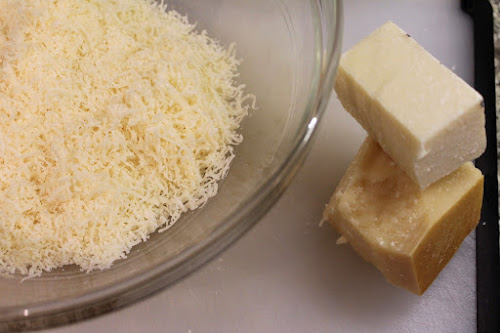 As simple as this dish sounds, there are some fundamentals to keep in mind to make it right. You're not just going to cook noodles and toss them with cheese, butter and pepper. There's a little more finesse involved. With cacio e pepe, you're actually making a cheese sauce, albeit a very simple one. 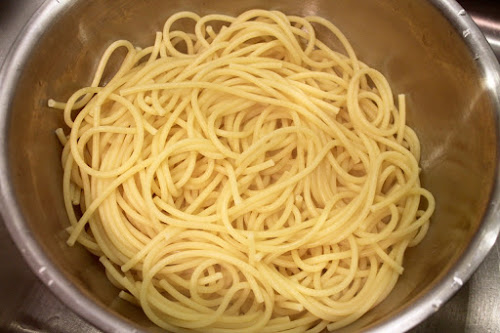 Although it's not listed in the ingredients for the recipe, the key ingredient in this dish is the pasta cooking water--hot (but no longer boiling) salty water saturated with starch sloughed off from the cooked pasta. In this dish, finely grated cheese is whisked into this hot water, which melts the cheese. The starch in the water acts as a stabilizing ingredient. According to Harold McGee in On Food and Cooking, starch coats the protein and fat components of the cheese and keeps them from coming back together. He also notes that when cheese are exposed to temperatures above their melting point, they tend to get clumpy. Since the melting point of pecorino and parmesan cheeses is about 180 F (and the boiling point of water is 212 F), you don't want to "cook" this sauce on a hot stove, but you also don't want that leftover pasta cooking water to sit around too long get cool, at which point it won't be warm enough to melt the cheese. That's what actually makes getting this dish just right a bit challenging--you want that sweet spot temperature that will make a the cheese melt into a smooth sauce. When I made it, I think my water may have been a bit too hot, as my sauce was a bit clumpy. This is the sort of dish that benefits from repeated experiences until you get it right. 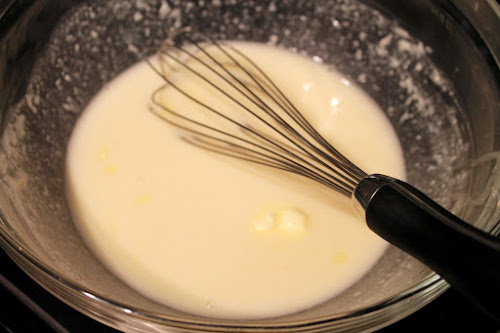 Whether you put other ingredients in cacio e pepe pasta is up to you. Some insist that it needs nothing other than pasta, cheese and pepper (some even insist that it only be made with pecorino romano and not also parmesan). On the other hand, America's Test Kitchen's recipe includes cream and olive oil. I added some butter to my sauce to increase its richness and because butter and pasta just go together so well. 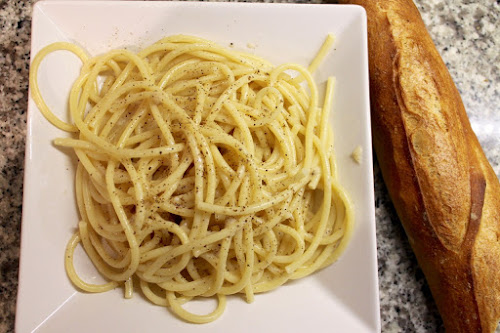 Note: I used a Microplane to finely grate the cheese. In addition to the ingredients below, you'll need to reserve about 1 1/2 cups of the hot pasta cooking water once the pasta is done cooking.

1. Place 2 oz. of the pecorino-romano and all of the parmigiano-reggiano cheese in a medium-size bowl.

2. Heat a large pot of salted water over high heat until boiling. Add the pasta and cook, according to package directions, until al dente. Working quickly, reserve 1 1/2 cups of the pasta cooking water, then drain the pasta in a colander and set aside in the large pot off the stove.

3. Slowly whisk 1 cup of the hot pasta cooking water into the medium-size bowl with the mixture of grated cheeses until they form a smooth sauce, then whisk in the butter and pepper. Pour the sauce over the pasta and stir to combine. Serve the pasta in shallow bowls topped with additional grated pecorino cheese and, if desired, more freshly ground pepper.
Posted by Cook In / Dine Out at 12:00 AM