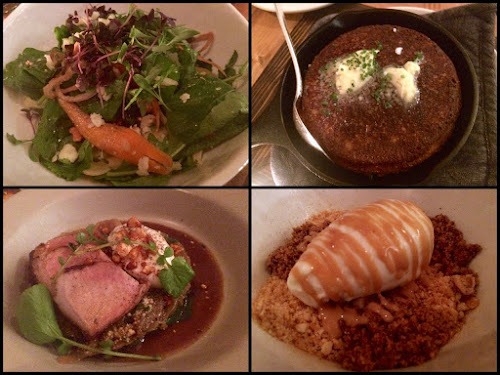 We're told that alleys are places to avoid. If you enter an alley in video game, expect to see the "game over" screen soon. Alleys are where you go to get robbed or stabbed.  In Batman Begins, Bruce Wayne's parents are gunned down in an alley. You might be surprised then if I suggested an alley is the perfect place to go for a delicious meal served in an inviting setting with friendly service.

I'm talking about The Dabney, which opened last year in the revitalized Blagden Alley in D.C.'s Shaw neighborhood just west of the convention center. Our recent dinner there was extraordinarily good. I'm still thinking about all the ways that Chef Jeremiah Langhorne, who recently worked in Charleston's under famed Southern chef Sean Brock's restaurant McCrady's, and has even worked at Noma (yes, that Noma), used fire, sorghum and locally sourced vegetables to craft a meal of memorable Southern-leaning dishes.

The open-concept kitchen is the focal point of the otherwise simply adorned dining room. The beautiful wooden tables are nicely spaced to allow easy movement through the restaurant. The lights are romantically low--but not so low you can't see the menu. Instead, let your eyes wander over to the kitchen where Langhorne and crew work around a massive wood-burning hearth, using its smoke, flame and embers to do the restaurant's cooking.

I can't wait to talk about the food, but first the cocktails. Bar Manager Tyler Hudgens, an alum of the Columbia Room, which recently relocated near The Dabney in Blagden Alley, has concocted a creative list of drinks that nicely complements the varied yet approachable flavors of the food. We're always up for a Manhattan, and loved the rye-based Homestead, its flavor pushed to a more pastoral place with house-made pecan-infused madeira. Also good was the pine-scented For Evergreen with old tom gin, maple and a wonderful pine liqueur, Zirbenz, which I must procure for my home bar.

The Dabney's menu isn't divided into starters and entrees, although it's fairly easy to tell by the way the dishes are ordered and their price points which ones will work best for designing those two courses. After a delightful opening of lightly charred focaccia bread with sorghum butter, we sprang for the arugula salad with carrots--the root vegetable comes in both charred and raw-shaved forms--enhanced with peanuts, herbs and a toasted benne (sort of like sesame seeds) dressing. It's a good reminder to me to use peanuts more in salad, for I love the crunch and flavor they provide. "Celery root baked in the embers," another winner, finds several roasted pieces of celeriac nestled atop a creamy oat risotto flecked with bacon, watercress and topped with a poached egg.

Perhaps we just devoured these starters too quickly, but at this point in the meal, there was a rather long pause before our order of cornbread arrived. For those accustomed to a sweeter cornbread, be prepared for this more savory Southern rendition, nicely browned by that wood-burning hearth. A meal here wouldn't be complete without this--be sure to save some for mopping up the sauces that come with your entrees. Also, if you can save a little of that sorghum butter, it would be really good on the cornbread too.

Both of our entrees were good, although the "Autumn olive pork in the style of bacon" was our clear favorite. Several succulent pieces of pork arrive atop a pile of caramelized onions cooked in whey and served with spring greens and maple cream. It was one of the best pork dishes I've ever had. Less impressive was the lacquered quail, which was tasty, but when you're sharing a quail dish--as all dishes at The Dabney are shared--it feels insubstantial, since the little birds yield just a couple bites of meat.

Sorghum returns for dessert in the sorghum custard, a decadent treat of brûléed custard topped with brown butter and peanut brittle crumbles, milk ice cream and a drizzle of peanut butter sauce. That's my kind of dessert, another highlight of the night. Along with the bad news (i.e., the bill), comes more good news: tasty little pecan-sorghum and ginger cookies.

Besides the food, I was also impressed with the service. Everyone was unfailingly friendly and polite from the hostess to our server and even the chef, who wished us a good night after we paused a bit to watch his team in action around the hearth before we departed.

I have no doubt that Chef Langhorne's name will be rolling off the tongues of D.C.-area restaurant aficionados in no time. In fact, the accolades for The Dabney are already rolling in. Zagat listed The Dabney among eight hard-to-get-into establishments along with Little Serow and Rose's Luxury (fortunately, unlike those establishments, The Dabney takes reservations).

If you're still apprehensive about wandering down an urban alley to find dinner, keep in mind that Diagon Alley is where you go to find all the best magic shops in the Harry Potter world. And in Blagden Alley, you'll find The Dabney brings a touch of magic to the real world.