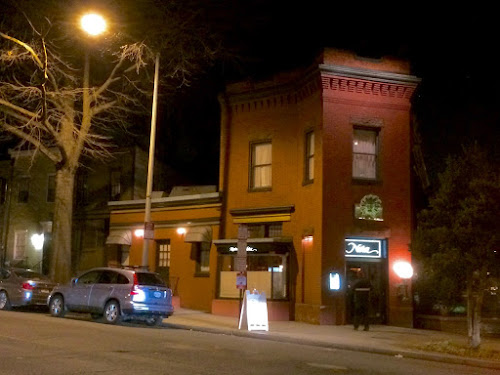 The D.C. restaurant scene today is crowded with chefs that many people--inside and outside the city--will recognize by name. People like Mike Isabella, Aaron Silverman, Marjorie Meek-Bradley (currently on Top Chef!) and, of course, José Andrés have elevated the profile of our local cuisine and let the masses know we've come a long away from the K Street steakhouse.

But before there were plans for galleria food courts, tapas derived from various international cuisines and 2-hour waits on 8th Street SE there was Nora Pouillon, an Austrian transplant to the U.S. She opened Restaurant Nora in 1979 with a focus on local, organic and seasonal ingredients. These are commonplace terms in restaurants today, but in 1979, they must have been a revelation. According to the restaurant's website, in 1999, Restaurant Nora become the first certified organic restaurant in the United States--even today, there are just a handful of such establishments.

Tucked away in a non-commercial corner of Dupont Circle a couple blocks off Connecticut Avenue, Nora's look is pleasantly simple and old school. Although surely the interior has been redone since 1979, the restaurant has a decidedly "retro" feel, as it lacks a lot of the design touches so common in new restaurants. I actually rather liked this, as I thought the simpler decor made for a cozier experience. And, as the son of a quilter, I enjoyed the wall quilts that comprise the primary decor throughout the restaurant.
I'm instantly smitten with Nora's cocktail menu, because it's actually just five variations of my favorite cocktail: the Manhattan. The Hell's Kitchen was my favorite, a perfectly balanced blend of bourbon, Lillet Blanc, sweet vermouth and black walnut bitters. Almost as good was the The Big Apple composed of bourbon, dry vermouth, amaretto and chocolate bitters. Generally I'm a stickler for Manhattan's being made the traditional way with rye whiskey instead of bourbon, but Nora's Manhattans were so good that I cannot possibly fault them for only offering the drink made with bourbon.
For my first course, I chose Hawaiian Hearts of Palm Salad with Pineapple Carpaccio (i.e. very thinly sliced), Ginger, Red Peppers and Citrus Sesame Vinaigrette. I chose this because I thought it was the most interesting salad on the menu and I liked it a lot. The hearts of palm were cut julienne instead of the typical round slices, which gave the salad a nice presentation. And cutting the pineapple very thin was smart, as it kept the pineapple flavor from overwhelming other ingredients in the salad. The other salad selections sounded good, but they are salads I've seen before, such as greens with gorgonzola, pear and pecan or Caesar.
Moving on to the main entree, I went with a braised short rib, which was tender and flavorful and accompanied by a typical but well-prepared assortment of vegetables. Again, the entrees aren't a place to find a lot of surprises, comprising a familiar mixture of meat and seafood choices such as grilled salmon, steak and roast chicken. The item that stands out as most unusual is a crispy tofu Tokyo hot pot--until you remember that Bouillon used to also oversee Restaurant Nora's sister establishment, Asia Nora, which closed in 2007.

We finished the night with a Fuji Apple Pie with Calvados Ice Cream. Calvados is French apple brandy, and I was intrigued by this, as I'd never seen an apple brandy ice cream. The ice cream turned out to be nothing special--it was sweet and creamy but not particularly flavorful. But the apple pie was incredibly good with its warm, nicely textured apple filling and perfectly flaky crust. It's probably the best apple pie I've ever eaten in a restaurant (and yes, I've had the Blue Duck Tavern apple pie, which I found to be overrated).

Overall, we enjoyed our dinner at Nora, certainly one of the most influential and long-lasting dining institutions in D.C. A word of caution though: be prepared for the bill. The prices, while not outrageous, were a bit higher than we expected for what we had. Presumably, that's the premium you pay for Pouillon's fastidious sourcing. The menu states that over 95 percent of its ingredients are supplied by "certified organic and biodynamic growers and producers." If that's very important to you, you probably don't mind paying for it. If it's not, you may wonder whether Nora's $30 to $42 entrees are really worth the organic surcharge. Still, I'm glad to have had the chance to sample the food at one of the pioneering establishments of D.C.'s increasingly well regarded restaurant scene.