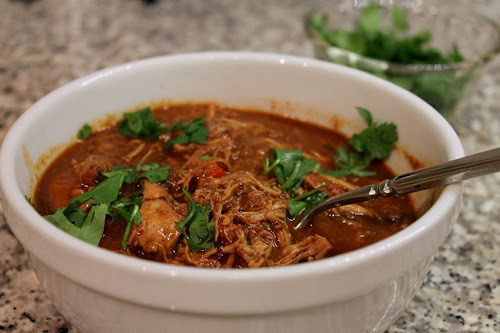 Soups and stews are among the easiest recipes to make in a pressure cooker. Start by sautéing the vegetables and perhaps browning the meats, add liquid and seasonings and bring to pressure. Pretty simple.

This Mole Chicken Chili recipe from America's Test Kitchen's cookbook Pressure Cooker Perfection appealed to me for several reasons: 1) I love chili (I shared a week's worth of chili recipes last October), 2) I've always wanted to make a mole recipe and 3) I get to use my pressure cooker to make  a good dinner in just over an hour.

This might not be a traditional mole, but the flavor is definitely there. The Test Kitchen's goal was to approximate the flavor of mole with pantry staples substituting for the lengthy list of ingredients in a traditional mole. That, combined with the simplicity of preparation, makes for a great recipe for pressure cooker novices.

This recipe calls for canned chipotles in adobo sauce. One can will contain a lot more chiles than you need for this recipe (they are very spicy). I like to divide the rest up until small ziplock bags and freeze them for use in other recipes.

A word of caution about this recipe: the sauce is very thick, so if you cook this at too hot a temperature while under pressure, it can stick and burn to the bottom of the pan (speaking from experience here). That's not to say it's not worth making--even if you have some burn-on mess to deal with. Just wanted to warn you.

1. Heat 2 tbsp. of oil in the pressure cooker pot over medium heat. Add chili powder, cocoa, garlic, chipotle, cinnamon and cloves and cook, stirring occasionally, until fragrant, about 30 seconds. Add the chicken broth, tomatoes, raisins and peanut butter and stir to combine with a wooden spoon, scraping any browned bits off the bottom of the pot. Simmer for 5 minutes. Puree mixture with an immersion blender until smooth, about 30 seconds (or alternatively transfer mixture to a blender and puree then return to the pot).

2. Meanwhile, heat the remaining tbsp. of oil in a medium frying pan over medium heat. Add onion and sauté until softened, about 5 minutes. Once the sauce has simmered, add the onion to the pot.

3. Add the chicken to the pot with the pureed sauce and onions. Lock the lid into place and bring to high pressure over medium-high heat. When the pot reaches high pressure, reduce heat to medium-low and cook for 25 minutes, adjusting heat as necessary to maintain high pressure.

4. Remove pot from heat and release pressure quickly using the quick-release valve (I wouldn't recommend the cold-water release for this recipe, since you need to continue cooking after releasing pressure). Once pressure is released, carefully remove the lid directing any remaining steam away from you. Transfer the chicken to a cutting board or bowl and shred meat. Meanwhile, bring the sauce in the pot to a simmer over medium heat. Add the red pepper and cook until tender, about 10 to 15 minutes. Add the chicken back to the pot and stir to combine. Serve in bowls topped with fresh cilantro.
Posted by Cook In / Dine Out at 12:00 AM