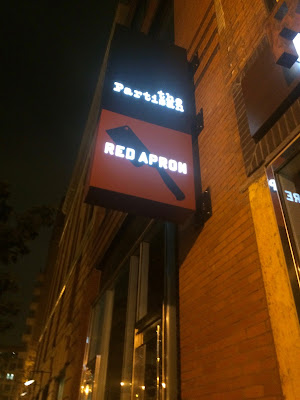 There's been a lot of talk lately about how restaurants are turning their attention more toward vegetables. Vegetables are displacing meat at the center of the dinner plate. Eleven Madison Park replaced beef with carrots in its tartare. Beefsteak, José Andrés restaurant empire's fast-casual expansion, doesn't have a lick of meat in sight.

With all these vegans and vegetarians running around--I count many among my friends and family--loving meat is becoming akin to a quiet embarrassment. Like admitting you still enjoy smoking or reality television. While I'm not into either of those things, and we have cut back on our meat consumption in recent years, I do still sometimes love a good meat dish. For those days, there's The Partisan.

You can fly your meat-loving flag high at this restaurant, an offshoot of Red Apron Butcher, a small local butcher shop and sandwich chain that has expanded from its first location in Union Market to Merrifield and Penn Quarter. It's a great place for lunch: I'm particularly fond of the Butcher's Salad with salami, greens, beans, olives, sundried tomatoes and grana cheese, and the Porkstrami, with its pastrami-style pork and bacon-braised sauerkraut, is a local legend among sandwiches.

A wall of sundries separates the Red Apron Butcher shop from The Partisan, the restaurant space that extends beyond a black curtain in a large rear bar. It's an attractive space decked out in dark wood, exposed brick and red leather. With all those hard surfaces, it's also quite noisy, so be prepared to lean in or raise your voice.


We started with a round of cocktails, both of which were excellent. I immediately fell in love with the  Maybe a Joyful Noise, an inventive cousin of the Manhattan made with Old Forester bourbon, Cocchi Barolo Chianti (an Italian digestif with quinine made from barolo wine), Bonal (a French aperitif, also with quinine) and orange and chocolate bitters. It's a wonderful complex, bitter-sweet drink, among the best cocktails I've had this year (in a year when I've had some pretty amazing cocktails). Chris went with the winning Career Opportunities, a mixture of wheat whiskey, Amaro Montenegro, Dolin Blanc and orange bitters. My initial thought that we'd switch to wine with the meal was axed in favor of another round of these great drinks.

The Partisan menu is divided into themes: snacks, pasta, vegetables, seafood, poultry and small game, beef and lamb, and pork. The meat sections are divided into small-, medium- and large-sized portions, which our server explains allows you to design a small-plates style dinner with lots of options or a family-style meal designed around larger anchors.


From the snacks selection, who chose the fried chicken skins served with chili powder, a wonderful idea that acknowledges what many of us have known for a long time: when it comes to fried chicken, the skin is the best part. Accompanying such a clearly sinful dish was something more wholesome: a delicious arugula salad with fresh figs, bacon and blue cheese. 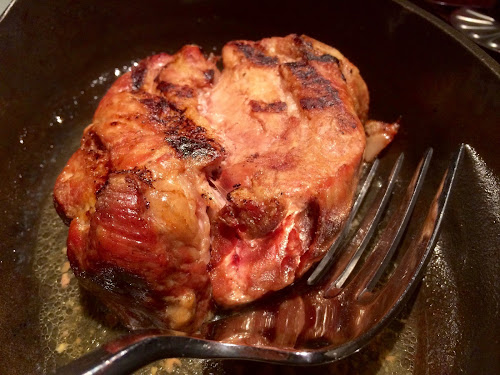 For our main course, we went the family-style route and ordered the slow-cooked pork shoulder. We chose wisely. The meat was tender and flavorful and, although it didn't need to side of pomegranate reduction, the sauce added a nice sweetness to the meat. The sweet potato puree was also tasty, although I think they may have forgotten the promised ancho chili powder, as we detected zero heat. The Brussels sprouts slaw dressed in mustard was also quite good. Thankfully, there's some buns for soaking up the wonderful juice pooled around the meat.


Although we were pretty sated at this point, it was a special occasion, so I didn't want to pass up dessert. We opted for the fried apple pie. On the one hand, this sounds like a unique dessert. On the other, we realized that's what McDonald's used to serve until they starting baking their pies (although I hear they may be bringing the fried version back). Needless to say, this is clearly superior to anything you can get at McDonald's. It doesn't hurt that it's served with candied pecans, whipped cream and salted caramel ice cream.

The Partisan excels at delivering the bold flavors you'd expect from a meat-focused restaurant. This isn't just a glorified butcher shop, but an honest-to-goodness real restaurant with a good menu and service. Despite its location in a particularly competitive neighborhood for good eating, The Partisan has distinguished itself as a worthy destination.