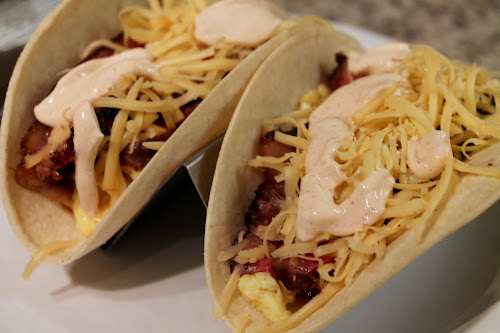 As I mentioned on Monday, one of the greatest discoveries of our recent long weekend in Austin was breakfast tacos. They combine breakfast-oriented foods like eggs, sausage and potatoes with typical taco fillings and garnishes. There are taco joints all over the city that served them. 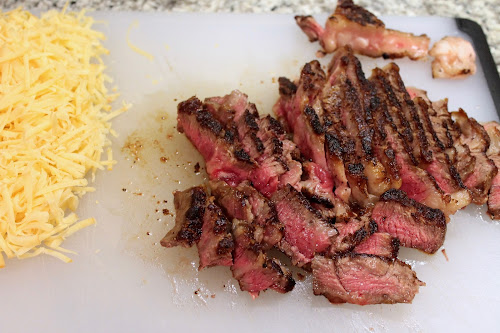 Our favorite breakfast tacos were from Taco Joint, a small taco restaurant just north of the University of Texas campus. I imagine a lot students make themselves regulars there, and who could blame them. The tacos are cheap, filling and delicious.

Our favorite combination there was the steak, egg and smoked gouda cheese taco, which I've attempted to recreate with this recipe. I garnished the tacos with some chipotle cream, which went beautifully with the gouda and steak. 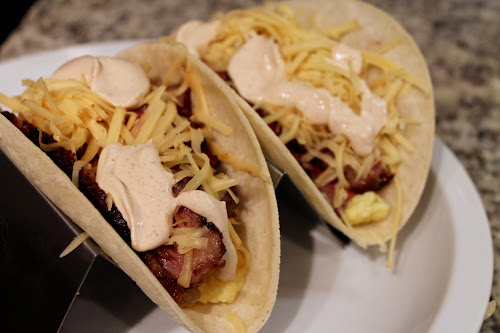 1. Heat oil in a sauté or grill pan over medium-high heat. Season steak with salt and pepper and add to hot pan. Sear the steak on both sides for 2 minutes each, then reduce heat to medium. Continue cooking steak, flipping every 2 minutes, until it is light pink in the middle, about 8 minutes total for a medium steak. Set aside on a cutting board to rest for 5 minutes, then slice against the grain into thin strips.

2. Heat 1 tbsp. butter in a medium nonstick frying pan over medium heat. Add the eggs and cook, stirring occasionally, as the egg forms small curds. Season with salt and pepper and, when cooked through, remove from the pan.

3. Add the sour cream to a small bowl and stir in hot sauce until it reaches a desired level of heat and taste.

4. To assemble tacos: place a double layer of corn tortillas on a plate or taco holder. Add a few slices of steak, a couple tablespoons of egg, a sprinkle of shredded cheese and a couple spoonfuls of chipotle sour cream. Serve immediately.