The way people feel about agave spirits--I'm talking about tequila and mezcal here--reminds me of an incredible Neil Leifer photograph we saw recently in the Soho Contemporary Art gallery. The one boxer is raising his arms in celebration of victory. The other's been knocked on his ass.

I know far too many people who have sworn off tequila due to bad memories of excessive low-quality tequila shots in their early 20s. They haven't tried or even heard of its smoky cousin, mezcal. They need an education. They need to visit Mayahuel.

Agave spirits aren't for everyone. And that's a shame, for I think cocktails made from tequila, mezcal and other Mexican spirits are incredibly good. Sure, margaritas are awesome, but everyone knows them. At Mayahuel you won't find a margarita on the menu, and that's a good thing, for this wonderful cocktail bar in New York's East Village is about all the other amazing things you can do with these spirits, especially mezcal, which is the foundation of most Mayahuel drinks.

I've made cocktails with Mayahuel recipes before and ever since hearing about the bar I've wanted to visit it. Last time we were in New York, we tried to stop in, but they were full. This time, I hatched a plan to show up right when they opened, hoping we could snag a couple stools at the bar. And it worked! We were among the first people in the door and had a front-row seat to watch Mayahuel's cocktail creators at work.

For our first round of drinks, I asked the bartender for recommendations of drinks he particularly liked with Mezcal. Chris ended up with The Division Bell, a wonderful welcome to Mayahuel's mezcal-forward menu. The drink is similar to the Naked and Famous at Death & Co., except that Mayahuel's drink uses Luxardo maraschino liqueur instead of yellow Chartreuse. It's a nicely balanced sipper: a little smoky, a little bitter, a little tart and just sweet enough. The recipe for this drink, which I found on Serious Eats, appears below.

My drink was the spicy Herb Albert and wow, what a way to start. I absolutely loved this cocktail. The jalapeño-infused blanco tequila definitely had a kick, but it wasn't too much to manage, balanced as it was just right with lime juice (and some agave too I think) to take the sting out. Mezcal gives the drink a smoky profile, while fresh oregano gives it a hint of herbal flavor.

We had dinner reservations elsewhere, so I'd only planned for us to have one drink. But the first round was so good and there were so many more interesting options, so onto...

Here's where it gets really interesting. A couple days prior, I had enjoyed my first taste of sotol at the Flatiron Wine & Sprits shop. Never heard of sotol? It's another Mexican spirit, although made with a plant called the "desert spoon" instead of agave (My Poor Liver did an excellent podcast on it recently). I'd never seen sotol on a cocktail menu, so I asked the bartender if they were working with it. Of course, they were, and he made this incredibly good drink for me.

The Dijahbone was really something special, a blend of sotol, duck fat infused Grand Marnier, carrot juice, lime juice and cumin. Although this was not a drink he'd created, he knew that his coworker who'd invented it used the duck fat and carrot juice to underscore the savory and earthy notes of the sotol. The drink was a real knockout. Anyone interested in sampling the potential for sotol in cocktails should try this.

Chris had the Ready to Depart, a refreshing and delightfully summer drink made with reposado tequila, sherry, orgeat, lemon, mole bitters and banana liqueur. The bartender built the drink in the glass with crushed ice and swizzled the drink (with a real swizzle stick). None of the modifiers were overwhelming, even the banana liquor.

In many ways, Mayahuel reminds me of our recent trip to Death & Co.--the dark, intimate setting, the delicious and well-crafted drinks and the attentive service--but with a focus on Mexican spirits. Perhaps its no surprise that Mayahuel's head talent, Phil Ward, used to work at Death & Co., where he originated one of that bar's most popular drinks, the Oaxaca Old Fashioned.

Mayahuel also offers a selection of food, mostly snacks and small plates, but as we were (finally) headed off to dinner, we had to pass this time. We emerged feeling high on the amazing drinks we'd just enjoyed. Definitely more Ali than Williams. 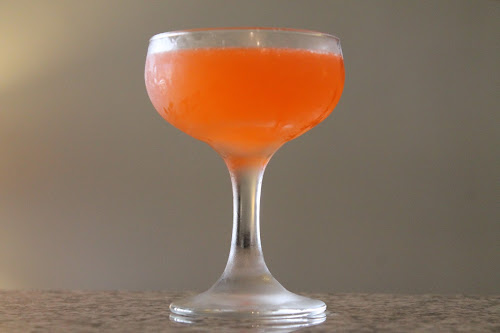 Cocktail: The Division Bell
I found the recipe for one of the drinks we enjoyed on Serious Eats, which I adapted below from Phil Ward's recipe for Mayahuel

Combine ingredients in a cocktail shaker with ice. Shake until cold and strain into a chilled cocktail glass. Twist a piece of grapefruit peel over the glass, rub the peel around the glass's rim and then discard the peel.