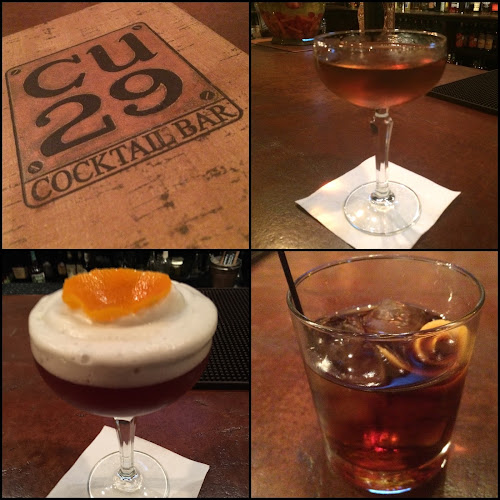 The other week, Chris and I spent a long weekend in Austin. Next week, I'll fill you in on our adventures in barbecue, Tex-Mex and, a real find, breakfast tacos (clearly we ate well). But this week, I want to focus on the great cocktail bars we visited. Cool cocktails bars have been a particular focus of ours this year (see Death & Co, Mayahuel and 2 Birds 1 Stone, for example), and Austin did not disappoint. We steered clear of the 6th Street party scene to discover three fun and exciting cocktail bars working their magic with a focus on good service and quality ingredients.

It's rather unfortunate that cool cocktail bars are hard to find. They're doing the whole speakeasy thing, which is fine. I honestly don't have the patience for too much of that (no passwords please). So it's nice to find a cool cocktail bar that does it the old-fashioned way: it's on the street with a sign. How novel!

CU29 (pictured above) may present a traditional front, but there's nothing ordinary about this spectacular downtown cocktail bar that's just a short walk from the Texas state capitol. The roomy space has a long meandering bar fronting a rather impressive stock of bottles. Although the name may sound like it's meant for people in their 30s, it actually refers to the elemental name of copper, which the pots around the bar are made of.

The menu is filled with original creations. The night we visited, we saw a particular bent toward bitter-and-sweet Italian amari mixed with whiskey and agave spirits. How perfect! I enjoyed the El Dueño, a smoky-sweet concoction of mezcal, Averna amaro and green chartreuse. Even better was the Friendly Stranger, a sort of fancy take on the Manhattan made with bourbon, Cherry Heering, Grand Marnier and walnut bitters topped with egg white foam and a orange peel flamed with a bit of green chartreuse. It was an elaborate and delicious drink.

But best of all was the Elijah's Railcar, another Manhattan-like drink but very different from the Friendly Stranger. I tried to approximate what we had on Monday, and although I think I came close, it wasn't quite as magical as I remember it in the bar. With a base of James E. Pepper 1776 rye whiskey, the drink also contains Meletti--another amaro--chocolate bitters, honey liqueur and a topping of freshly grated cinnamon. Wonderfully aromatic and well-balanced, it was the best cocktail we had during our time in Austin, and one of the best we've had this year.

We liked the bar so much we went back a second night, during which the bartender made us off-menu cocktails based on whatever we told him we were interested in. He hit the mark with each one. It's nice to find a place where the bartenders are as greatly skilled as they are friendly. Combine that with the classic atmosphere and the occasional live music, and CU29 is a real winner. 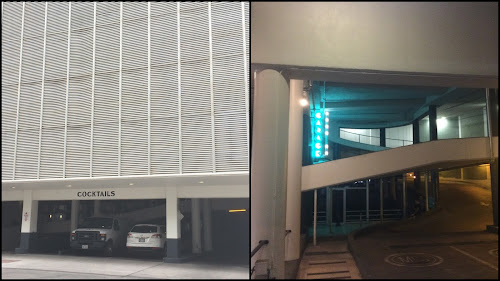 Park Yourself at This Bar

On our first full day wondering around Austin, we passed a nondescript down parking garage with "cocktails" written above one of the garage entrances. How odd, I thought, and chalked it up to Austin's quirky side.

Turns out, there is actually a cocktail bar in that parking garage, a rather cool one. The appropriately named Garage is built into a surprisingly roomy space near the entrance to the garage. The swanky minimalist interior has a round bar at the center with small tables along the lounge's concrete walls. 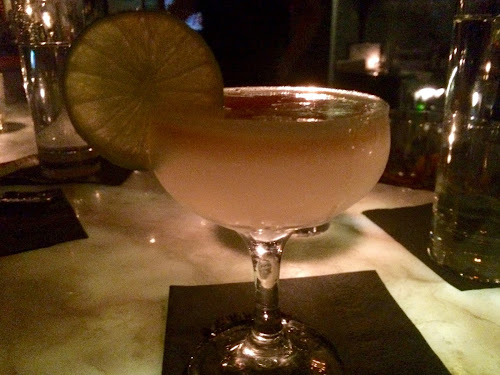 The drinks here were also very good. Cheers to bar manager Chauncy James for designing such an inventive menu. Some of our favorites were the Someday Baby, made with tequila, mezcal, honey chamomile and lemon, and the Psychedelic Fir, which combines gin, malic acid (sounds strange, but it adds sour flavor), lime and ClearCreek's Eau de Vie of Douglas Fir, a product I have in my bar but haven't been sure what I should do with it. 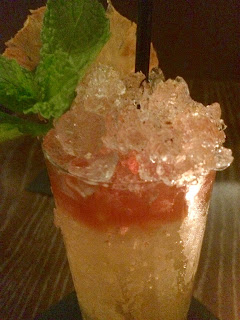 Amazingly, the bar hidden in the parking garage wasn't the hardest to find among these three. It was this one--a narrow bar space that connects two restaurants along Congress Avenue. We searched and searched for the entrance to Bar Congress before realizing that you must go through either Restaurant Congress or the Second Bar + Kitchen to get to the bar.

Bar manager Jason Stevens designed the menu with classics in mind. Most of the drinks date back to the late 19th or early 20th centuries. Chris had the Tequila Daisy, a 1930s-era tequila cocktail with Marolo Chamomile Grappa, honey wine and citrus. I chose the Queen's Park Swizzle (pictured at right), a refreshing blend of rums, lime, mint, bitters and sugar. So if you're in the mood for something old-fashioned, this is definitely the spot.

Austin isn't Texas's largest city, but I don't think it's an exaggeration to say it's become the state's best-known destination for good food. With great cocktail bars like this, I wouldn't be surprised to learn it's the state's best drinking destination as well.