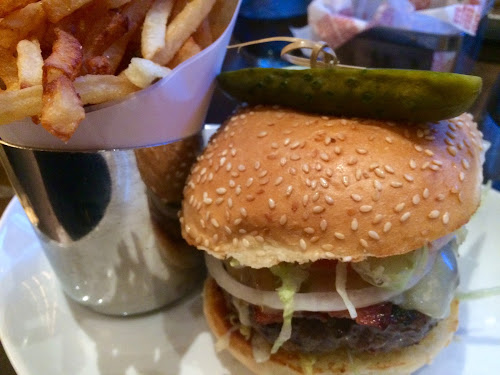 It's not uncommon these days for a business's name to be an apparent acronym that doesn't actually stand for anything. In some cases, it once did, but not anymore. These are "pseudo-acronyms"--a string of letters that once stood for words but have been redefined to sever the acronym from its original meaning. For example, the former American Association of Retired Persons just goes by "AARP" now, probably because as people are working later in life, many of its members aren't actually retired. Similarly, "AT&T" was once the American Telephone and Telegraph Company, but the telegraph is no more and even the telephone has evolved far from what it once was.

Similarly, "DBGB," Chef Daniel Boulud's return to the D.C. market, doesn't apparently stand for anything. When the original DBGB opened in New York in 2007, it was widely reported that DBGB stood for "Daniel Boulud Good Burger," but that name is nowhere to be found in the restaurant's marketing or website. It's apparently a nod to CBGB, the famed music venue that was located in the same neighborhood as the New York DBGB and that closed about a year before that restaurant's opening.

When DBGB opened in D.C. last year, I was definitely curious. Daniel Boulud is one of the country's best-known chefs, famous for his restaurant Daniel and a slate of other more casual eateries, including New York's DB Bistro Moderne, home of the famed (but, to us, disappointing) Original DB Burger. That burger's striking feature is its massive patty, a meat-lover's dream of sirloin stuffed with braised short ribs, foie gras and black truffles. Despite all those ingredients, we found it to be surprisingly lacking in flavor. It was a lesson that, when it comes to burgers, we prefer something traditional.

That's exactly what I was hoping to get at DBGB. Whether "good burger" is actually part of the name or not, burgers stand out on the menu, a mix of French and American influences: coq au vin sits next to fried chicken, for example. There's also a selection of sausage options.

As for the burgers, there are two choices: The Frenchie, a beef patty with pork belly, arugula tomato-onion compote, morbier cheese on a potato bun, and The Yankee, a more traditional offering of beef patty with Vidalia onion, iceberg lettuce and tomato served on a sesame bun with a pickle. While The Frenchie sounds interesting, I stuck to my plan and ordered the Yankee. Although our favorite D.C. burger remains the grilled burger with cheese at Buck's Fishing and Camping, this burger was quite good and certainly better than the "fancy" one we ate at DB Bistro Moderne. The patty was flavorful and cooked just right. Plus, I appreciate that they served it on a traditional hamburger bun. I'm really getting tired of things like brioche used as burger buns. The fries that accompanied the burger were decent, although they weren't uniformly crispy (they were better the day I stopped in for lunch--more on that below).

One of the best parts of our dinner at DBGB was the cocktail. It was a very good mixture of rye whiskey, apple brandy, rum, sugar and tiki bitters called the "Colonial" for its mixture of "new world" ingredients. Chris, in particular, loved this drink. Cheers to head bartender Eric Jeffus. 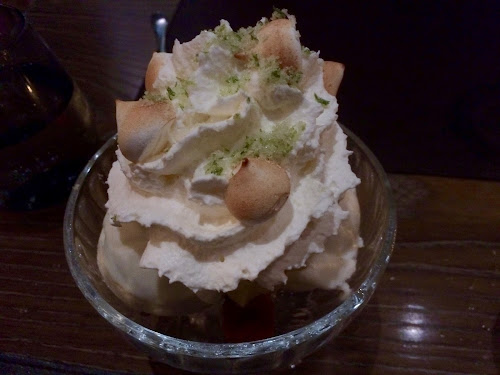 We also enjoyed our salad, an interesting mix of grilled kale, black figs and oyster mushrooms with a buttermilk dressing. We particularly liked the salad's pickled chestnuts and the grilled kale was interesting. These are unusual ingredients to bring together in a salad but they work. 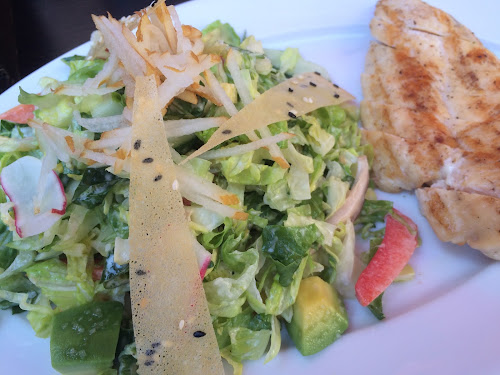 It wasn't the first salad I'd had at DBGB. About a month before our dinner, I stopped in for lunch and enjoyed the chop-chop salad with grilled chicken. The salad is a refreshing blend of romaine lettuce, avocado, asian pear and radishes mixed with just the right amount of a zipping ginger-sesame dressing. We also couldn't resist getting a side of fries, which went perfectly with the salad (well, fries could probably go perfectly with just about anything).

As for what "DBGB" actually stands for? I tried to find out, but was unsuccessful. My multiple inquiries to the restaurant's media relations team were never answered. I was also hoping to get more information from them about the restaurant's striking architectural design. Perhaps they have been on vacation. We had a much better response from the staff in the restaurant, who were friendly and struck that wonderful balance of being attentive and available but not "in your face."

If the name remains a mystery, what isn't mysterious is the result: a decent place for lunch or dinner in the emergent D.C. City Center development.