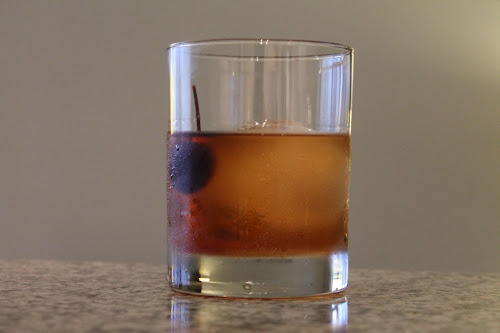 Everyone's heard of the Manhattan. It's one of the most famous cocktails. But the other four boroughs of New York City also have cocktails named after them.

The best of those is the Brooklyn, which is fairly similar to the Manhattan: they both have rye whiskey, vermouth and bitters; however, the Brooklyn is made with dry vermouth with its sweetness coming from a touch of maraschino liqueur. It's a nice drink and it's no newbie: the recipe in the PDT Cocktail Book dates back to 1910.

The bitters are a bit tricky. Traditionally, the drink is made with Amer Picon, but good luck finding that. I've read all sorts of suggestions for what you can substitute for it, but I think the easiest thing is to just use a few squirts of Angostura bitters (Leave it to Brooklyn to include in its namesake cocktail an ingredient no one can find).

Since I like my Manhattans up, it seems right to serve the Brooklyn on the rocks, or perhaps with one big round rock like I've done here.

Combine whiskey, vermouth, liqueur and bitters in a cocktail mixing glass with ice. Stir until very cold, at least 30 seconds. Strain into a chilled coup and garnish with a cherry, if desired.
Posted by Cook In / Dine Out at 12:02 AM