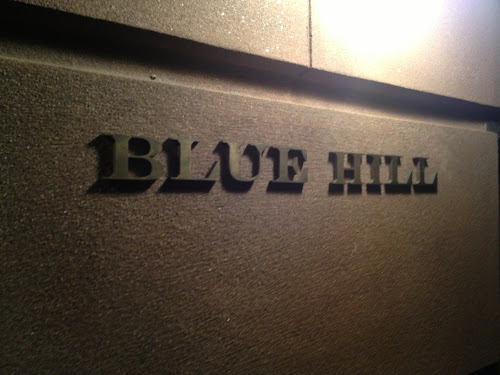 A visit to a restaurant like Blue Hill is a special treat. It's not everyday we get to visit the restaurant that just won the James Beard award for Outstanding Restaurant. In fact, I'm pretty sure this was a first.

The restaurant, and its chef, Dan Barber (winner of the 2009 James Beard Award for Best Chef), have come to epitomize the farm-to-fork ethos that has swept restaurants across the nation. Blue Hill and its sister restaurant Blue Hill at Stone Barns in Tarrytown, N.Y., operate in conjunction with Blue Hill Farm in Massachusetts, which has been in the Barber family for three generations. The Blue Hill website makes this connection obvious: the farm is featured as prominently as the food. It is a principal supplier of the restaurant's fresh vegetables and meat.

At Blue Hill, freshness isn't just a selling-point. You can taste it in every bite. And given the current season, peas were the chef's note of choice, coaxed into an amazing and varied symphony of flavors. These were among the most glorious sugar snap and green pea dishes I've ever had. The beginning amuse was a mini pea and ricotta burger with an almond flour bun. The one-bite treat had a bit of crunch and nice sweetness.


Presentation is thoughtful at Blue Hill, but not overdone. The chilled pea soup begins as a small pile of fresh peas and bacon over which the server pours cold pea broth. The broth is thin but flavorful, and the bacon adds intense flavor, despite there being very little of it in the soup.

Sugar snap peas are cooked just enough to make them tender, served in a pile with roasted hazelnuts and a tangy vinaigrette. Although the menu stated the dish contained pickled ramps, I'm pretty sure the night we visited it featured picked cauliflower instead, which is fine by me, since both would be delicious in this dish. The crispy fresh peas were the star, while the slightly bitter roasted nuts and sour pickles were the fine supporting cast in this opening act.

We had varying reactions to our entrees. I was quite happy with my pig dish prepared three ways: roasted pork loin, a strip of chop and a piece of luscious pork belly with crispy skin. Each preparation was unique, delicious and well-seasoned but not too salty. Accompanying the porky trio was the now-familiar sugar snap peas, more cooked this time, along with some fava beans and almonds.

Chris was not as happy with his chicken, which came as a rather meager portion. If you're thinking of the generous Palena or NoMad roast chicken, put that image out of your mind. At Blue Hill the presentation is more subtle: just a few slices of herbed breast and a small (but incredibly tasty) piece of dark meat. A few pieces of summer squash and a pile of ricotta cheese mixed with chopped basil adorn the simple plate.

Dessert was a relatively simple preparation of cooked blueberries with toasted almond cake and buttermilk sorbet. Again, be prepared for a small portion: you get about a dozen berries with three pieces of cake and a teaspoon-size quenelle of sorbet. It was all very delicious though, especially the sorbet. Chocolate truffles and citrus-dusted marshmallows arrive as one last treat before the check.

The service here was very good, as you would expect. Dishes were well-timed and our server was friendly and quite knowledgeable about the by-the-glass wine selections.

Our overall feeling upon leaving the restaurant was more like "huh, that was really interesting" than "wow, that was really good." From what I've read about Blue Hill, the restaurant is aiming for subtlety and nuance rather than dishes that bowl you over. Like a complex novel, it's the sort of thing you enjoy at the time but appreciate more as you reflect upon it later. It's certainly inspirational. My head is already buzzing with ideas for sugar snap peas. Here's to hoping I can make them sing at least half as sweetly as they did in Barber's lovely symphony.