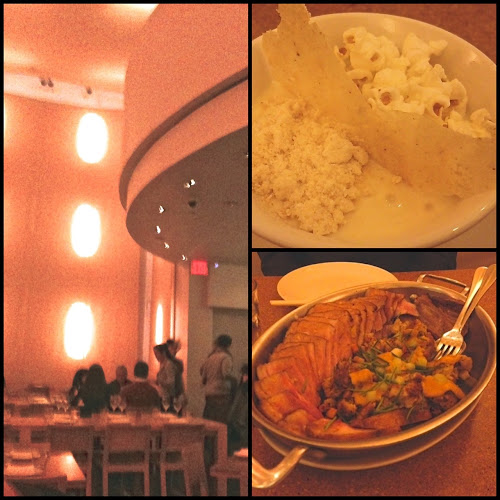 But I hadn’t yet had the pleasure of actually dining in one of the restaurants. I have a coworker who raves about Noodle Bar. Another who dazzled me with stories of dinner at Ssam Bar. Feeling left out, it was time I rectified the situation.

So I selected Ma Peche, which is sort of the secret Momofuku restaurant. It doesn’t have “Momofuku” in the name. It’s underground, hidden behind and below a Momofuku Milk Bar store front. Last summer, when I went in to buy some cookies, I figured the space in the back was where you could go eat your Crack Pie if you wanted to sit for a bit. I had no idea it was a separate restaurant.

I wasn’t disappointed. On a trip that included hot spots The Nomad and The Library at the Public, our favorite meal was what we had at Ma Peche.

After a rather harried walk up a ridiculously crowded 6th Avenue, we were more than ready for some drinks. I had the Bruno, made with Nolet, Cynar and Punt e Mes, which I selected mostly because I didn’t know what two of those three things were (Nolet is a type of gin; Punt e Mes is Italian vermouth). Chris was particularly happy with his drink, the Drunken Pun’kin, a warm pumpkin cocktail with dark rum and walnut liqueur.

Moving on to starters, we selected a couple that promised fresh flavors. An apple salad served with celery shavings, date slivers, chopped peanuts and peanut sauce hit the spot. But the broccoli salad was even more intriguing, served with mayonnaise and smoked raisins, one of the more unusual smoked ingredients I’ve had.

The highlight was the pork chop for two with stuffing, which rivals the roasted pork dinner for two at Mintwood Place. I’d heard Ma Peche’s portions could be small, but there’s nothing small about this massive pork chop. You could probably split this three ways and still be quite sated. The bread and celery stuffing is really quite good too, but what brings it all together is the drizzle of sweet potato puree. Such a simple thing, but it’s such a great idea with stuffing and pork.

Ma Peche didn’t used to serve dessert, but now there are a few options. White chocolate with popcorn and caramel may not sound like an exciting dessert, but it was really quite tasty with just the right amount of salt to heighten the sweet.