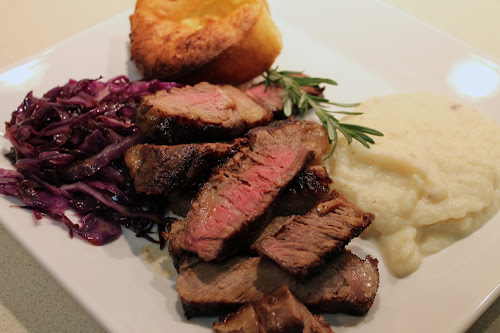 After focusing so much on the food sections of the Washington Post and New York Times last year, I’ve been branching out and reading the food content of other newspapers. Although I knew papers for cities like Boston and San Francisco had food sections, I was surprised to learn the Wall Street Journal also has food coverage. 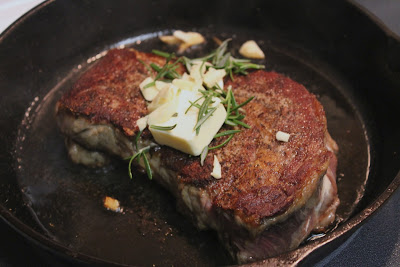 This recipe ran at the end of last month as part of the series “Slow Food Fast,” the idea being how to make good fast version of dishes that often take quite a long time. Gramercy Tavern Chef Michael Anthony contributed this delicious meal of pan-seared steak with celery root purée, sautéed cabbage and popovers. I made this for New Year’s Eve and it was perfect. 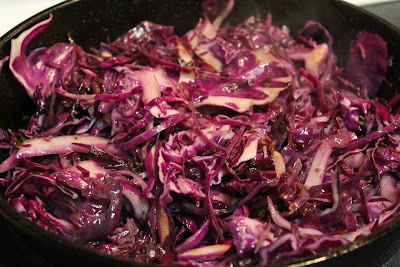 I made a few changes from the original recipe. I substituted ribeye steak for the sirloin, since I like the flavor better and we hardly ever have steak at home. Since I was cooking for two, I scaled the meat portion down to 1 lb., which was one steak, and used a smaller 10-inch cast iron pan instead of a 12-inch size. Be sure to use a big enough pan to not crowd the meat. 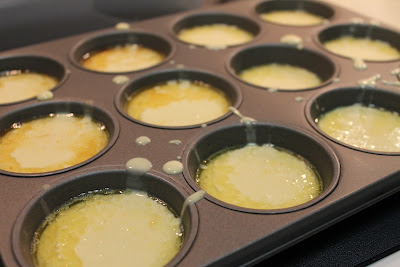 When it comes to recipe time estimates, they are almost always wrong, and this recipe was no exception. It claims to take 40 minutes. Ha! Maybe if you’re bionic. It took me close to 90 and I was working pretty constantly during that time. (For this reason, I don’t usually provide an overall time estimate for my recipes. It can vary so much depending on your personal kitchen working style, particularly food prep skills and ability to multitask. I recommend always reading through a recipe and thinking through on your own how long each task will take.) 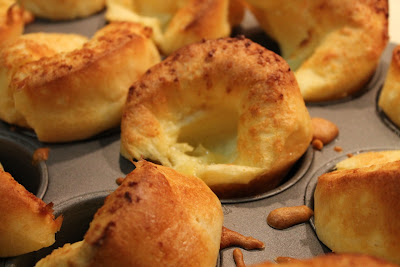 1. Preheat oven to 425 degrees. Heat 2 cups of milk in a saucepan over medium-high heat until it boils and simmer until reduced by two-thirds (yielding about 2/3 cup), about 20 minutes.

2. Make the popovers: whisk together the flour, ¾ tsp. salt and 1 ½ cups milk. Beat in eggs and 1 ½ tbsp. melted butter. Add ½ tsp. butter to each cup of a 12-cup muffin tin (2 tbsp. butter total). Heat tin for 2 minutes in the oven. Remove and swirl to coat cups with melted butter, then fill each cup with batter, about a half to 2/3 full (do not overfill). Bake in oven until puffy and golden, about 15-20 minutes (note: the popovers will “fall” soon after coming out of the oven, so I’d advise not putting them in the oven until you’re making the steak).

3. Make celery root purée: Heat a 4 qt. saucepan over medium heat (recommend using one that isn’t nonstick). Add ½ tbsp. butter and sauté celery, shallots and 3 garlic cloves until the vegetables soften, but are not brown, about 3-5 minutes. Add 2 ½ cups of milk, increase heat to medium-high and bring to a boil. Reduce heat and simmer until tender, about 20 minutes. Strain vegetables, reserving the cooking liquid. Puree in the saucepan with an immersion blender, adding enough of the reduced milk (from step 1 above) to give the purée a smooth consistency. Use additional reserved cooking liquid if needed. Season with salt and pepper.

4. Make steaks: Pat steaks dry and season with salt and pepper. Add canola oil to a large skillet (I used cast iron) over medium-high heat. Once the oil begins to smoke, carefully lay in steaks. Brown both sides, about 2 minutes per side, and then lower heat to just below medium to maintain a steady sizzle. Add 1 tbsp. butter, 2 cloves garlic and the herb sprig. Continue to cook while basting steaks with butter, garlic and herbs until medium-rare, 3-4 minutes more. Discard herbs and garlic (but not the butter) and let meat rest 10 minutes before slicing.

5. While the steak rests, make the cabbage: Set steak pan back over medium-high heat. Once hot, add cabbage and cumin and caraway seeds. Season with salt and cook until slightly wilted, about 3-5 minutes. Remove from heat.

6. Serve steak sliced with celery root purée, cooked cabbage and popovers on the side.
Posted by Cook In / Dine Out at 12:00 AM