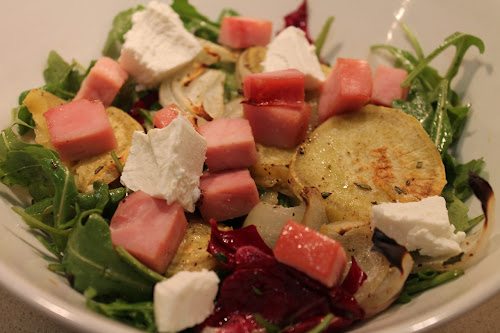 A coworker recently gave me a copy of CookFresh, a seasonal publication gathering the best of Fine Cooking. It’s a publication I’m not familiar with, but judging from its delicious-looking recipes, I probably should be.

This issue focuses on healthy cooking with winter vegetables, which was just what I was looking for, since I wanted another seasonal salad for this week. The Sweet Potato, Ham and Goat Cheese Salad that graces the cover looked particularly appealing. 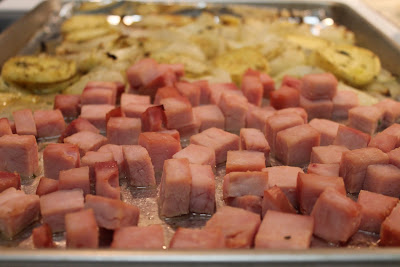 I ended up using light sweet potatoes instead of the orange kind, since they looked better in the produce bin. I also used arugula and radicchio instead of mesclun for the greens. The maple-glazed ham is a particularly nice touch in this dish.

1. Position rack in the center of the oven and preheat to 450 F. Line a rimmed baking sheet with foil. On the baking sheet, toss the onion, sweet potato, 2 tbsp. of oil, 1 tsp. of rosemary, 1/2 tsp. salt and 1/4 tsp. pepper and spread in a single layer. Roast until the vegetables start to become tender, about 15 minutes.

2. In a small bowl, toss the ham with the maple syrup. Push the vegetables on the baking sheet aside to make room for the ham and bake until the ham and onions are browned in places, about 10-15 minutes.

4. Divide the dressed greens among 4 plates. Top with the roasted vegetables and ham. Sprinkle each salad with some of the goat cheese. Drizzle with the remaining vinaigrette and serve.
Posted by Cook In / Dine Out at 12:00 AM