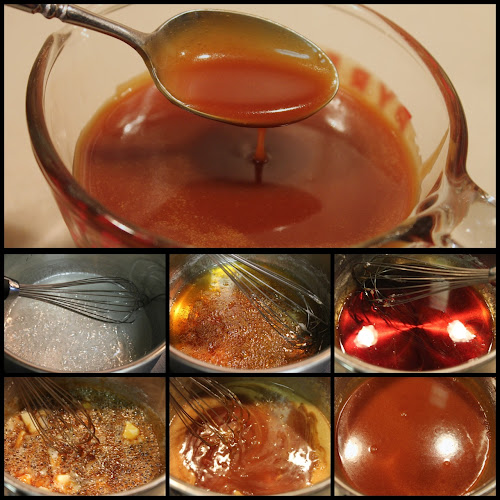 Usually when you burn something in the kitchen, it means you’re in trouble. But there are a few foods for which a controlled burn, that is a burn that doesn’t go too far, is exactly what you want. When you burn sugar for too long you get something rather nasty, but if you burn it just right you get caramel, one of the most delectable sweet treats.


Bon Appétit’s January 2013 issue ran a fairly traditional recipe for salted caramel sauce (to accompany almond bread pudding) with one twist: a bit of cream of tartar to discourage sugar crystallization on the side of the saucepan. Although I did still get a little crystallization with this recipe, it wasn’t as much as I’ve experienced before and since cream of tartar is basically tasteless, it does no damage to the rich, burnt sugar taste you’re looking for.


The most important step in making caramel sauce is the caramelization process. This recipe boils the sugar-water mixture on medium-high heat until you get a honey colored syrup and then reduces the heat to provide better control while cooking to that desired deep amber stage.


This part can be a bit tedious. A watched pot never boils and a watched sugar-water mixture never caramelizes, or so it seems. But turn away at your folly: once it starts to brown it can go over to the dark side real fast. You’re looking for an Obi-Wan Kenobi, not a Darth Vader. Let this syrup get pretty amber, almost reddish looking, which was just right. For another visual take on this process, I recommend the Bon Appétit video.


Also important is using the right pan. Since the mixture will sputter when the butter and cream are added, I recommend using a 4 qt. saucepan, since its tall sides help contain the mixture and reduce the chance you’ll burn yourself with a little splatter. If that concerns you, wear gloves while adding the dairy ingredients. I also recommend using a stainless steel pan rather than nonstick, since it’s easier to see the color changes in the sauce if the pan isn’t black. 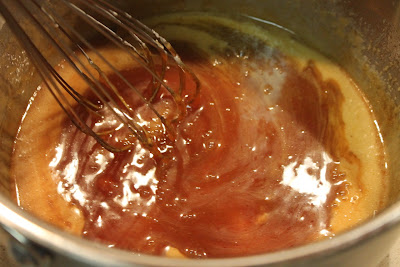 The finished sauce should be cooled a bit and then stored in the fridge up to 2 weeks. I like to keep it in a covered glass measuring cup, since that makes it easy to warm it a bit in the microwave and pour it over ice cream, cake or other desserts. 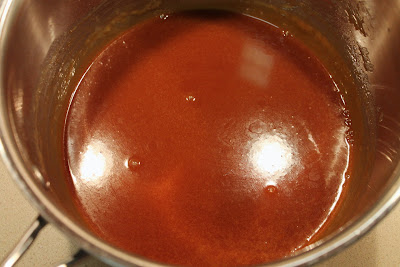 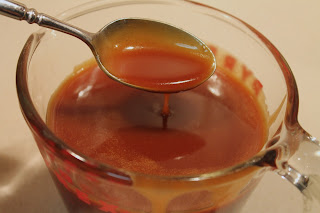 1. In a 4 qt. saucepan, whisk together sugar, cream of tartar and water and bring to a boil over medium-high heat. Stir it a bit to make sure the sugar dissolves evenly, but then let it cook unstirred until it starts to brown, about 5-6 minutes. Continue cooking, stirring a bit, until it reaches the color of honey. Reduce heat to medium-low and continue cooking, stirring occasionally, until the mixture is a deep amber color, about another 3-4 minutes (the times really don’t matter in this recipe and they may vary depending on your range—it’s the color stages that are important).

2. Remove saucepan from heat. Whisk in the butter (carefully, since it will sputter), then the cream (again, be careful) and then finally the salt. Allow the sauce to cool a bit and then transfer to an appropriate container: a glass jar, bowl or measuring cup (don’t use plastic if the mixture is still hot). Store in the fridge for up to 2 weeks.
Posted by Cook In / Dine Out at 12:00 AM