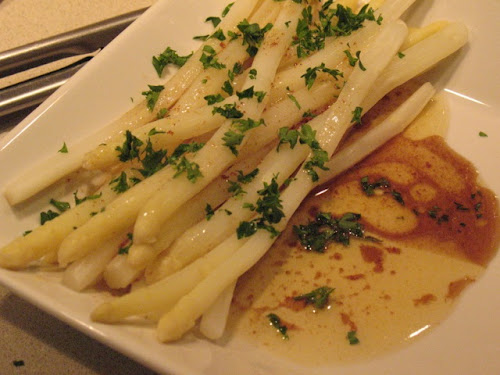 For years I've wondered about but never tasted white asparagus. Those ghostly sprigs show up in the grocery store around this time of year, looking like zombie versions of the more common green type. 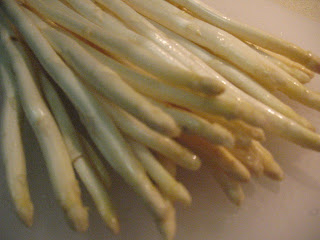 White asparagus is white because it's grown underground, preventing sunlight from reaching the stalks and thus inhibiting chlorophyll production.

Although green asparagus has woody parts, the outer part of white asparagus is even tougher and must be peeled off before preparing (the snap method does not work for white asparagus). Nonetheless, the stalks themselves are more tender, so this must be done carefully. The recommended method is to lie the stalks flat on a cutting board and run a vegetable peeler over them, starting about an inch below the tip. Even doing this, I broke a few, so be careful.

I tasted a small piece of the raw, peeled white asparagus. The flavor reminded me of bean sprouts, which I suppose makes sense, given that they too grow underground. Cooked, the stalks have a more delicate, less bitter flavor than their green counterpart. 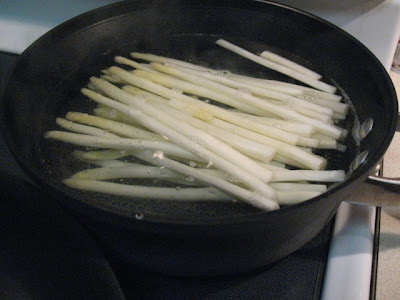 I like this recipe from Gastronomer's Guide, which uses a simple preparation paired with brown butter and fresh parsley.

2. Fill a deep-sided skillet or large saucepan (large enough that the stalks can lie flat when placed in the pan) about halfway (2 inches) with water. Add salt (a tablespoon or so should do it) and asparagus spears. Bring to boil over medium-high heat. Cook for 5 minutes.

3. Heat a small saucepan over medium heat (a stainless steel pan will work better than a nonstick pan, since it's lighter surface will allow you to better observe the browning of the butter). Add butter and cook until butter has browned, swirling occasionally to better ensure even heating, about 5 minutes. Pour butter into a glass measuring cup and whisk together with lemon juice and vinegar.

4. Place asparagus on a plate, spoon brown butter sauce over spears and sprinkle with parsley.
Posted by Cook In / Dine Out at 7:30 AM