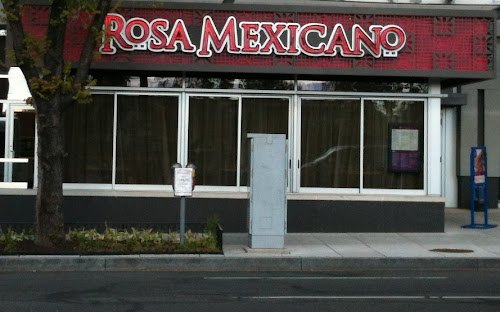 Unlike food critics who have to, most diners who have a bad experience during a first visit to a restaurant do not go back. Why would they? With hundreds of options vying for your hard-earned cash, it's a more reasonable gamble to try your luck somewhere else.

Unfortunately for restaurants though, this means one bad night can turn any first-time diners into one-time diners. Maybe this doesn't seem fair--that server who ruined your meal may have been new and not long-lasting--but it's the way it is.

My first meal at the downtown D.C. Rosa Mexicano did not leave a very good impression. I thought the meal was overpriced for rather ordinary enchiladas. The supposedly famous table-side guacamole? Not as good as the table-side guacamole served a block away at Oyamel. This was probably 8 years ago, and I hadn't been back since...until recently.

In the ensuing years, the restaurant has apparently thrived. The downtown location always looks busy, and a second opened at Maryland's nearby National Harbor. Then, just a few months ago, a third local location opened not far from my house. I decided to act in atypical diner fashion and give the Manhattan-based another chance.

I'm glad I did. Chris and I have been to the new Friendship Heights location twice and had great dinners both times. That table-side guacamole may be no better than what Jose Andres serves at Oyamel, but it scores points for being served with warm, freshly made mini corn tortillas, which also taste delicious with the chipotle house salsa.

So far, our entrees have been uniformly good. My grilled salmon served with sweet corn, kale and pancetta was cooked just right and given a nice spicy-sweet kick by its habanero-fruit white wine sauce. Even better were the short ribs. So tender and served with a savory but not too spicy tomatillo-tomato-chipotle sauce. For those that either love or loath heat, both of these dishes are marked as "medium" spicy, but frankly neither are really spicy--certainly far less spicy than the green salsa served with the guacamole.

Another winner is the chicken tortilla pie, a comforting layered dish of shredded chicken, cheese and roasted peppers served with poblano cream sauce. It's so good that I was inspired to make my own take on the dish (which I will write about tomorrow). Other dishes I've yet to try that tempt me to make return visits: the marinated pork shank and the roasted duck with mole poblano sauce. There's also a brunch, which could be enticing too.

As for drinks, although their frozen pomegranate margarita claims to be the house speciality, I prefer the simpler tradicional: silver tequila with fresh lime and agave served on the rocks. Haven't yet sampled the desserts; we're always too full.