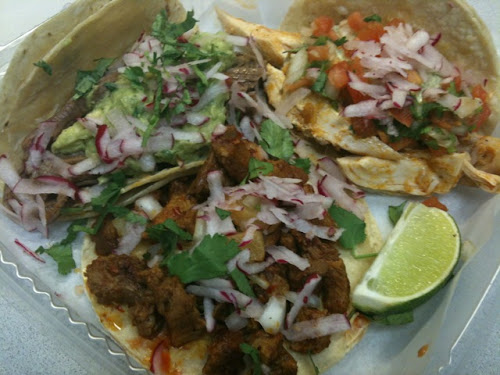 Awhile back I wrote about some downtown D.C. food truck lunch options. I thought it was time to revisit the topic.

Apart from the ongoing regulatory battle, the biggest news in the D.C. food truck of late is the arrival of Jose Andres' truck Pepe. It's been around for a few weeks now, but Andres' Spanish sandwich truck seems is still setting records for longest food truck lines (in addition to its record prices, including $20 for the Pepito de Iberico, which includes Iberico pork, Serrano Ham and roasted green pepper--sounds delicious).

Regrettably, I haven't tried Pepe yet. But not for my having not tried. Most food trucks tweet their location in the morning well before lunchtime, which you can track with a map of their locations on Food Truck Fiesta. For awhile, Pepe was tweeting it's location later than most others, although it seems to be improving. However, I've had bad luck trying to locate the truck. One day when it was going to be at the Portrait Gallery at 11:30 I was ready to go. I showed up at 11:30 even and...no pepe. I circled the block three times and even did a lap around Hotel Monaco in case Pepe's location had been a little off. No dice. I ended up getting food from another truck and learned later that Pepe was about 20 minutes to its spot. I'm determined to try it soon though.

Here's a round up of some of my best recent food truck lunches:

Chupacabra. The Chupacabra is a mythic Latin-American monster, but there's nothing scary about the food served up at the food truck by the same name. These are the best food truck tacos I've had so far (yes, better than TaKorean). Pictured above is their trio of chicken, pork and shredded beef tacos, all of which come topped with chopped radishes and cilantro, giving the spicy, seasoned meat a cool, fresh finish.

Borinquen Lunch Box. This truck serves Puerto Rican cuisine and was recommended to me by my coworker with a Puerto Rican heritage. She steered me towards the Tripleta, and I'm a better man for it. It's really, really good. As the name implies, this is a sandwich with three meats: roasted pork, skirt steak and ham, served with lettuce and potato sticks (basically mini French fries). It's not a particularly healthy sandwich, but it is very satisfying.

Carnivore BBQ. A hankering for a good barbecue sandwich is easily satisfied by this truck, whose pulled pork sandwich features a rather generous helping of shredded pork served on a bun with slaw and barbecue sauce. I thought the sandwich was really good; not too spicy, not too sweet, although that will vary depending on what sauce you choose (I opted for Memphis). 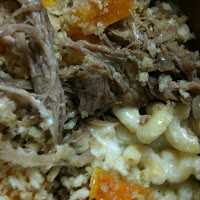 CapMac. It's been a few weeks since I visited CapMac, and they are no longer offering their winter mac, a dressed up mac & cheese featuring shredded pork, roasted butternut squash and fontina cheese (they told me today that they are now offering a roast pork Philly mac, with fontina and provolone cheese sauce and sautéed broccoli rabe). Even if this is no longer there, I imagine whatever seasonal offering has replaced it will be just as good.