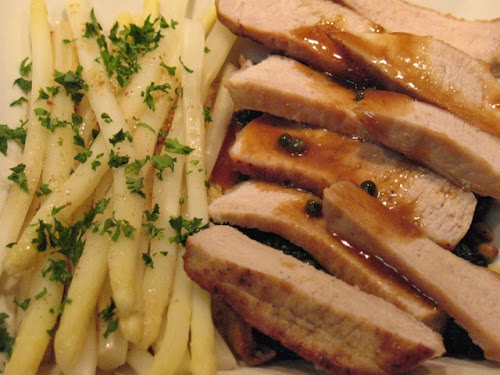 Years ago, The Washington Post published a foolproof recipe for perfectly cooked pork chops. I've made it many times since then and it works great. The meat is seared on the outside, tender on the inside, and the pan residue is ripe for deglazing to make whatever pan sauce inspires you.

There are two essentials for doing it right. First, you need a frying pan with a lid. For three chops, I find a 10-inch pan is just the right size. Second, you need to buy the right type of chops. The recipe recommends boneless chops that are about an inch thick. Thinner chops will overcook and dry out; thicker chops might work, but would require longer cooking. 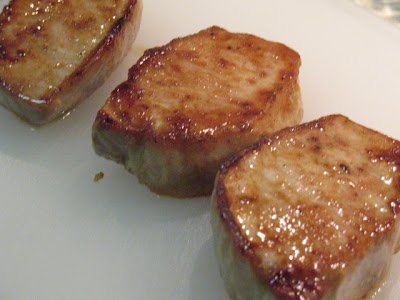 Then it's just a matter of heating the pan really hot with a little oil. Since the pan is going to be quite hot, it should be an oil with a lower smoke point, so olive oil is out, since heating extra-virgin olive oil to a high temperature will give it a funky taste. I used canola; vegetable would work too.


For the sauce, I wanted something sweet and spicy rooted in flavors that go well with pork. Since pork chops and applesauce go well together, I decided to use apple brandy as its base, adding maple syrup for complex sweetness and brined peppercorns (the soft kind you can chew whole). 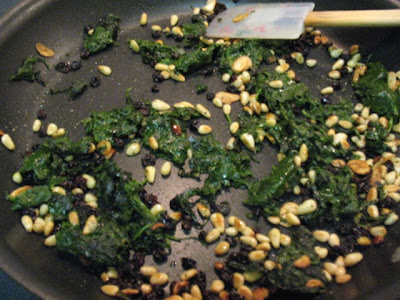 Under the chops, I made Mark Bittman's Spinach with Currants and Pine Nuts, which Chris and I both really liked. I could see pairing this with other meats or fish. And then on the side, I served White Asparagus with Brown Butter.

1. Heat canola oil in a medium-size frying pan over medium-high heat until hot but not smoking. Pat chops dry, season with seasoned salt and add to pan. Sear for 1 minute, turn pork chops and sear other side for 1 minute. Reduce heat to low, cover and cook for 4 minutes. Turn chops and cook covered for another 4 minutes. Remove chops from pan, tent with foil and allow to rest while making pan sauce.

2. Increase heat to medium. When pan juices start to sizzle, add apple brandy. Cook until reduced by about half. Add peppercorns, syrup and cream. Swirl to combine and cook for a few more minutes to thicken.

3. Slice chops into 1/4-inch slices. Arrange on plate and top with maple-peppercorn sauce.

1. Bring a large pot of water to boil. Add spinach and boil for about 5 minutes. Drain spinach and rinse with cold water.

2. While spinach is boiling, add currants to small bowl and cover with warm water. Heat a small frying pan over medium-low heat and toast pine nuts until fragrant and lightly browned.

4. Heat a large frying pan over medium heat. Add garlic and saute until golden. Add spinach and cook, stirring for about 2 minutes. Drain currants and add to pan along with pine nuts. Cook for another 3-4 minutes. Season with salt and pepper and serve.