Risotto with Sausage, Parsnips and Kale 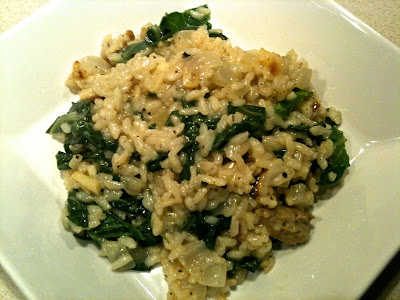 This dish is a slight modification of this week's Risotto with Parsnips and Green recipe from the New York Times that I was excited about Wednesday. It didn't disappoint, delivering a nice mix of flavors from the sweetness of the parsnips and the bitter kale. 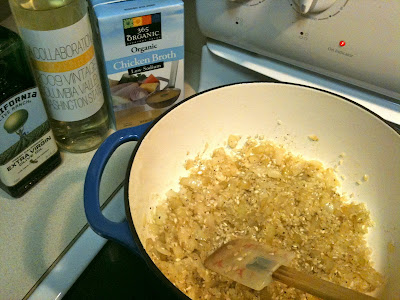 I find the tricky thing with risotto is getting the texture just right. Cook it too fast and the rice will be tough. Cook it too long and you end up with a gooey, squishy mess. The texture of this risotto turned out perfectly, the grains al dente with starchy-tangy creaminess lightly enveloping them. I used a dutch oven to cook the rice. In my experience, dutch ovens cook hotter than other pans, so I reduced the recipe's cooking temperature. 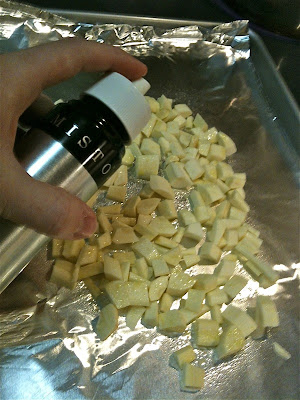 First quibble with the recipe as written is the cooking time, which I find that recipes often under estimate. It says "about 40 minutes," which is not enough time. Working as efficiently as possible, this took me an hour. To help with timing, start by preheating the oven and then prepping the parsnips for roasting. Then, while you're waiting for the oven to heat up, boil the water and prep the kale. Don't worry if the parsnips look a little burnt around the edges (as shown below). They tasted great and even the photo with the NYT recipe showed them like that. 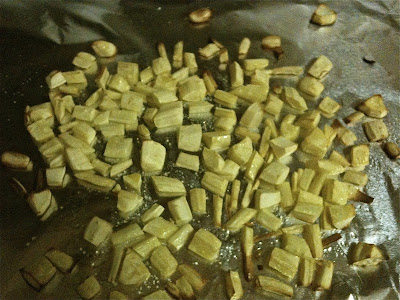 Second quibble is that the recipe says to cook the kale in the boiling water "very briefly." What does that mean? I decided it was going to be enough time for me to stir the kale once, get the colander out the cupboard and put it in the sink and stir the kale again before draining it. That seemed to do the trick as it turned out great.

The Italian sausage I added provided a nice meaty element, complimenting the other vegetables, as well as tying the dish to my spinach-fennel salad (since Italian sausage has fennel seed). I added the sausage at the beginning of the step to sauté the sage and garlic. I drained off most of the rendered sausage fat, but since there was still some fat in the pan, I omitted the 1 tablespoon of olive oil from step four. I kept the butter though, since that's an important flavor in the dish. 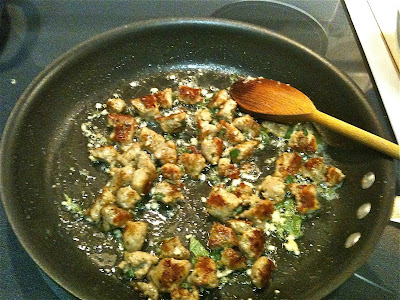 To serve with this, I prepared a simple salad of baby spinach and fennel with a lemon-honey dressing. I used a mandolin on the lowest setting (1/16-inch) to thinly slice the fennel bulb. For the dressing, I combined lemon juice with honey, dried thyme, salt, pepper and extra-virgin olive oil. 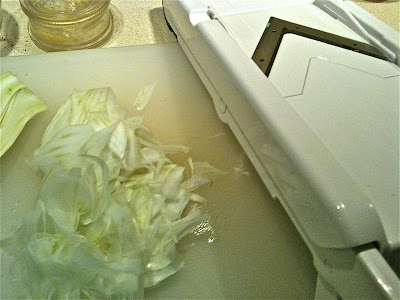 1. Heat oven to 400 degrees. Peel the parsnips, quarter them lengthwise, and remove the tough core with a paring knife. Cut into 1/2-inch random shapes, put in a roasting pan, season with salt and coat with 2 teaspoons of olive oil. Roast until tender and lightly browned, about 15 to 20 minutes. Remove from the oven and set aside.

2. Bring a pot of salted water to a boil over high heat. Remove the stems from the kale and cut it into 1/2-inch-wide ribbons. Cook kale very briefly in the boiling water (about 1 minute). Drain, cool and squeeze dry. Set aside.

3. Heat 2 tablespoons olive oil in a dutch oven over medium heat. Add the onion, season with salt and pepper, and cook until softened, about 5 minutes. Add the rice and stir together with the onions until the onions are beginning to brown, about 2 minutes. Add the white wine and cook until it evaporates (doesn't take very long). Add 2 cups broth and reduce the heat just slightly to a brisk simmer. Cook for 5 to 6 minutes, stirring well every minute or so. When the broth is absorbed, add another 1 cup of broth and continue to cook for another 5 minutes. Stir in the last cup of broth and cook for another 5 minutes, until the rice is cooked, but the grains are still firm. Taste and adjust the seasoning, adding another splash of broth if necessary. Turn off the heat.

4. While the rice is cooking, brown sausage in a large frying pan over medium heat, breaking up with a wooden spoon as it cooks. When the sausage is browned, add the butter, garlic and sage and let sizzle without browning, about 1 minute. Add the roasted parsnips and chopped greens, season lightly with salt and pepper, and stir to coat and heat through, about 2 minutes more.

5. Gently fold the cooked sausage and vegetables into the rice with the parmesan cheese and serve. 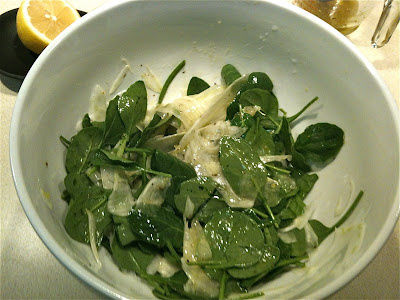 Spinach-Fennel Salad with Honey-Lemon Dressing
By A. Huddleston
(serves four)

1. Combine spinach and fennel in a salad bowl.

2. Whisk together remaining ingredients and toss with vegetables.