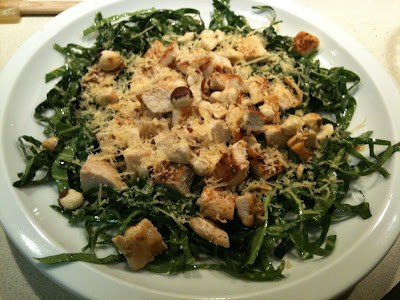 This month's GQ featured a kale salad recipe adapted from the Black Kale Salad served in Brooklyn's Five Leaves restaurant. The magazine described it as a clever take on a the classic Caesar and I was intrigued.

Kale salad seems to be all the rage these days, at least judging from my limited sample (I also saw it on a menu in New York recently and my mom has been talking about it). And since I'm still in the post-holidays-need-to-be-good phase, creative dinner salads are perfect. 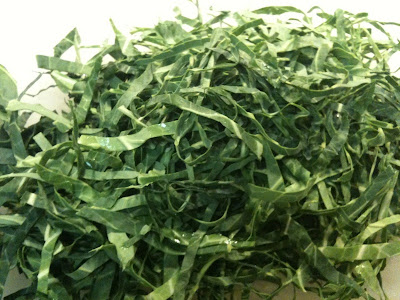 I was a little apprehensive about the kale as the salad green. I tasted a bit of it and it was much tougher than lettuce. My mom reassured me that it would be good though, so I cut it into a fine chiffonade somewhere between 1/8- and 1/4-inch wide.

For the hazelnuts, after toasting them on the stove, I used the kitchen towel technique to remove their skins, which actually worked, for the most part--the skins came off about half the nuts. I used the skinless ones for the salad and saved the rest for later. 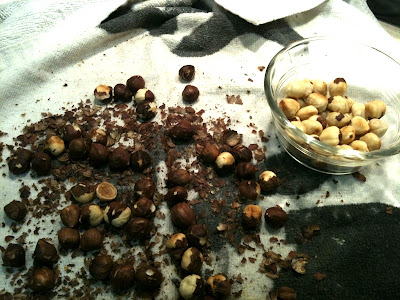 I was excited the recipe called for aged Gouda, which is an amazing cheese. It doesn't taste much like gouda, more like an earthier Parmigiano-Reggiano. It's a hard cheese with that intriguing crystallized texture you get with good Parmesan.

Although the recipe called for bacon, which I'm sure would be very delicious here, I substituted sauteed chicken to make it a healthier main-dish salad. To compensate for the lack of smokiness, I spiced the chicken with smoked paprika. 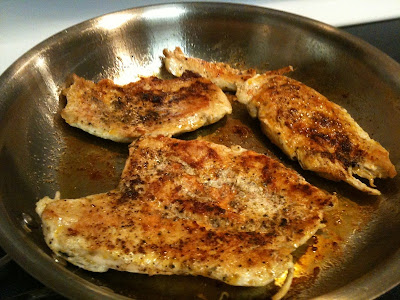 One issue I had with the GQ recipe was that it made a pint of dressing, which is way, way too much. That's like a big dinner party worth of dressing or a week of Ceasar salads for two. So I cut it down to about 1/6 of the original amount, omitting the lime, egg yolks (not doing raw eggs) and anchovy, for which I compensated with a bit more Worcestershire. Since I was making a smaller volume, I heated the milk and garlic in the microwave instead of in a pan. This took a bit of trial and error, as I boiled it over when I set the heat to 50 percent. I think about 20 percent for a minute would probably do it. I used the opposite end of a cocktail muddler to mash the garlic and milk into a paste. I also used smoked sea salt for this, but you could use regular.

Lastly, for anyone who thinks it odd that I'm touting a recipe from GQ, the magazine has quite good food writing. It was nominated for last year's James Beard Award for Food Section of a General Interest Publication, along with the winner, The San Francisco Chronicle, and The Washington Post.

1. Heat 2 tbsp olive oil in a medium (10-inch) stainless steel pan over medium heat. Pat chicken dry and add to pan when oil is hot (chicken should sizzle). Season with smoked paprika, seasoned salt and fresh-ground black pepper to taste, cooking for about 10 minutes, turning halfway. Remove chicken from pan and set aside to cool.

2. Toast hazelnuts in a small (8-inch) pan over medium-low heat, tossing occasionally. When fragrant, remove from pan and wrap with a clean dish towel. After about a minute, rub the nuts through the towel to remove nuts' skins. Set nuts aside to cool.

4. To make dressing, combine minced garlic and milk in a small bowl and microwave at a medium-low setting until the garlic is soft and fragrant, about a minute. Mash to a paste. Add lemon juice and zest, vinegar, Worcestershire sauce and 1/4 cup olive oil. Season with salt and pepper to taste. Whisk until well combined.

5. Toss kale with dressing and serve topped with chicken, nuts and cheese.
Posted by Cook In / Dine Out at 4:32 PM