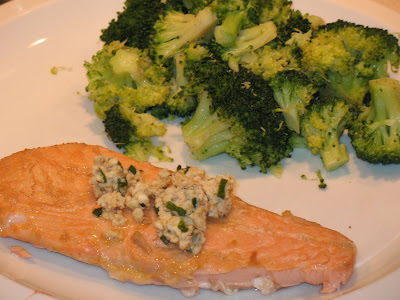 Monday night is fish night and usually that's salmon broiled with a topping of minced garlic, chopped rosemary, lemon juice, olive oil, salt and pepper. Although I return to this combination again and again because it's simple, quick and tasty, sometimes I like to try something different.
I consulted four of my best go-to cookbooks for some new inspiration. I started by going through Julee Rosso & Sheila Lukins' classics, The New Basics Cookbook and The Silver Palate Cookbook. The Silver Palate doesn't have many salmon recipes, but The New Basics' Salmon with Sesame Butter caught my eye, as I was thinking something with some Asian flair could be good. 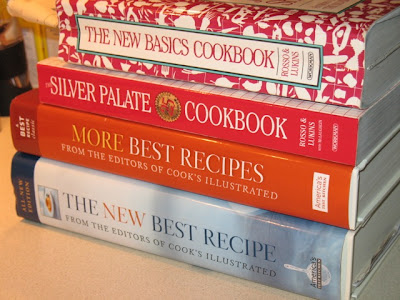 From the Cooks' Illustrated folks, I thumbed through their encyclopedic The New Best Recipe and More Best Recipes. I was intrigued by More Best Recipes' Poached Salmon with Bourbon and Maple Syrup, although I did't have shallots or chives on hand, so I decided to save it for another time. From the New Best Recipe, I spotted Grilled Salmon with Sesame-Soy Glaze, which was similar to the recipe I liked in The New Basics, however it included an extra ingredient I decided would be essential to my fish dish: fresh ginger.
So the winner is The New Basics' Salmon with Sesame Butter, albeit with some tweaks.
I decided that I wanted to bake the salmon, rather than broil it. Since I didn't have time to marinate it for a full hour, I thought this would allow more of the delicious flavors of the marinade to end up in the final product.
I mixed up the marinade, adding 2 teaspoons of minced ginger. I also swapped out the vegetable oil for extra-virgin oil because I like it better and it has more flavor. For extra flavor, I use tamari, a more concentrated type of soy sauce. 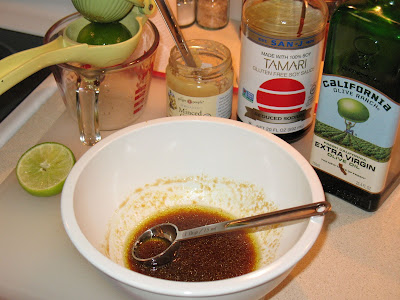 I marinated the salmon in a pie plate, which was ideal as a shallow vessel for the marinating and could also go in the oven for baking (note: the salmon is not cooking on the stove, it's just sitting there before going in the oven). 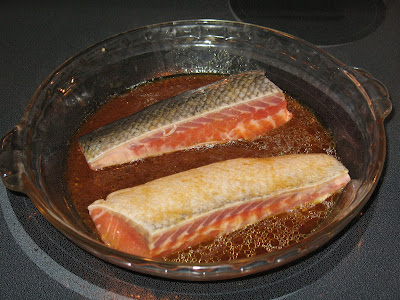 I toasted the sesame and celery seeds in the oven as suggested, then mixed them into the butter mixture, which I then put in the freezer for a little bit to harden. The New Basics recipe used a full stick of butter, which is way too much for two people, so I cut down to use just 1 tablespoon of butter, which, when combined with the other ingredients, made just enough for the two fillets. 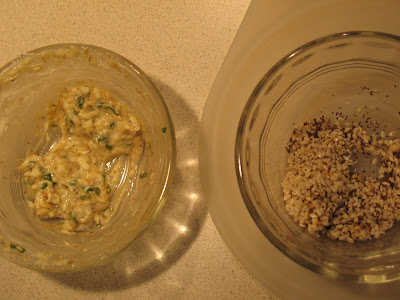 Since the seeds toasted at 350 F degrees, I decided to roast the salmon at that temperature too. After 20 minutes, I checked the salmon's internal temperature, which was exactly 140 F. Perfect.
For a side, I steamed two crowns worth of broccoli florets, which I sprayed with some extra-virgin olive oil and sprinkled with seasoned salt and fresh-ground black pepper. 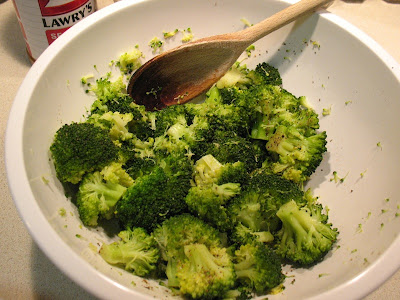 As an alternative to our usual broiled salmon, the baked salmon was quite tasty. It had a nicer texture and the sesame butter was a nice topping. Although the longer cooking time won't cause me to permanently switch from broiling fish, I'll keep this in mind for Mondays when I have a little extra time.
Baked Salmon with Ginger-Sesame Butter
Adapted from Salmon with Sesame Butter, The New Basics Cookbook by Julee Rosso and Sheila Lukins
Marinate:
2 tbsp fresh lime juice
1 tbsp extra-virgin olive oil
1 tbsp soy sauce
2 tsp grated fresh ginger
2 salmon fillets (about 6 ounces each)
Ginger-sesame butter:
1/2 tsp sesame seeds
1/2 tsp celery seeds
1 tbsp unsalted butter, softened
1/4 tsp. sesame oil
1/4 tsp. soy sauce
1/2 tsp. grated fresh ginger
1. Combine the marinade ingredients in a shallow oven-proof dish. Add the salmon, turn to coat, and marinate skin-side up for about 30 minutes.
2. Preheat the oven to 350 F. Put the sesame and celery seeds in a small ramekin and toast in the hot oven for 3-5 minutes, checking after 3 minutes to see if the seeds are fragrant and lightly browned. Remove from the oven and set aside to cool.
3. Bake salmon for about 20 minutes until the internal temperature reads 140 F on an instant-read thermometer (this is pretty well-done for salmon, which is how we like it; for rarer fish, reduce cooking time).
4. While salmon is baking, mix up the ginger-sesame butter by combining the toasted seeds with the remaining ingredients. Place in the freezer for about 5 minutes to firm up.
5. When salmon is done, remove and discard skin. Serve topped with ginger-sesame butter.
Posted by Cook In / Dine Out at 5:55 PM