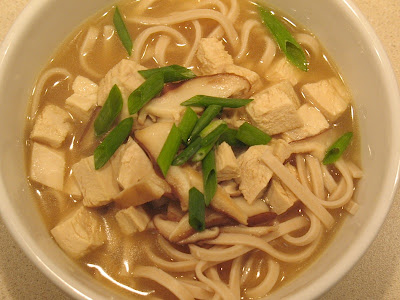 The Jan/Feb 2012 issue of Cooking Light has a tasty-looking feature on international soups.
I was initially interested in the Spicy Thai Coconut Soup (a.k.a. Tom Kha Gai), but found a recipe elsewhere that doesn't include sambal oelek. The Greek Avgolemono sounds tasty, as does the German Chicken Soup with Cabbage and Apple.
In the end, possibly in anticipation of the new noodle bars coming soon to Penn Quarter, I settled for the Japanese selection, Chicken-Udon Soup.
Since I've never made this before, I adhered pretty close to the printed recipe. I didn't substitute any ingredients, although I did perform a couple steps in different ways. I had to buy star anise for this, which is a beautiful spice that lives up to its name. I shot it by a paring knife so you can get a sense of its size. 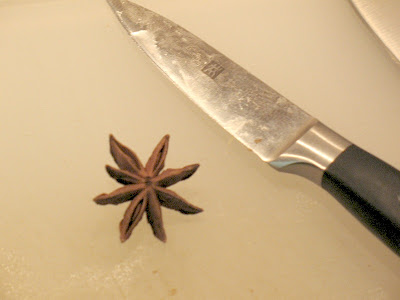 The recipe calls for 2 cups shredded cooked chicken breast, but doesn't offer any hints about the best way to cook it. So I did it in the microwave and cubed the chicken, rather than shredded it. Since it's going in a soup, it doesn't really matter and this worked fine. 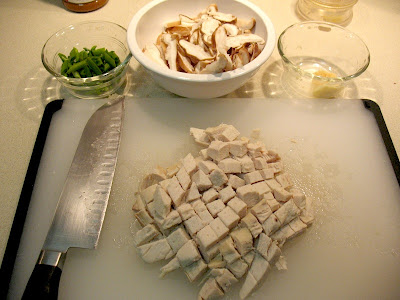 Second, to avoid dirtying multiple large saucepans, I did step 3 with a medium-size frying pan while simultaneously reheating the flavored stock from step 1 in the first large saucepan and then adding the mushrooms to the stock once they were done cooking in the wine. 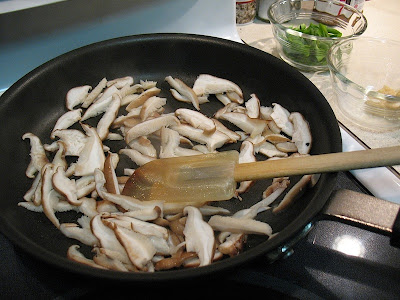 The broth was quite tasty, as were the shiitake mushrooms. My only gripe with this dish, which I should have remembered from previous udon soup experiences, is that it's hard to eat unless you have chopsticks. You can use a fork to twirl the noodles, but then you're not getting any broth. You can use a big spoon, but the noodles won't stay on it. Needless to say, eating udon is a little messy; have napkins ready.
Chicken-Udon Soup
From Cooking Light, January/February 2012
(recipe here)
Posted by Cook In / Dine Out at 7:13 AM