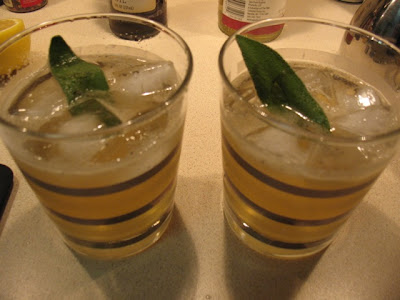 GQ published a scotch cocktail this month called The Penicillin, a concoction of both blended and single malt scotches with lemon juice, ginger syrup and honey. Sounds tasty. It put me in the mood to explore a scotch-based cocktail this week.
Of course even putting scotch--particularly single malt scotch--in cocktails is bound to raise a few eyebrows. As GQ notes, it is the spirit of the "1%," the one that comes not just in a bottle, but often boxed and ranges in price at my local liquor store from $19 to $750 for a standard 750 ml size.
To say that fine spirits are too fine for cocktails makes me wonder what such people think of cocktails. Do they consider it a method to make something bad taste palatable? To my thinking that's not the purpose of a cocktail. A good cocktail should just be good. Period.
On my home yesterday, I stopped in Calvert-Woodley to pick up a single malt scotch and ended up with Tomatin, a bargain at $25.
Then I went combing through The PDT Cocktail Book looking for inspiration. I saw recipes combining scotch with citrus, pear and ginger flavors, which are among my favorites for cocktails. And then I hit on a winner that combines all of those: The Sage Old Buck.
It called for vanilla syrup, which I didn't have, so I substituted some Licor 43, a Spanish liqueur with citrus and vanilla flavor. The first round I thought was a bit too sweet, probably because I upped the ginger beer, so I dialed down the simple syrup a bit. I also reigned in the scotch just a wee bit so the total volume of spirits would be no more than 2 oz. The results were a hit with both Chris and me.
Peppery Ginger-Citrus Scotch Cocktail
Adapted from Sage Old Buck, The PDT Cocktail Book by Jim Meehan
8 black peppercorns
.5 oz. simple syrup
1.25 oz. single malt scotch (Tomatin)
.5 oz. pear liqueur (Rothman & Winter Orchard Pear)
.25 oz. Licor 43
.75 oz. lemon juice
3 oz. ginger beer
Sage leaf (garnish)
Muddle peppercorns with simple syrup. Add to shaker with ice, scotch, liqueurs and lemon juice. Shake until cold. Pour over ice in rocks or collins glass and top with ginger beer. Garnish with a sage leaf.
Posted by Cook In / Dine Out at 4:37 PM