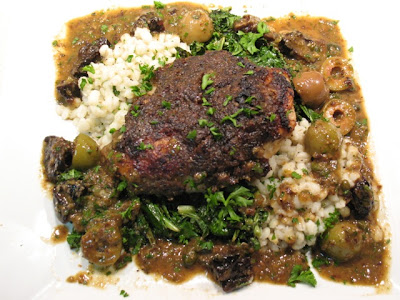 I've already mentioned cookbook and food writers Julee Rosso & Sheila Lukins twice and here they appear again. For me personally as for many others, they were an important inspiration in my early cooking.

Chicken Marbella is probably their most famous recipe. According to its introduction in The Silver Palate Cookbook, it was the first main-course entree served in their Manhattan food shop, The Silver Palate. When I was young, my mom made this sometimes when we had dinner guests, and I always really liked it. The best part is the sauce, a savory-sweet composition white wine, brown sugar, olives, vinegar, prunes and herbs. I made it myself when we entertained some friends recently, and it's still a crowd-pleaser.

This month's issue of Cook's Illustrated pays homage to the dish while offering an updated version. Writer Dan Souza identified three issues with the original recipe that he thought were ripe for updating: the plain chicken skin, bland meat and an overly sweet, lackluster sauce. I take issue with him calling the sauce "lackluster," however, I was intrigued by his attempt to re-create one of my favorite dishes.

To address these issues, he made two major modifications. The first was to ditch the marinade in favor of a flavorful paste that is used in part to form the basis of the sauce but more importantly as layer of flavor slathered on top of the chicken. In addition to the green olives, prunes, capers, garlic and oregano of the original recipe, he added some anchovy fillets for depth and red pepper flakes for heat. 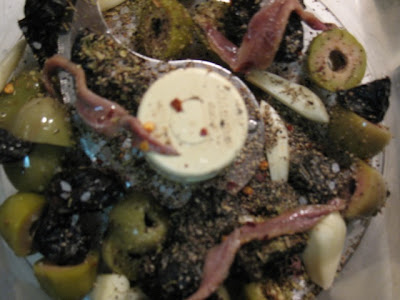 When blended in a food processor, it's not much to look at (see below). But trust me, it was really good and doesn't look so bad once it's darkened from roasting on the chicken (see top photo above). 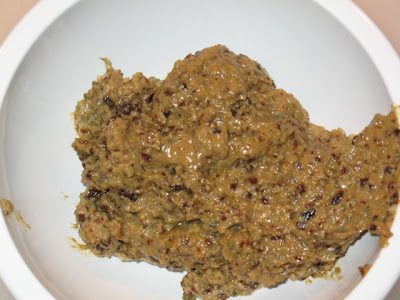 His other major modification was to brown the chicken skin. This was a really great idea, for browned chicken skin adds a wonderful flavor to the dish that was missing before. 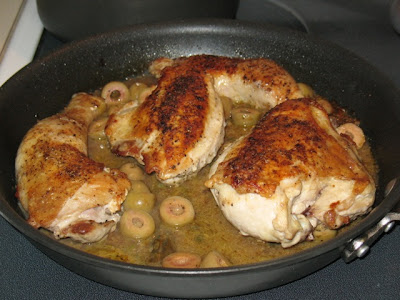 For sides, I made the flash-cooked kale from Mark Bittman's app I raved about recently and a simple barley salad dressed with lemon and parsley. 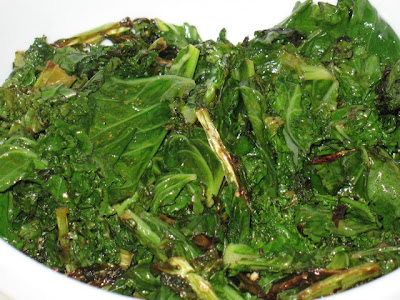 The updated Marbella was definitely tasty, and I agree Souza was able to improve the flavors. It was a lot more work though. One of the nice things about the original dish is that you just toss a bunch of ingredients together to marinate the chicken and then pop it in the oven with a few more ingredients. When I make this again, I might attempt a sort of hybrid between the two where I brown the chicken skin but keep the sauce from the original recipe. Sounds like a good experiment!

Barley Salad with Lemon and Parsley
By A. Huddleston

1. Boil 4 cups water in a large sauce pan. Add barley, cover and reduce heat to low. Cook barley about 45-50 minutes. Drain barley and put in a large bowl. Combine with olive oil, lemon juice, parsley and garlic. Season with salt and pepper to taste.
Posted by Cook In / Dine Out at 9:03 PM