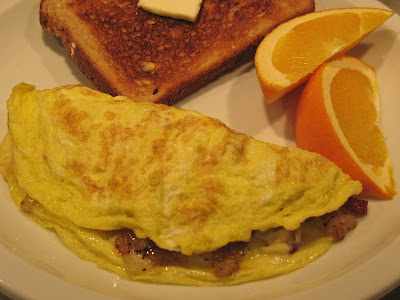 Omelets are a satisfying and versatile breakfast food that can be as simple as just eggs or as complicated as you want, providing a foundation for innumerable combinations of vegetables, herbs, meats and cheeses. With this step-by-step guide, I'm seeking to make omelets as foolproof as possible.
Omelets can also be a bit scary. For many home cooks, what begins as an omelet often ends as a scramble. Tasty for sure, but not the desired finished product. Many experts have weighed in on omelet-making, and while the techniques from chefs like Julia Child and Jacques Pépin are interesting, they aren't simple to master. All that shaking and tapping probably gets you perfect results, but my simpler method, while not perfect, does a satisfying job with more ease.
Step 1: Prepare the fillings 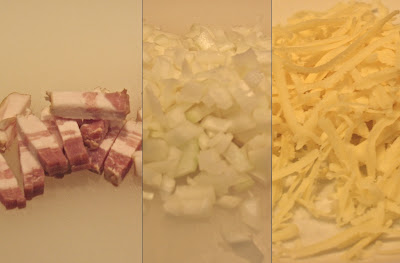 For this example, I made a simple omelet of bacon, sautéed onion and cheddar cheese. I sliced two strips of bacon into lardons (i.e. little strips about 1/4- to 1/2-inch wide), diced a small yellow onion and shredded and 1/2 cup of cheddar cheese with the larger shredder. Using a 10-inch nonstick frying pan, I browned the bacon, set aside the cooked bacon and removed most of the bacon fat from the pan and then sautéed the onion with seasoned salt and fresh-ground black pepper (you could also completely drain off the bacon fat and sauté the onion in olive oil, if you prefer). 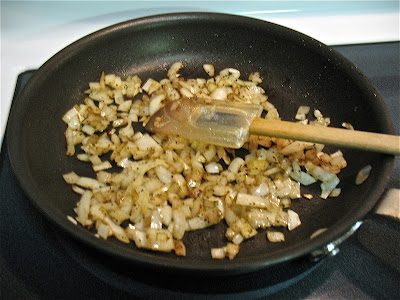 Step 2: Prepare the pan and eggs
For making an individual, two-egg omelet, an 8-inch nonstick frying pan works best. A larger pan will spread the egg out more, making it thinner and thus more difficult to handle. I begin by heating the pan over medium heat with 2 teaspoons of extra-virgin olive oil, which should be enough to coat the bottom of the pan. I beat 2 eggs in a 1-cup glass measuring cup using a fork (about 70 beats). If you're making multiple omelets, you could beat all the eggs together and portion them out into the pan, but I wouldn't recommend it. It's simpler to go two eggs at a time. 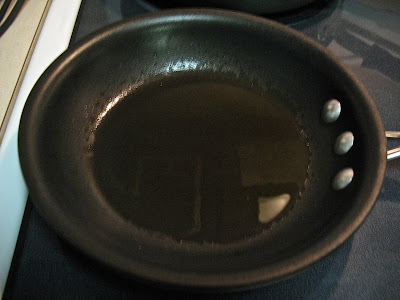 Step 3: Cook the eggs
The eggs will cook quickly, so be sure to have all your equipment ready before you start (the spatula, the larger wedge spatula and the plate). Pour the eggs into the center of the hot oil in the pan. Don't pour the eggs into the frying pan until it's hot. When the air above the pan feels hot and the oil swirls around the pan as easily as water, you know it's ready. Putting the eggs in too soon will make it soak up more oil and possibly stick to the pan. 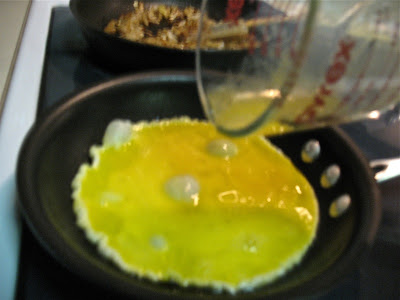 Let the egg set on the bottom and then, using a rubber or silicone spatula, stir the center a little bit so it doesn't cook too much while the outer parts of the omelet are cooking. Use the spatula to lift one side of the omelet while tilting the pan about 30 degrees toward the spatula. This allows uncooked egg to run down around the spatula to the pan, filling in underneath the cooked egg. I start on the right side, then do the top, then the left side and then the bottom. If there is still runny egg on top, I keep repeating the process. The egg should look like this now: 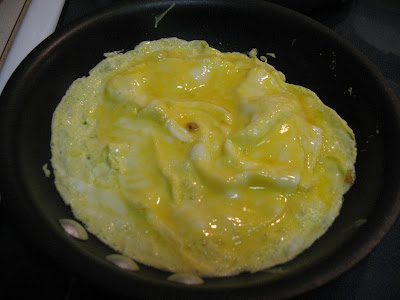 Here's the trickiest part: the flip. This is the least foolproof and probably scariest step. And to be honest, there's no substitute for practice. So if at first you don't get it, keep at it and eventually (hopefully) you'll have it down. The action should come from your wrist, flicking the pan at a slight angle and making sure you keep the pan underneath the egg. Don't try to "throw" the egg up into the air or you'll have a mess for sure. It shouldn't be airborne much at all. Here's the results after a successful flip: 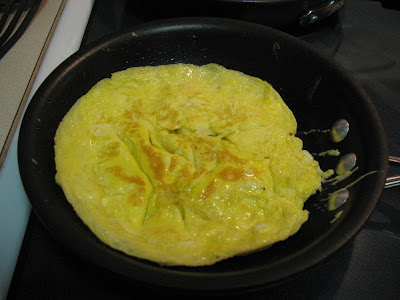 If you're too hesitant to try the flip, there are alternatives. First, you don't need to flip at all if you like (or don't mind) a slightly uncooked center. It't not my thing though. Second, you can use the broiler, which I did for many years. While you're preparing the fillings and starting the eggs, heat the oven broiler with the rack in the highest position (about 3-4" from the broiler). After the step to lift the cooked omelet and allow the runny parts to set under it, put the frying pan in the oven under the hot broiler to set the top. Watch it carefully--too long under there and it will puff up like a frittata. Like the failed omelet that becomes a scramble, this isn't a taste issue so much as not the desired product.
Step 4: Finish the omelet
After flipping (or broiling) the omelet, add the fillings. Be sure not to overfill it. It helps to put the filling more on one side of the omelet, which makes it easier to fold the other side over it. 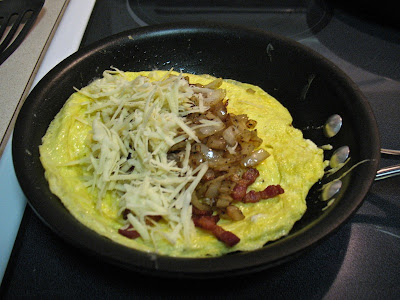 Using a wedge spatula, fold the omelet in half over the fillings. 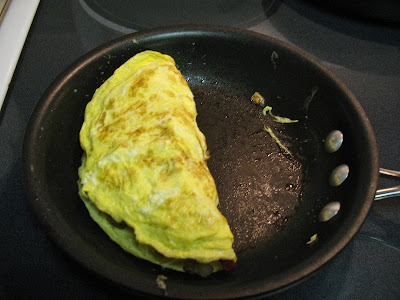 Then, using that same spatula, slide the omelet onto the plate. Voila! A tasty omelet that can be served by itself or with toast, fruit, potatoes, etc. To make another omelet, repeat the process, adding another teaspoon of olive oil in step 1. 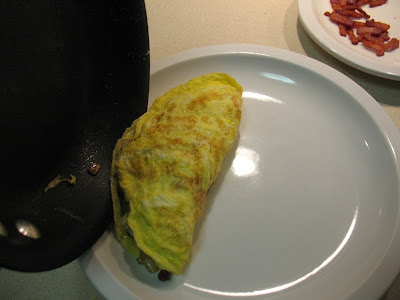 What you fill the omelet with is up to you. In addition to bacon, onion and cheddar, other combinations I like include:
Posted by Cook In / Dine Out at 5:27 AM