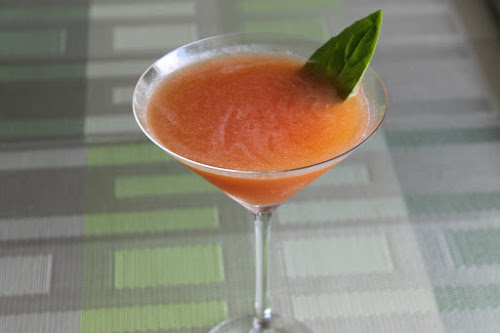 8-2-Eat is my food-focused list series. A perfect Friday distraction. And it won't be just about cooking--it's about drinking too! Today's list is all about my favorite spirit, gin, and great cocktails to enjoy it in. Here are four classics and four originals.

1. Gin & Tonic: This is the best place to start with gin, the simple, refreshing combination of gin (I prefer a classic London dry for this) with sweet, effervescent tonic water made ever-so-slightly bitter with quinine. Feeling adventurous? Try the more sophisticated Spanish version, Gin Tonic.

2. Dry Martini: Some people like their martinis made with vodka. They're wrong. (There, I said it!) A martini made with a very good gin (like Plymouth or Leopold's), dry vermouth (I prefer Dolin) and a green olive (not stuffed) or lemon twist is a beautiful, beautiful thing.

3. Vesper: Vodka, however, is welcome in this martini variation, which originated in the first James Bond novel, Casino Royale (it appears in the 2006 Daniel Craig bond film too). This gin and vodka drink was originally made with no-longer-produced Kina Lillet. Instead, use Cocchi Americano.

4. Negroni: Last week was Negroni week, a celebration sponsored by Imbibe magazine and Campari, so this simple, summery mix of gin, Campari and sweet vermouth has been on my mind (and in my glass) recently.

7. Tipsy Gazpacho: A lot of people make boozy gazpacho by just adding vodka to the cold tomato soup. I went a more interesting route, using a roasted tomato syrup, basil, lime juice, amontillado sherry, habanero shrub and American dry gin to evoke the flavors of gazpacho but in a package that is a true cocktail. This recipe was named a finalist in the 2014 Washington Post tomato recipe contest.

8. Whore's Bath: Rude name aside, this is one of the most popular things I've ever created. This gin, Cointreau, Benedictine and grapefruit cocktail inspired by the television comedy Happy Endings that ran on ABC from  2011 to 2013. Specifically, I came up with it based on an episode in which one of the characters runs a food truck and serve a gin-based cocktail called "Whore's Bath." The show apparently used my recipe in some promotion materials (I don't think I was credited, sadly). It looks like a bar may have served it. It even has a Reddit.