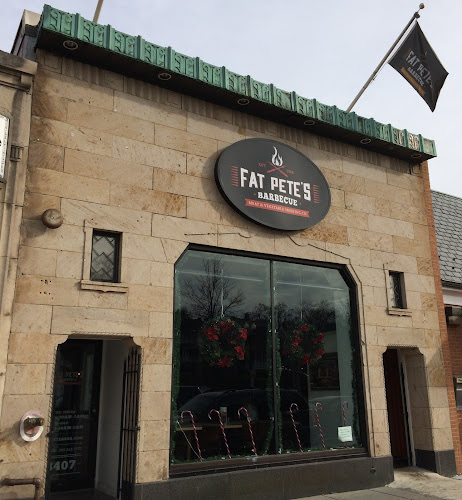 Yes, it literally does. There's something so perfectly appetizing about smoky, tender, perfectly seasoned meat served with a spicy-sweet sauce and a variety of sides that define good comfort cooking. Clearly, I really love barbecue.

Unfortunately, until recently, I wasn't getting enough of it. I enjoyed wonderful barbecue during my recent Southwest travels from places like Iron Works BBQ in Austin, Texas; Lockhart Smokehouse in Plano, Texas; and Big John's Texas Barbecue in Page, Arizona. While D.C. has long had some good barbecue places, they aren't particularly convenient for me. That's changed in the last few years though, as we've seen real growth in this segment (recently chronicled by the Washington Post's Tim Carman, who ranked the area's best BBQ establishments). 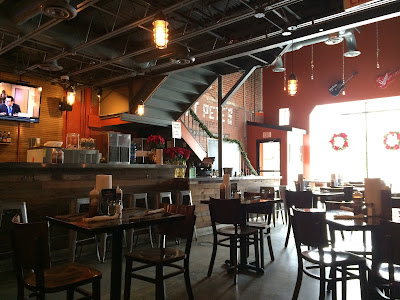 As luck would have it, one of the best places to open within the last year is a short walk from home, yet I'd be willing to make the trek even if Fat Pete's wasn't so convenient, for it embodies pretty much everything I want in a good barbecue restaurant.

Like quite a few other area BBQ joints, Fat Pete's doesn't adhere to a particular regional barbecue style, so you can get Texas-style smoky sliced brisket alongside North-Carolina-style chopped pork and mix-and-match the sides to your heart's content. This an approach I rather like: I'm partial to brisket, but I tend to like the Southern-style sides best. 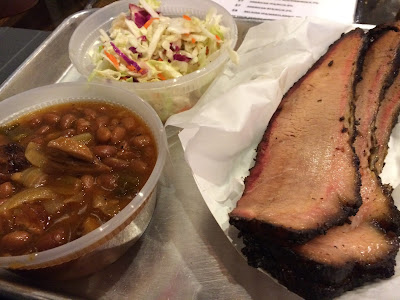 Although at Fat Pete's I've yet to go wrong with anything I've ordered. The brisket is phenomenal. Each time we've had it, the meat arrives smoky and tender, and the sliced brisket is particularly juicy (you can get it sliced or chopped). In my experience this is a rarity, as brisket can sometimes dry out. It takes skill to cook meat for a long time and have it retain sufficient moisture. The smoky chopped pork is also very good; it arrived lightly sauced and topped with a few strands of coleslaw. Meat entrees are served as "platters" with two sides. Not up to a platter? You can get most of the meat offering generously portioned into a potato-roll sandwich served with one side. I got the succulent pulled chicken this way, a sandwich so large I ended up having to eat it with knife and fork.

Some barbecue snobs turn their noses up at barbecue sauce, claiming that good barbecue doesn't need sauce. I'm not a big fan of that line of thinking. I don't think there's anything "wrong" with serving excellent food with condiments. The more flavor the better, in my opinion. It appears that Fat Pete's shares that view, as they offer a wide variety of homemade barbecue sauces. At the table, you'll find their Memphis-style sweet and Kansas-City-style spicy sauces. Both are tomato based. I like to mix them together for a spicy-sweet kick. If you want to try the others, just ask and they'll bring you beefy Texas mop sauce, South Carolina Mustard sauce, North Carolina vinegar or Alabama white (mayonnaise-based). 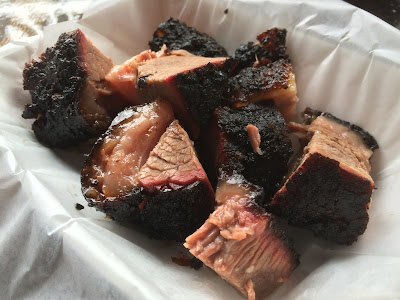 As if my appetite needed any more whetting, there are a selection of great starters here, the best of which is the burnt ends--fatty end pieces of brisket that have more of the blackened edge (known as "bark"). They are rich, smoky and addictive. Fat Pete's also serves their burnt ends in a decadent grilled cheese sandwich with Vidalia sweet onions and Swiss and American cheeses. Hush puppies are listed as a side, but I like having them as a starter, especially if they're as good as the version Fat Pete's makes, stuffing the fried corn fritters with tangy goat cheese and poblano peppers for just a bit of kick.

Among the sides, the barbecue beans are our favorite, and they do a nice job balancing what I like in a good bean side. Sometimes Texas-style beans are disappointing, as they aren't sweet like the Southern style. Yet too heavy a hand with the molasses or brown sugar in Southern baked beans can be a problem. Fat Pete's manages a nice compromise, serving a blend of pinto, kidney and canneloni beans flavored with beef and pork and just a touch of sweetness. I also really like the braised collard greens, which have a good spicy-sour profile from jerk seasoning and cider vinegar. Coleslaw fans can enjoy their shredded cabbage with a Carolina-style vinegar dressing or a creamy dressing; both are good, but I prefer the former. Fat Pete's also does a decent mac & cheese (although, as Chris points out, I make such good mac & cheese at home it's hard to justify getting it out).

As for drinks, barbecue usually puts me in the mood for whiskey or beer and Fat Pete's full bar has a great selection of beer, wine and cocktails. They make a decent Manhattan (which we ordered made with rye, of course) and it was at Fat Pete's that I first had Rebel IPA, a new American-style IPA from Sam Adams that we are enjoying these days.


If, after enjoying all these delectable dishes, you still have room for dessert, how about a homey slice of apple pie? I'm kind of picky about apple pie (again, it's something I like to make), and theirs, topped with an oaty crumble, was pretty satisfying.

Service at Fat Pete's is also very good and always friendly, even if it gets a little slow when they are very busy (like they were on Memorial Day). A real plus at Fat Pete's is that they offer full service. A lot of barbecue places make you stand in line to get your food, or worse, separately for both your food and drinks. At Fat Pete's you sit down and order like a normal restaurant. I really like that.

Fat Pete's opened last summer in Cleveland Park, an area long-known for great food that has struggled in the last couple years as it suffered a number of notable restaurant closures. The space Fat Pete's occupies has been particularly challenging: after the space's McDonald's closed in the mid '00s (something you didn't see much back then), it sat vacant for a long time before becoming a seafood restaurant (Tackle Box) and then a Spanish tapas joint (Pulpo)--neither of which lasted very long. Here's to hoping that Fat Pete's satisfying barbecue fare has true staying power.