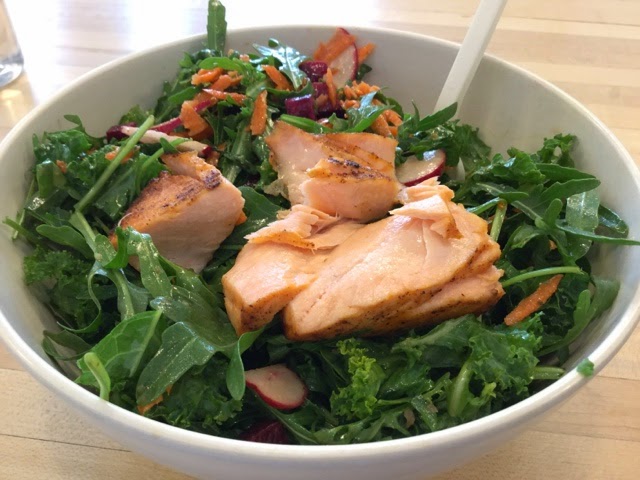 It may have snowed in D.C. on Friday, but the weather perked up over the weekend, officially ushering in spring. And that means it's time for a refresh for the menu at Sweetgreen, D.C.'s fast-casual salad chain that has expanded well beyond the D.C. area to locations around New York, Boston, Philadelphia and, coming soon, Los Angeles.

In the fall, I wrote about how the chain had changed the approach to its menu, dropping its monthly salad special in favor of a wider selection of rotating seasonal offerings. That approach continues with the new spring menu revealed today with two new salads and a vegan grain bowl.

I was eager to try the Salmon and Radish salad, made with roasted salmon, kale, arugula, beets, carrots and a mustard-oregano vinaigrette. The staff at my local Sweetgreen were very excited about this new salad when I visited last week. The salmon is very good--cooked through but not overdone and lightly seasoned. The zesty dressing complements it nicely, and I love the crunch from the radishes and beets.


The salmon salad is a particular exciting new offering for Sweetgreen. Although not sourced locally like a lot of its ingredients, Sweetgreen chose Chilean Verlasso salmon as its provider because Verlasso shares Sweetgreen's commitment to sustainability. "While developing our spring menu, we listened to feedback from guests who wanted more lean protein options that were suitable for both lunch and dinner, " says Michael Stebner, Sweetgreen's director of culinary innovation, in a statement released with the new menu. "We set out to find a new protein offering and collectively decided on salmon for its numerous health benefits."

Although some salmon farming practices are controversial, Sweetgreen notes that Verlasso's salmon was rated a "good alternative" by the Monterey Bay Aquarium Seafood Watch program. Seafood Watch is an educational effort to help consumers and businesses make seafood buying choices that are better for the environment. Seafood Watch says to "avoid" most types of imported farmed Atlantic salmon, but notes Verlasso as an exception.

Spring is going to be big for Sweetgreen in other ways. In addition to these new menu items, the chain is sponsoring Sweetlife, a 2-day music festival in Columbia, Maryland featuring Kendrick Lamar, Calvin Harris, The Weeknd, Charli XCX and more. Proceeds from the event support Sweetgreen's education program, Sweetgreen in Schools, an effort to promote healthy eating among school-age children.

This spring you can eat at Sweetgreen and really feel like you're doing something good for your body, your community and the planet. It's nice to see a fast-food chain with such lofty aspirations that also manages to deliver a delicious product. It's become a place I'm happy to frequent on a weekly basis.
Posted by Cook In / Dine Out at 11:44 AM