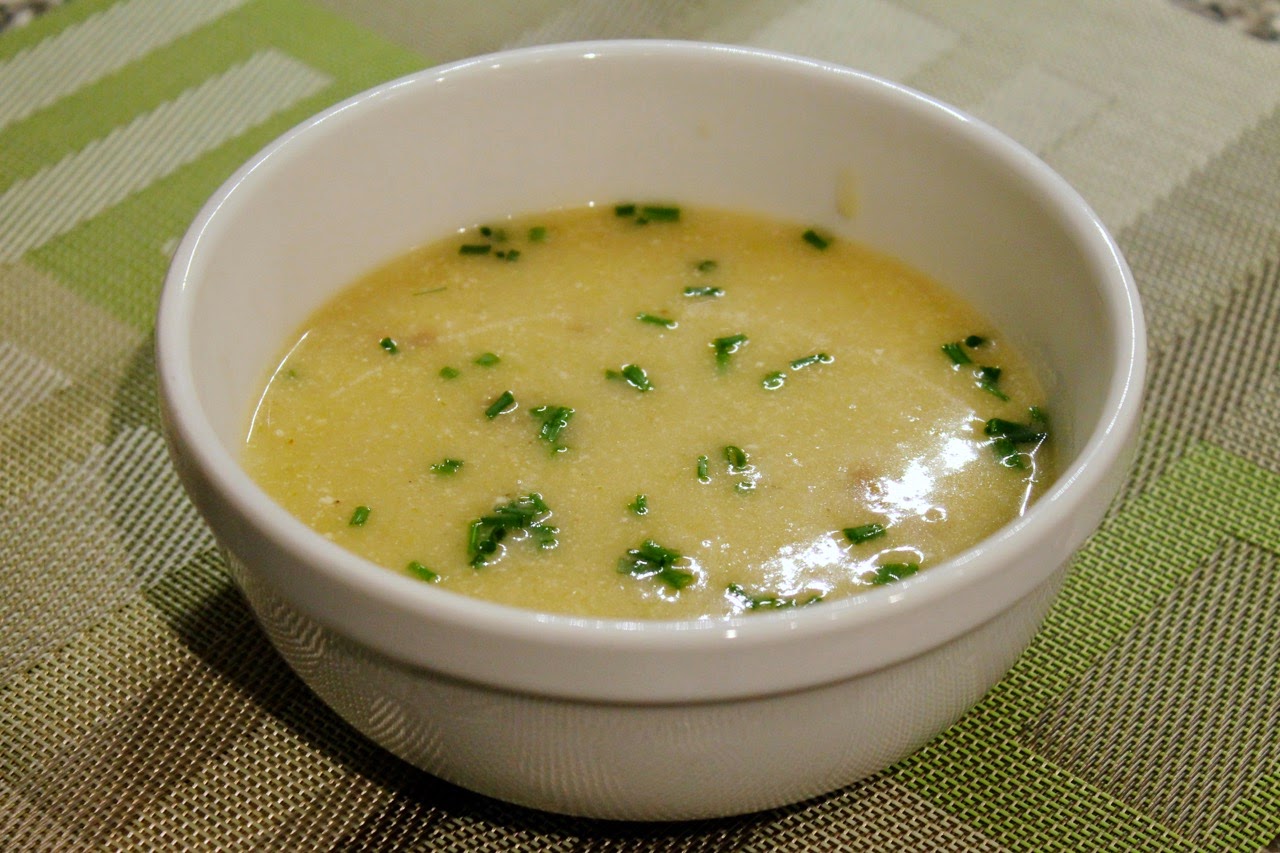 Soon spring produce will be arriving, and I'll be switching my focus to all those wonderful fresh flavors. I'm starting to see asparagus at the grocery store, but for now, we're still mostly looking at winter vegetables.

So it's a good time for one last hearty winter soup, and potato-leek soup seems perfect. It feels like a good soup for transitioning into spring: vegetable focused and not as heavy as many other winter soups. 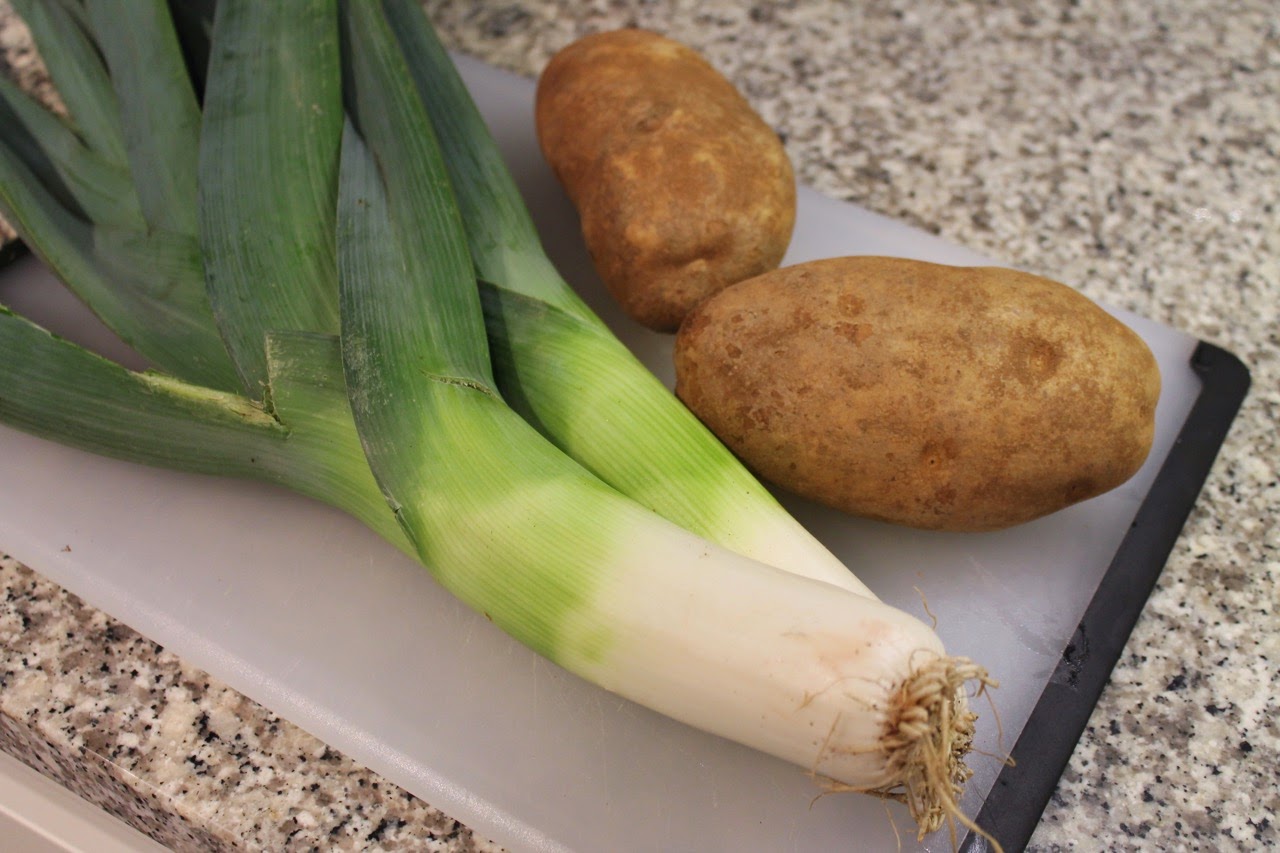 Yet, when I made a batch of it recently, I was disappointed. I found it too lacking in flavor. Leeks are like onions but milder and potatoes are...potatoes. They are always mild. A little bay leaf, salt and pepper just wasn't enough to satisfy my craving for bolder flavors. Was it possible to create a potato-leek soup with a little more punch but without overwhelming these two key ingredients.

I threw the question out during a recent Washington Post Free Range on Food Chat and got a lot of great responses, such as adding herbs or other spices (a no-brainer), other vegetables (like watercress or mushrooms), curry powder (a great idea I'd like to try sometime) and ham or chicken. The last suggestion got me thinking about using bacon, which goes well with just about anything, but it always a welcome partner for potatoes and onion. I figured it would work nicely in this soup. 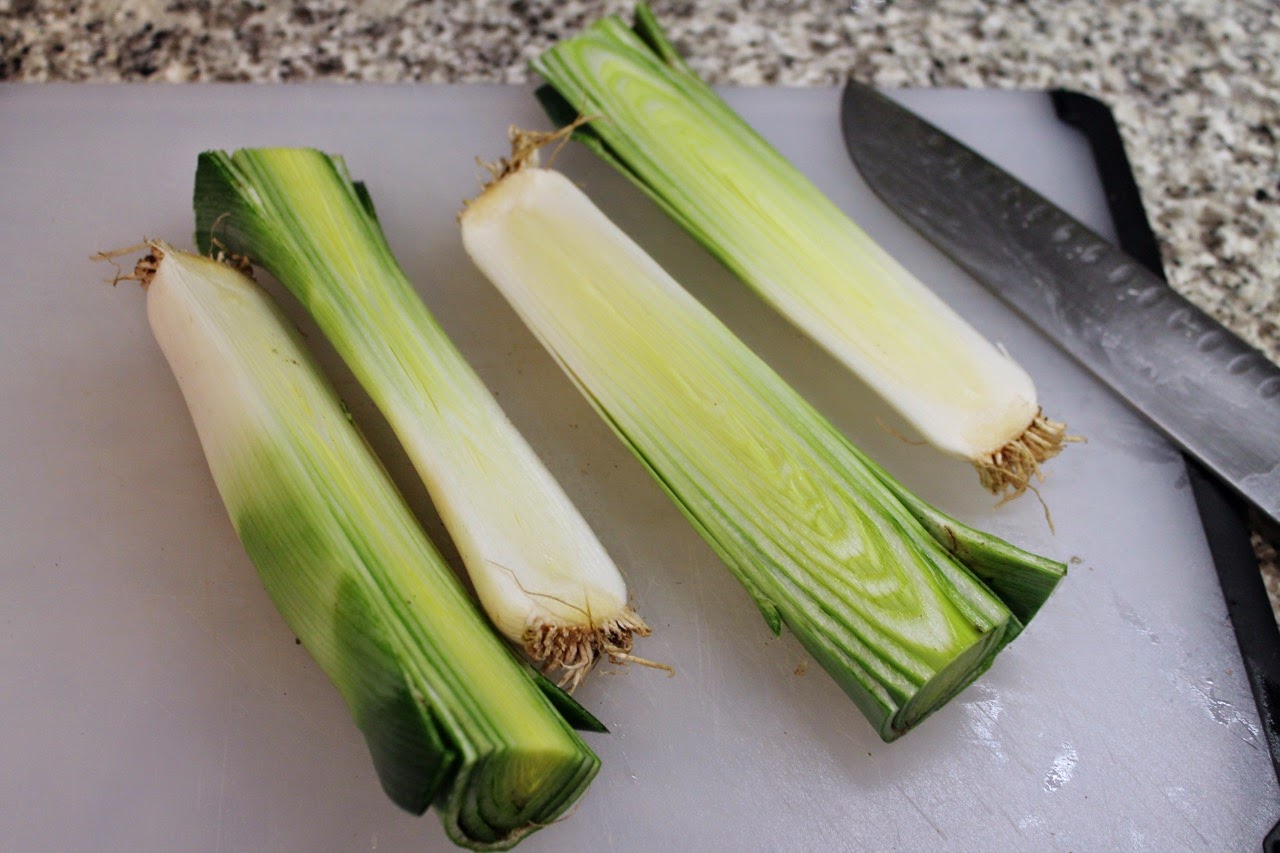 For maximum bacon flavor, I used Benton's hickory-smoked bacon, which I've mentioned before is my favorite. I only needed 1/3 of a pound (4 or 5 strips) to add some nice smoky and meaty undertones. Although I pureed the soup for a smooth texture, I kept the bacon out of the soup for that step, as I wanted it in larger pieces. A search for potato-leek soup recipes with bacon led me to a great one by Food Network Kitchen, aspects of which I used as the template for the recipe below.

But bacon alone wasn't enough. I wanted some tang, so I was intrigued by J. Kenji López-Alt's Serious Eats recipe, which calls for adding buttermilk in addition to cream. Most buttermilk I see at the grocery store is reduced-fat, but Whole Foods has whole cultured buttermilk. I decided to use a little bit more of that than López-Alt's recipe called for and skip the cream. For spice, I used freshly ground white pepper and just a little bit of chipotle pepper hot sauce, which added some additional smokiness. 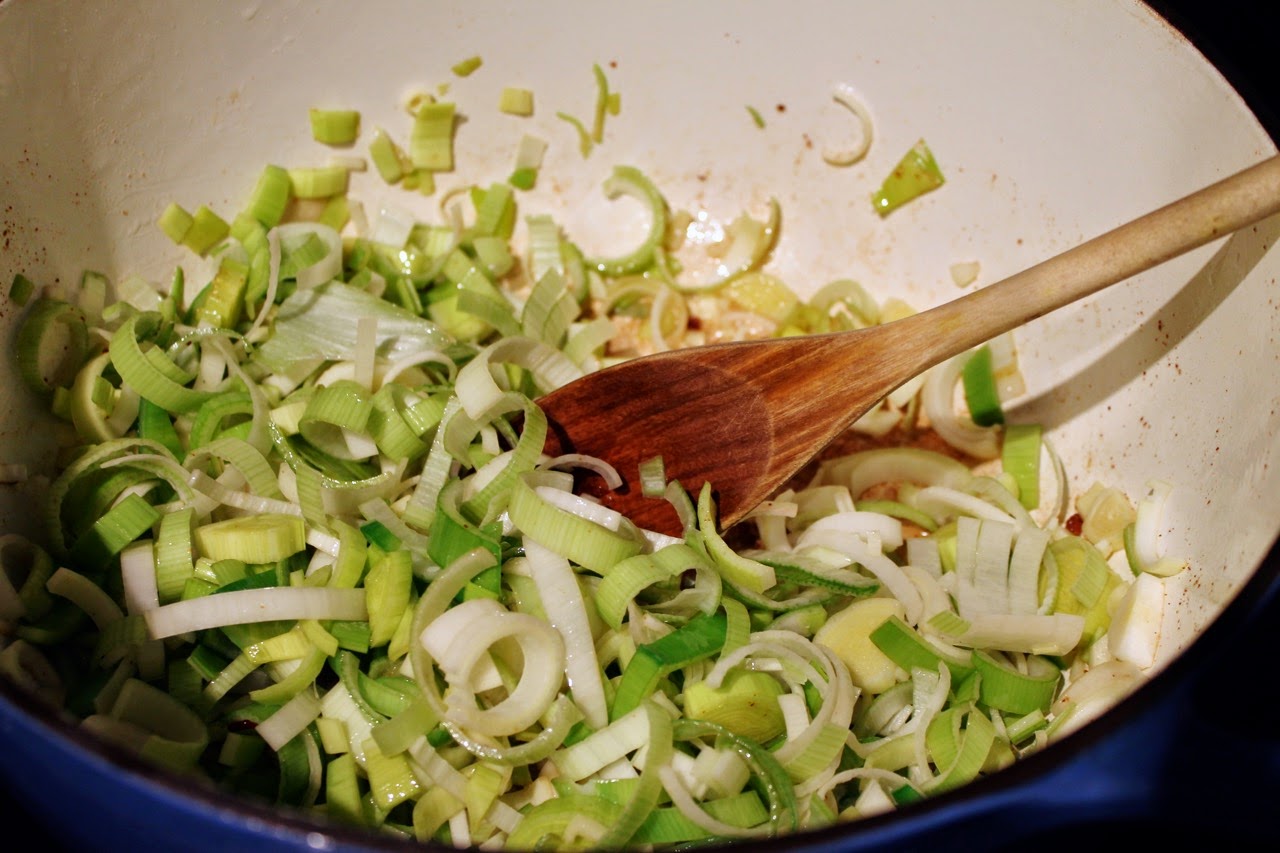 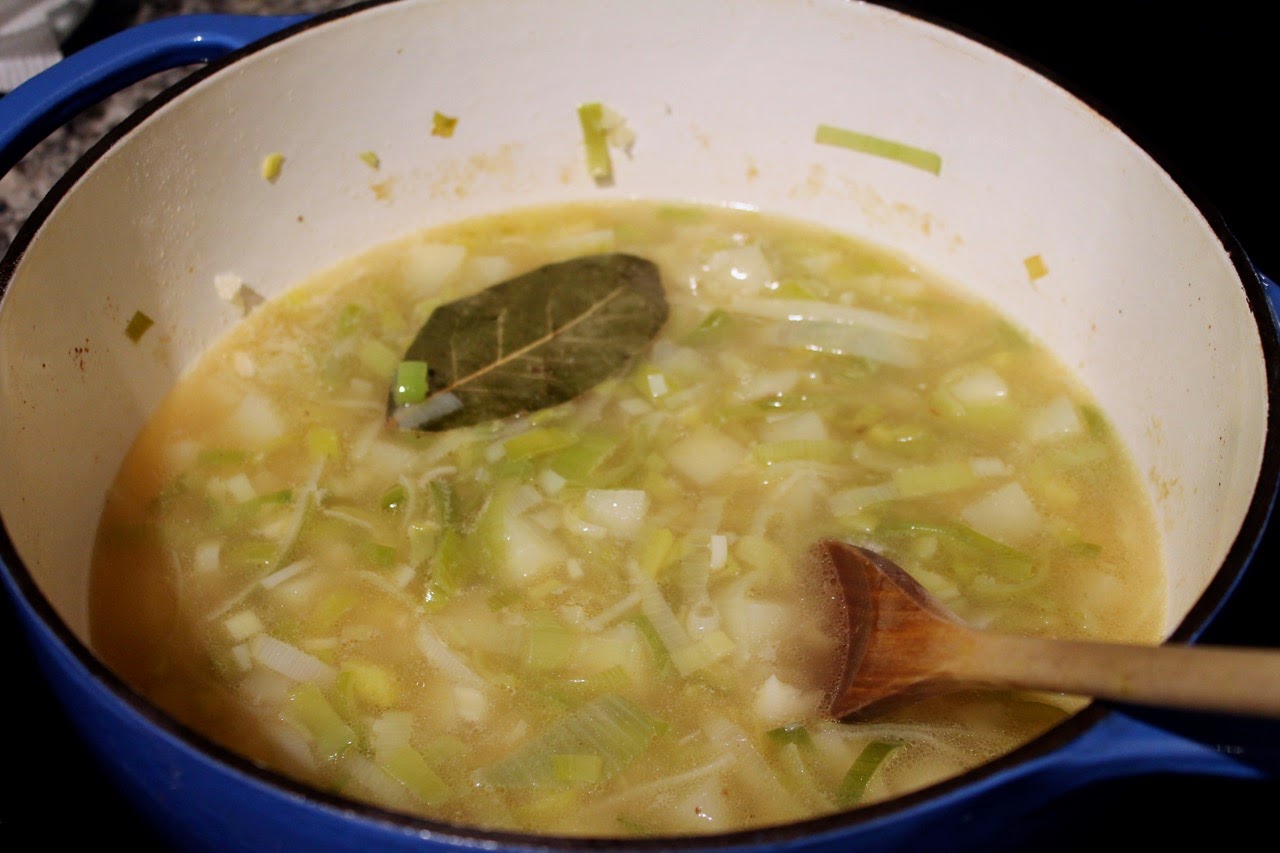 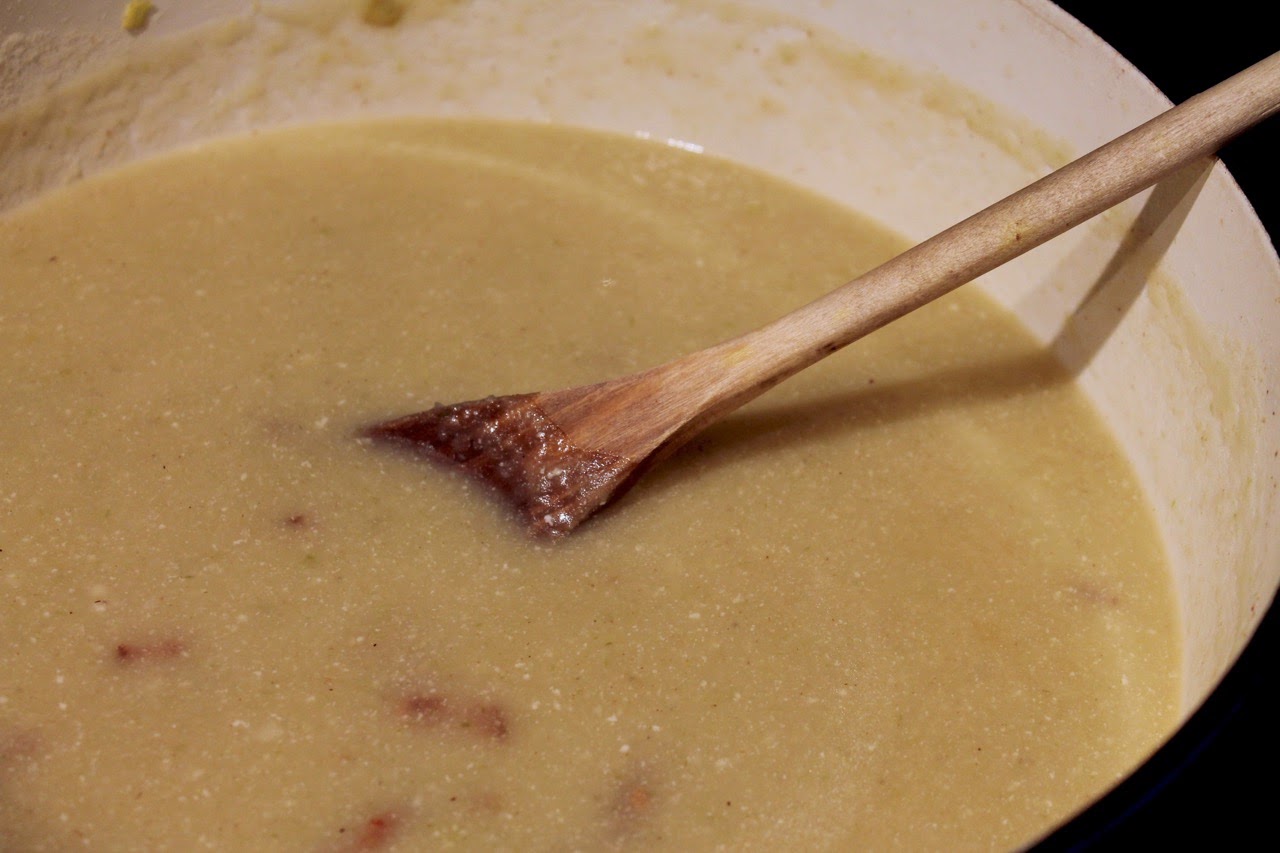 This soup was exactly what I was looking for. It was still clearly potato-leek soup but with a more complex flavor rounded out with smoke, tang and spice.

1. Cook the bacon in a Dutch oven over medium heat until brown and crisp. Remove with a slotted spoon and set aside on a plate lined with paper towels. Drain off excess bacon fat, leaving about 1 tbsp. in the pot.

2. Add butter to pot and, when melted, add the garlic and leeks. Cook over medium heat, stirring occasionally, until softened, about 8 minutes. Add the potato, chicken stock, water and bay leaf and season with salt and white pepper. Increase heat to high and bring to a boil. Reduce heat to medium-low and simmer until the potatoes are tender, about 10-12 minutes.

3. Remove the bay leaf. Using an immersion blender, puree the soup until smooth. Alternatively, transfer the soup in batches to a blender and puree until smooth. Stir in the cooked bacon, buttermilk, nutmeg and (if desired) the hot sauce. Serve in bowls topped with a generous sprinkle of fresh chives.
Posted by Cook In / Dine Out at 12:00 AM