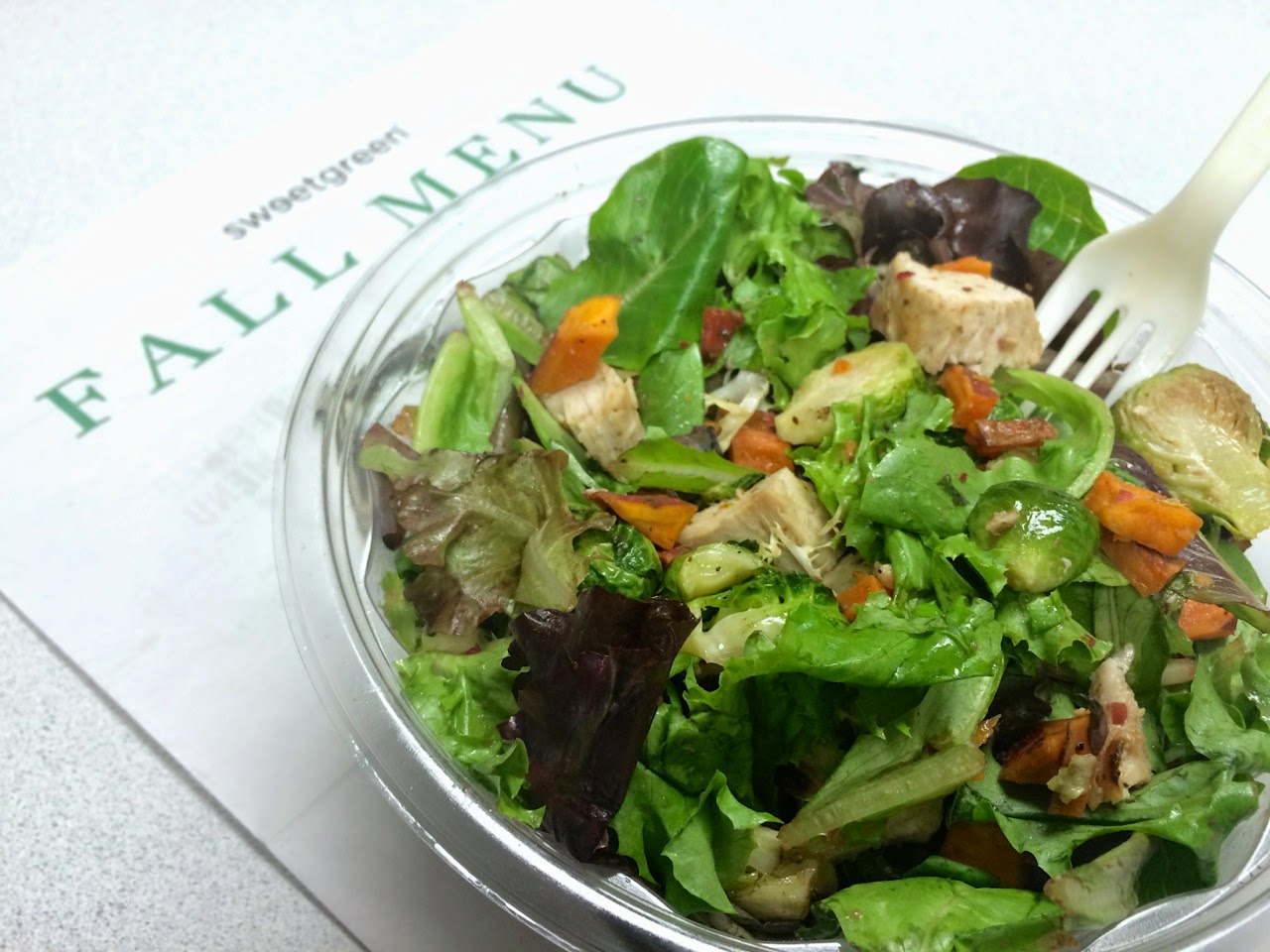 October 20, 2014 Update: Since the original post, I've tried the Hummus Tahina, which is a wonderful update of the Chic-P, and the Curry Cauliflower and Quinoa Bowl, which is a fantastic new seasonal grain bowl made with curry-roasted cauliflower. A squirt of sirarcha gives it a nice kick.

It may be a cliché, but as a D.C. professional, I'm pretty hooked on the fast-casual lunch. I'm lucky that there are quite a few of them near my office--including two Chipotlé locations. But the one that gets the most of my midweek business is Sweetgreen.

If you're not familiar, Sweetgreen was started in 2007 in Washington, D.C. by three Georgetown University students and has since expanded to 27 locations in D.C., Maryland, Virginia, Pennsylvania, New York and Massachusetts. If you visit other fast-casual restaurants, the concept is similar: lots of fresh ingredients, many organic and/or local, assembled any way you like. What sets Sweetgreen apart is that its food is not only delicious, it's also healthy. Plus, I find their friendly service to be a cut above what I get at most other similar restaurants.

Yesterday, Sweetgreen made a rather dramatic overhaul of its menu. Where previously they offered eight signature salads plus one rotating monthly seasonal salad, they revamped the menu to consist of six signature green salads, three signature grain salads and three seasonal salads that will rotate each season (with an extra rotation in the summer to take advantage of summer's ever-changing produce bounty).

I'm very excited about this change. Although I loved the monthly special concept, it could be a drag if the monthly salad wasn't something you liked. I wasn't partial to last month's crab salad, for example, so all September I didn't visit as much as I did during, say, last November, when the monthly salad featured agave-roasted turkey, sweet potatoes and cauliflower, which I couldn't get enough of.

Whether you're a regular like me curious whether your old favorites are still there or a newbie that hasn't experienced Sweetgreen yet, here's a rundown of what to expect next time you visit so you can plan ahead, complete with calorie counts, which are calculated based on a "light" amount of dressing (so obviously more calories if you go "medium" or "heavy").

There are three, and they all sound great. The Roasted Turkey and Fall Vegetable Salad (405 calories, pictured at top) is a fabulous flavor combination of  mesclun, roasted brussels sprouts, roasted sweet potatoes and cranberry vinaigrette. The sprouts could have used a little longer roast, but the potatoes were perfect. Since the menu was just updated yesterday, it's the only one I've tried so far, but I'm definitely looking forward to trying the other choices: Apples, Pears and Organic Cheddar Salad (425 cal.) with mesclun, kale, basil, candied pecans and balsamic vinaigrette, and Curry Cauliflower & Quinoa Bowl (560 cal.) with farro, arugula, cilantro, dried cranberries, roasted chicken, sriracha and cucumber tahini yogurt. I don't ever get the soup, but there are also two seasonal offerings: Organic Lentil Chickpea and Organic Butternut Squash Soup.

I know some people get really attached to these signature salads and always order the same one. Rest assured that three of the most popular--the Kale Caesar (430 cal.), Guacamole Greens (540 cal.) and Spicy Sabzi (430 cal.)--are still on the menu and haven't changed, although you may notice their calorie counts are slightly different. A Sweetgreen representative told me this is because they reformulated the dressings a bit to improve their taste and quality. Gone from the menu are the Misoba, Santorini, Chic-P and District Cobb, although fans of the Chic-P and District Cobb will see that two of the new salads are very similar:

Given that the menu salads have changed, the ingredient options have also changed to reflect all of the aforementioned salads' ingredients. The dressings lineup has also changed a bit:
I have no complaints about the new expanded menu and look forward to trying all the new offerings. And I suspect my old favorites, the Kale Caesar and Earth Bowl, will remain in the mix as well.