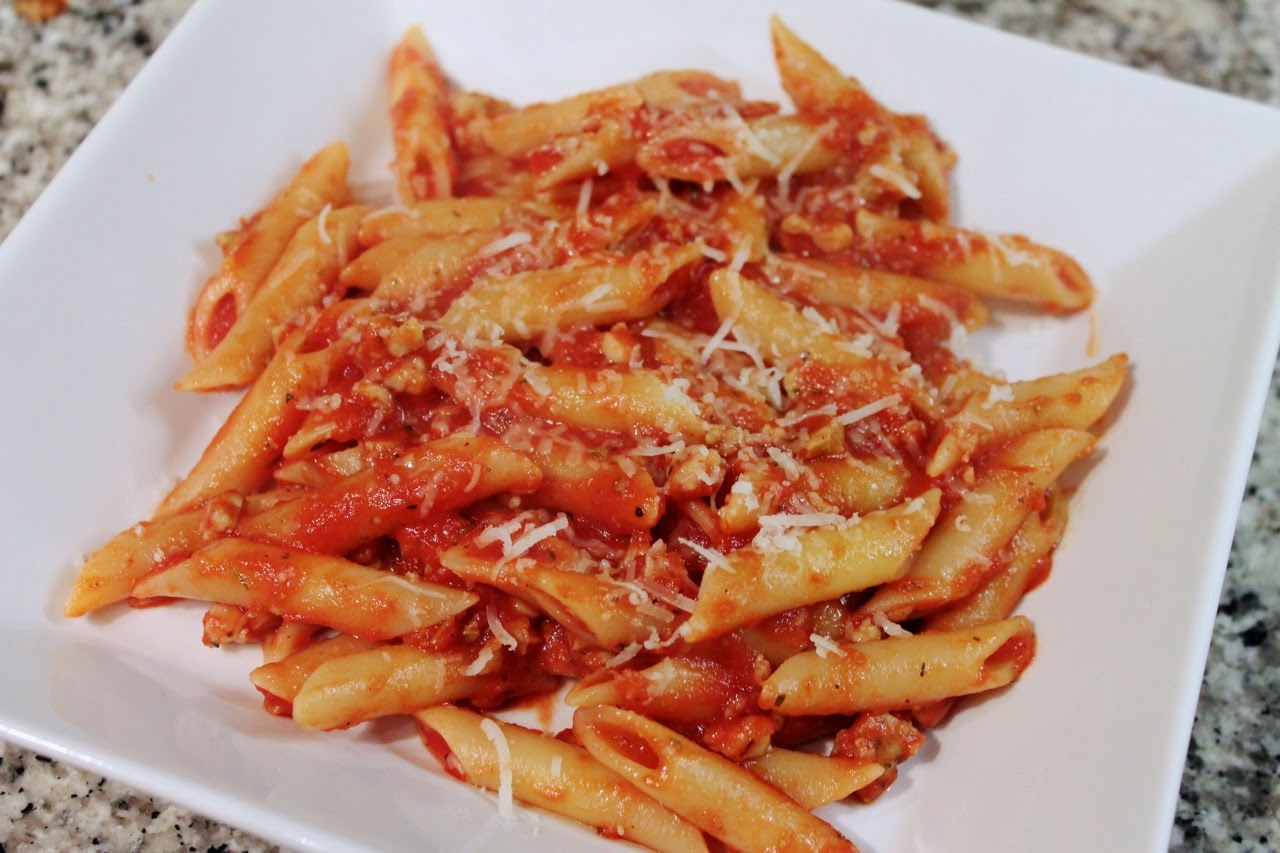 I make pasta a lot, and during any time except July-September, if it contains tomatoes they are canned.

The grocery store is acutely aware of the association between pasta and canned tomatoes. The dried pasta is located on the same aisle as the whole, diced, crushed, pureed and pasted (if that's a word) tomatoes. Your De Cicco and San Marzano and just a mere feet away, waiting for you to combine them into something wonderful. 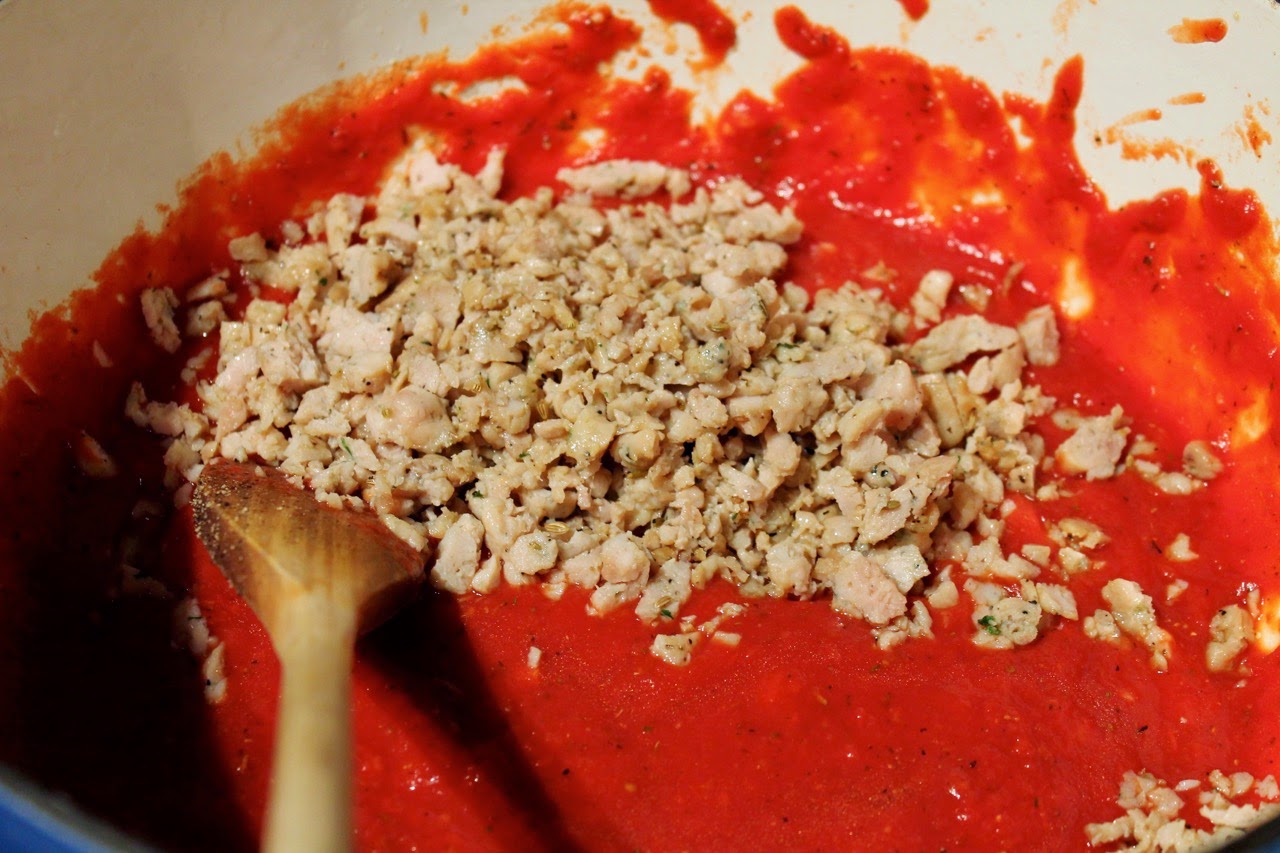 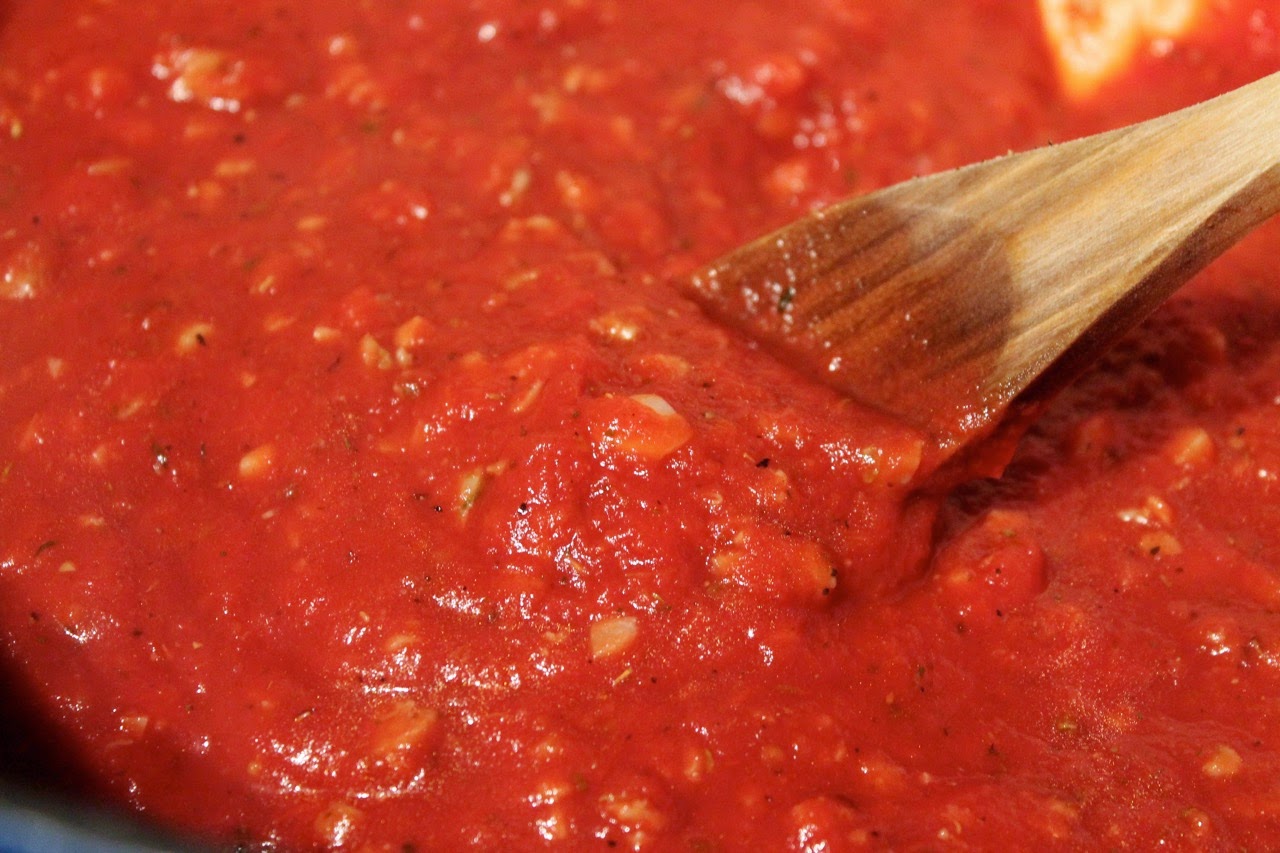 There's another specter on this aisle though: the jarred pasta sauce. And it's a demon. I haven't bought this stuff for years, but checked up on them recently. I see they now sell them with cheese already mixed in--can't imagine that does great things for the cheese. Several also bill themselves as being "with meat," but don't specify which meat. According to the ingredients, it's beef, which is only slightly more descriptive--I'm going to assume we're talking ground beef. One such sauce also contains soybean oil (more of it than beef) and "natural flavor" whatever that is (based on what I've read, it could be just about anything cooked up in a lab somewhere). And many of them have added sugar, which good tomatoes just don't need. 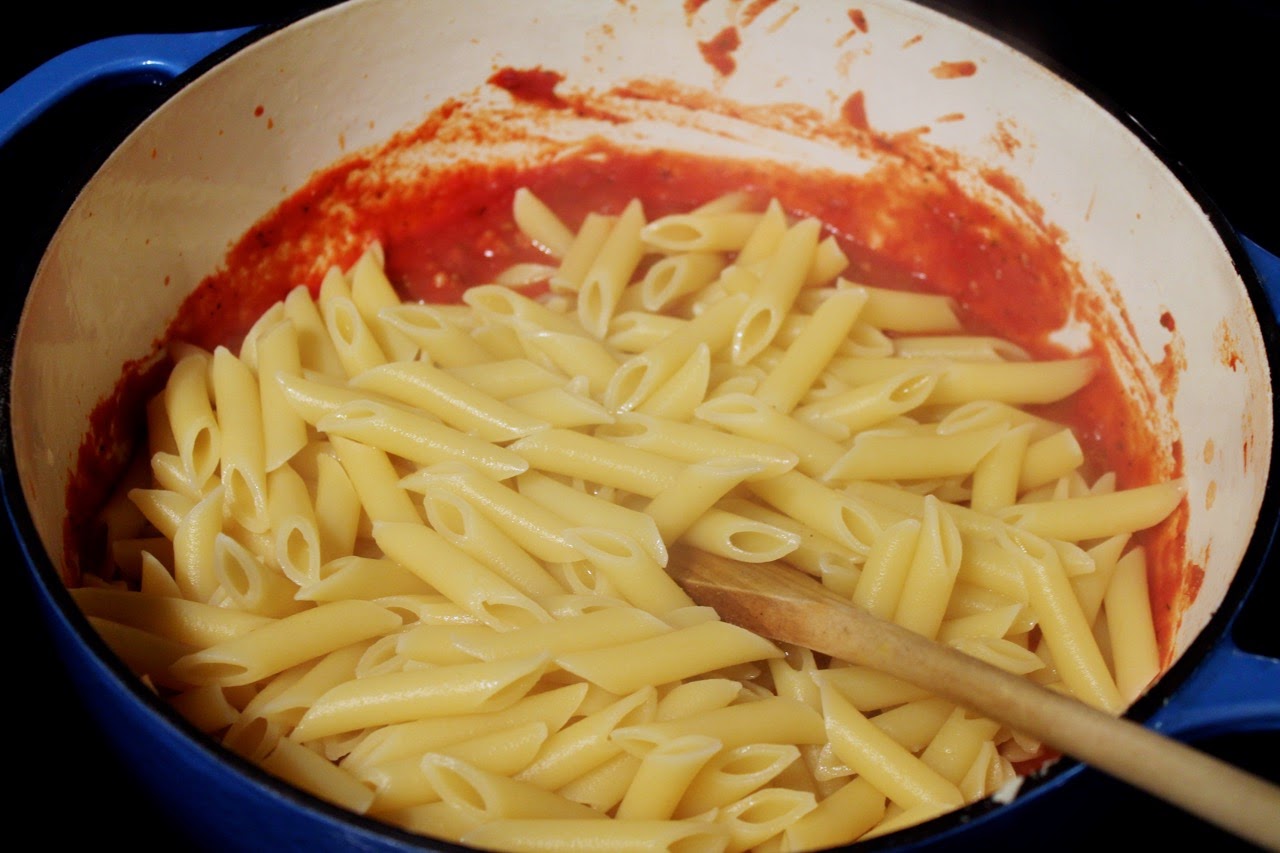 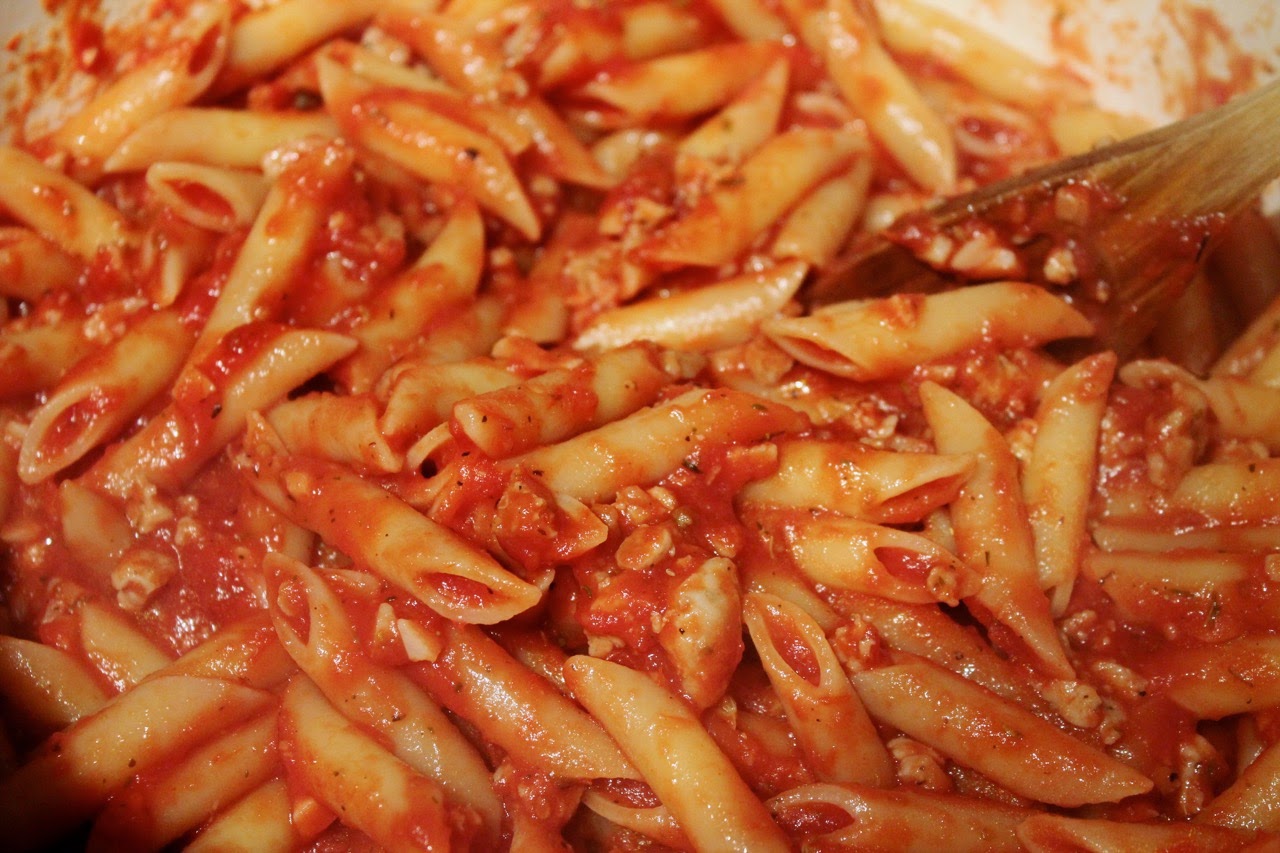 If I'm sounding rather snooty about jarred pasta sauce, I don't apologize for it, and here's why: you can make something far better yourself using canned tomatoes. It's not hard to whip up a simple sauce. And you can do it in the time it takes to boil the noodles. After putting a pot of water on the stove to boil at 6:45 (which takes about 15 minutes), this dish was ready at 7:10. And it was good, really good. So next time you're in the mood for simple pasta with tomato sauce, pick up a few extra ingredients and skip the jarred stuff. You'll be much happier. 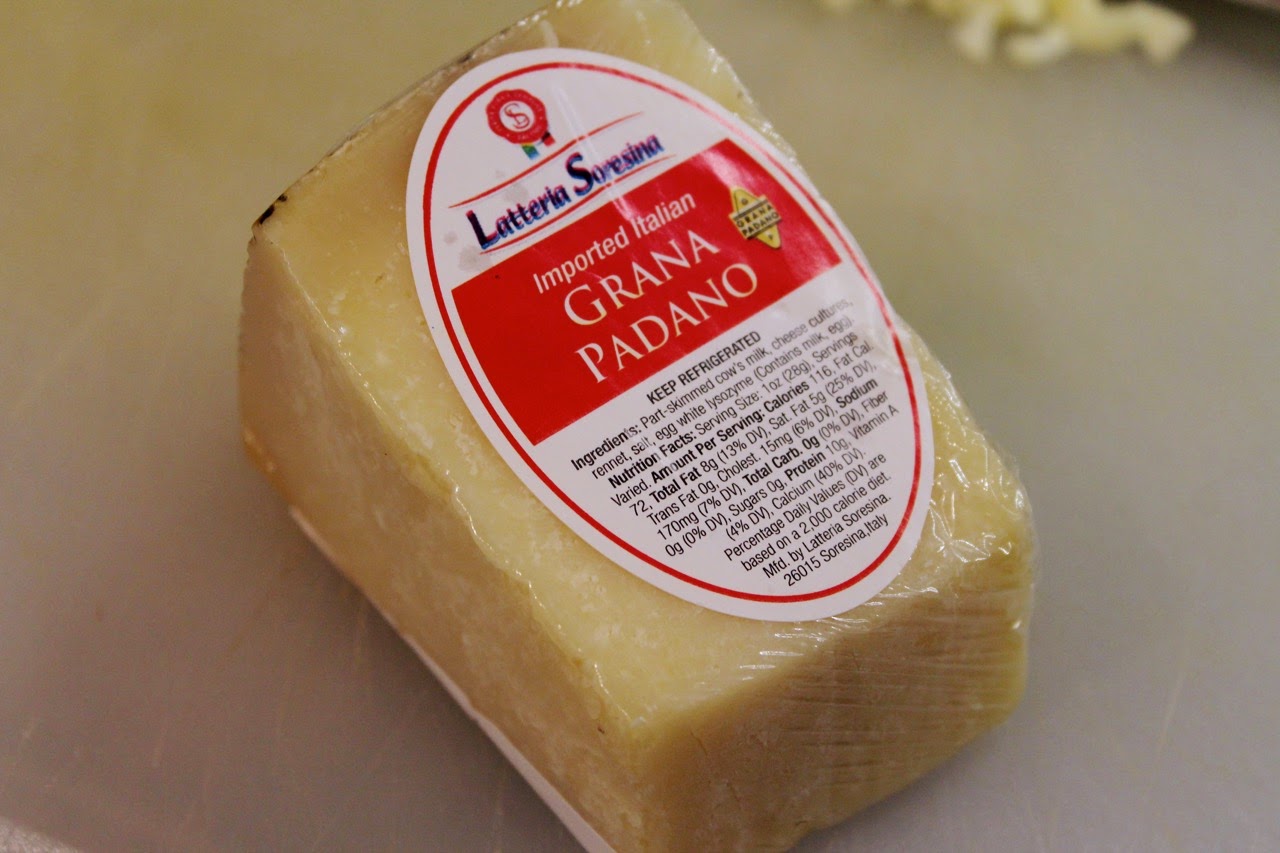 A word about grana padano, the cheese I used. I first learned about it last summer while reading Molly Wizenberg's memoir Delancey. It's one of the cheeses she said they use on their pizzas. I've been searching for it ever since. Although I've read that grana padano is more prevalent than parmigiano-reggiano, in my experience, it's harder to find in the United States. Our Whole Foods doesn't have it, and I once helped an employee of a specialty deli search through her cheese case looking for the grana padano they were supposed to have (we couldn't find it). Then one recent weekend at Giant, I came across a display of it at the end-cap of the specialty cheese case. Yes, sometimes the conventional grocery store does have things you can't find elsewhere. 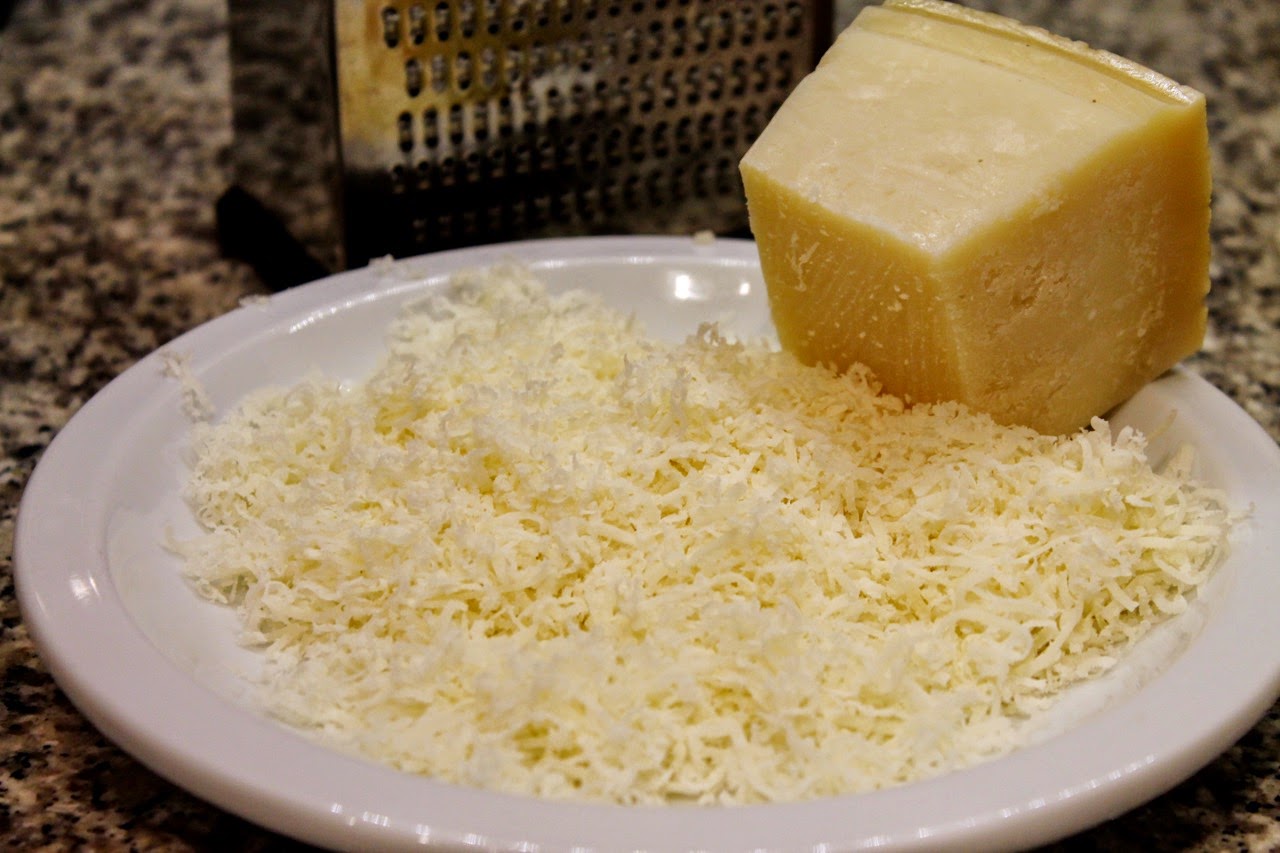 This is a hard Italian cheese similar to parmigiano-reggiano, both of which are types of "grana" cheese (there is a third primary type, grana trentino, that I've ye to try). I tried slices of both cheeses side-by-side. Their flavor is very similar. Unless you're a real cheese expert, if someone fed you a spoonful of grana padano, you would probably say it was parmesan. The grana padano is a slightly milder flavor--you don't get quite that nutty taste of parmigiano-reggiano, and the texture is also a bit softer--there isn't any of that slight crunch you get with parmigiano. If grana padano does become easier to find, I might buy it more often, especially if it is less expensive.

1. Bring a large pot of salted water to boil. Cook the pasta according to package directions for al dente. Drain and set aside.

2. In a large pot, such as a Dutch oven, heat 1 tbsp. olive oil over medium heat. Add the sausage and cook, breaking up with a spoon, until no longer pink and lightly browned in places. Remove from the pan, transfer to a cutting board and chop fine.

3. Add the other tbsp. olive oil to the pot. Add the garlic and red chili pepper flakes and cook until fragrant, about 1 minute. Add the crushed tomatoes and thin with about 1/2 cup of water. Season with oregano, thyme, nutmeg, salt and pepper. When the mixture begins to sputter, reduce the heat to medium-low and simmer a few minutes (if you're doing this while pasta is cooking, give it about 10 minutes). Turn off the heat and stir in the pasta to coat it with the sauce. Serve the pasta in shallow bowls with the grated cheese at the table.
Posted by Cook In / Dine Out at 12:00 AM