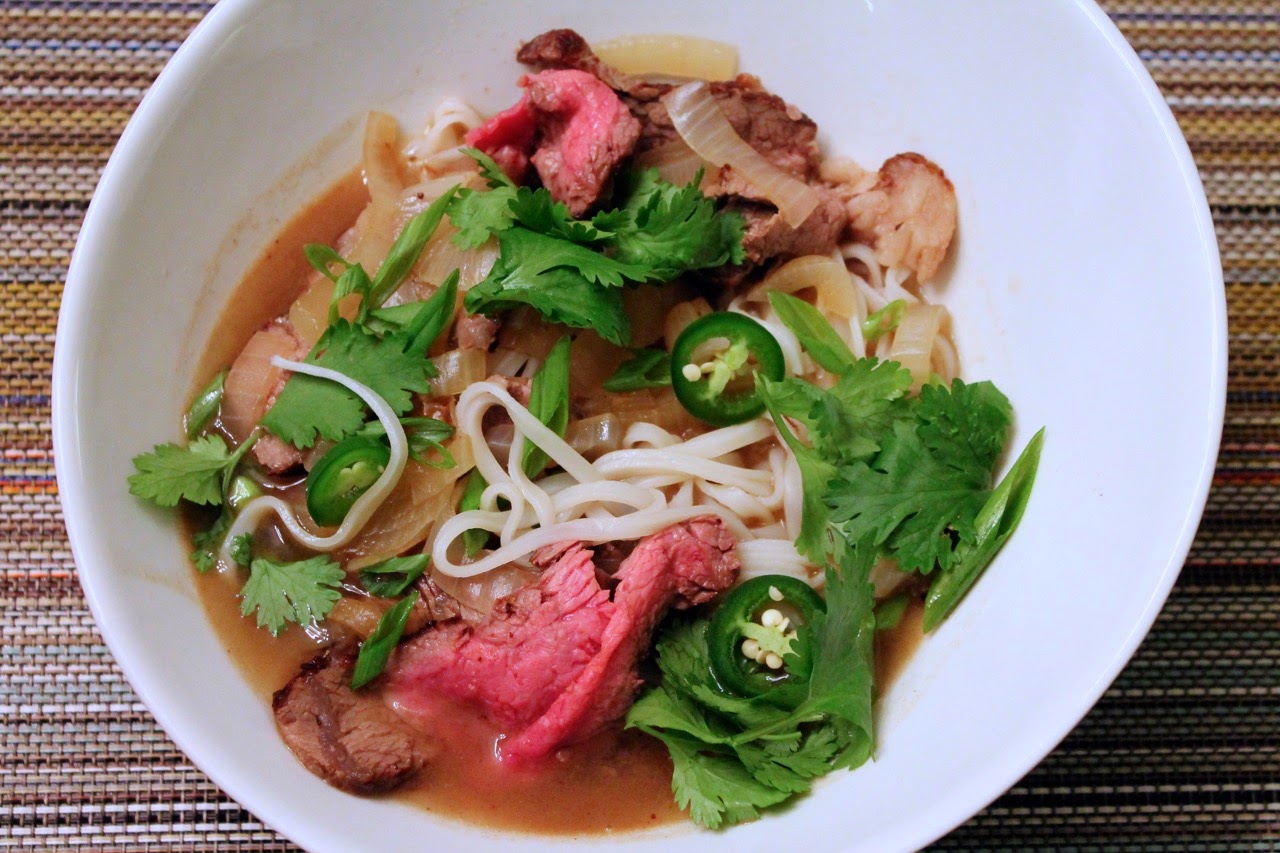 The first lesson about pho: it's pronounced "fuh," as in rhymes with "duh," which is what you can say once you've mastered that and other people still pronounce it like "foe" (or perhaps "faux").

Pho is one of the great Asian noodle soups. Its boom in the D.C. area preceded the recent ramen craze. I first tasted it in the early '2000s at Nam Viet Pho 79 in Cleveland Park and have enjoyed it more recently from Pho 14 in my neighborhood (ever wondered why pho restaurants are numbered? Northern Virginia Magazine did a story on this). I love the interplay between the warm broth, the onions, the beef and the fresh garnishes. 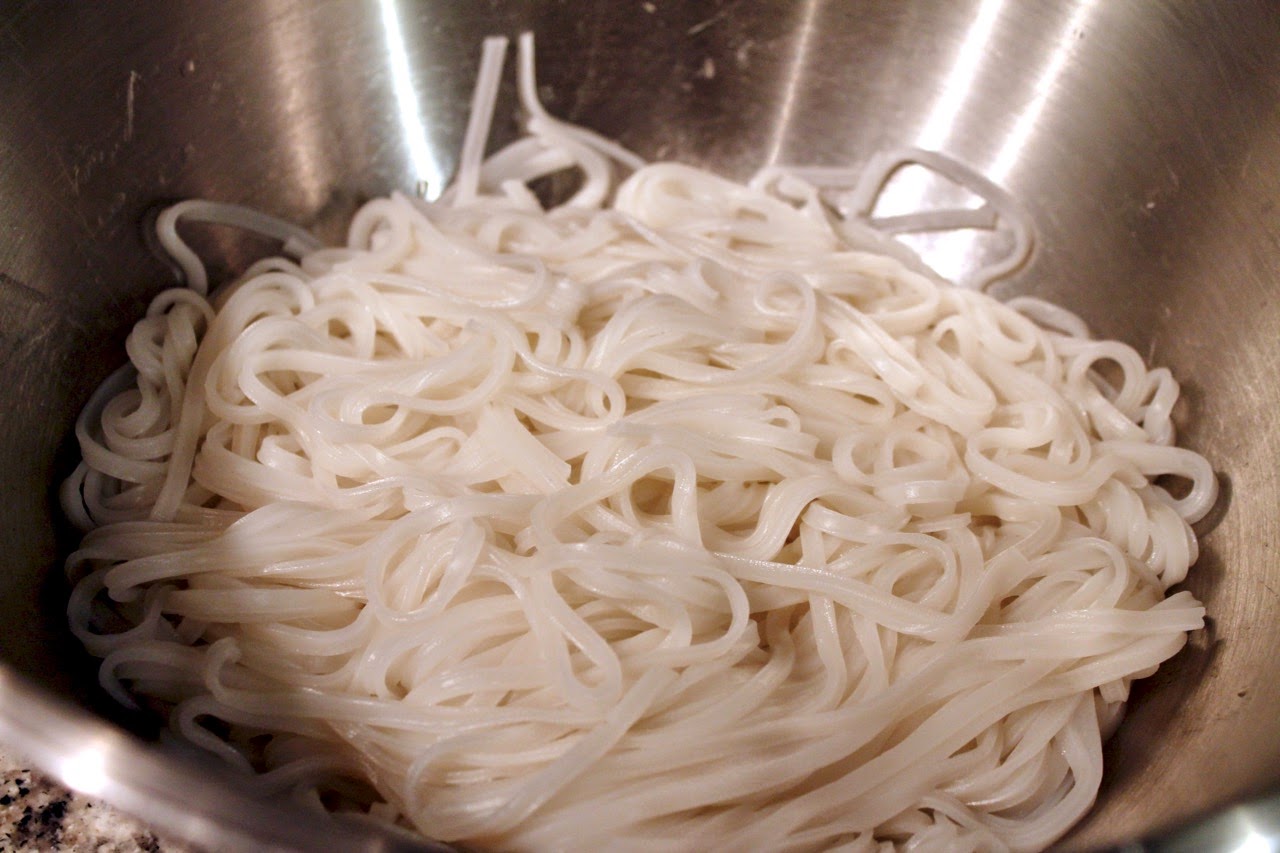 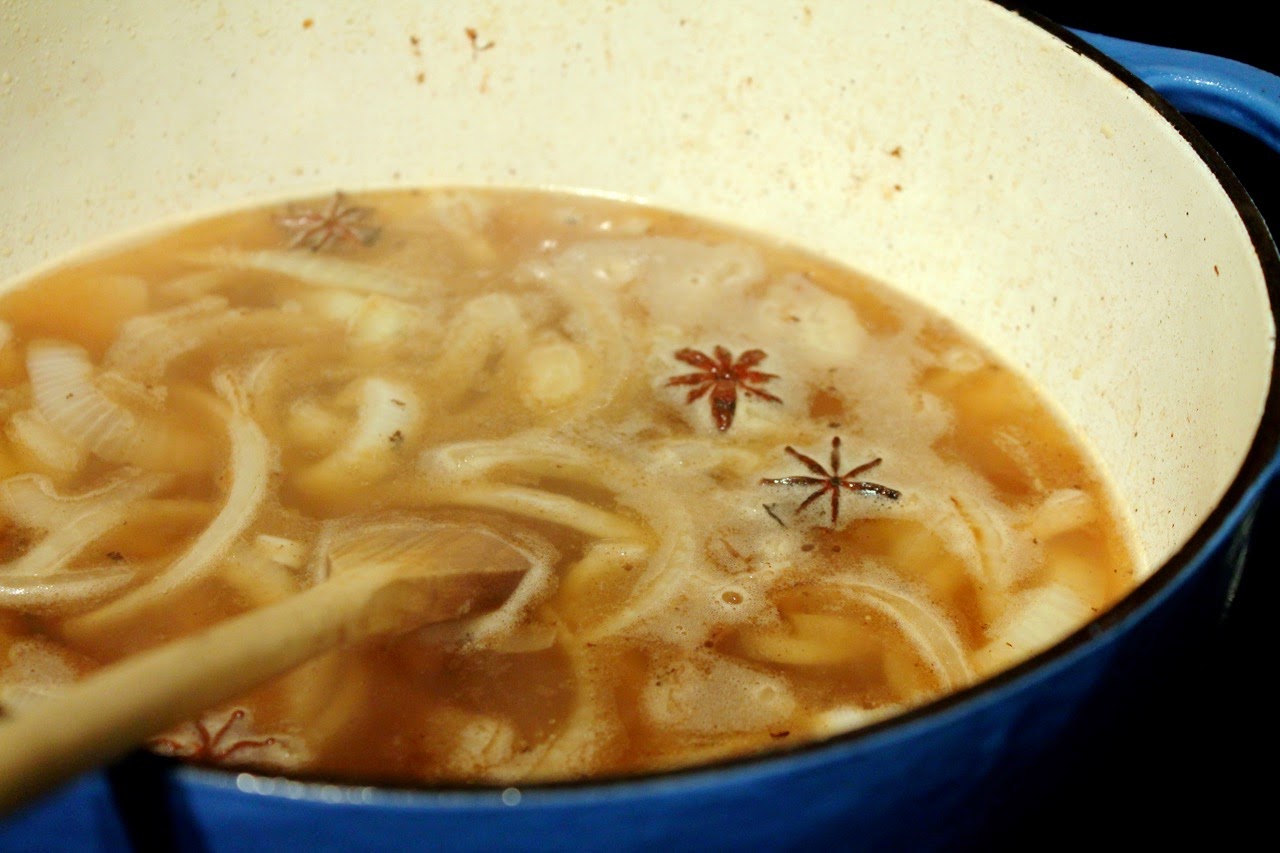 A typical bowl of pho is made with a spicy broth, flat rice noodles (I like something that isn't too wide, resembling linguini), meat (beef or chicken often) and fresh garnishes (cilantro, scallions, bean sprouts, a lime wedge). That last part is what distinguishes it from ramen, which generally has all or almost all cooked ingredients.

I actually forgot about my bean sprouts and the soup was tasty without them. I think the vegetable garnishes should really be considered interchangeable, even the cilantro, if you're one of those people with a genetic aversion to it (yes, that some people think cilantro tastes "soapy" is a genetic thing). 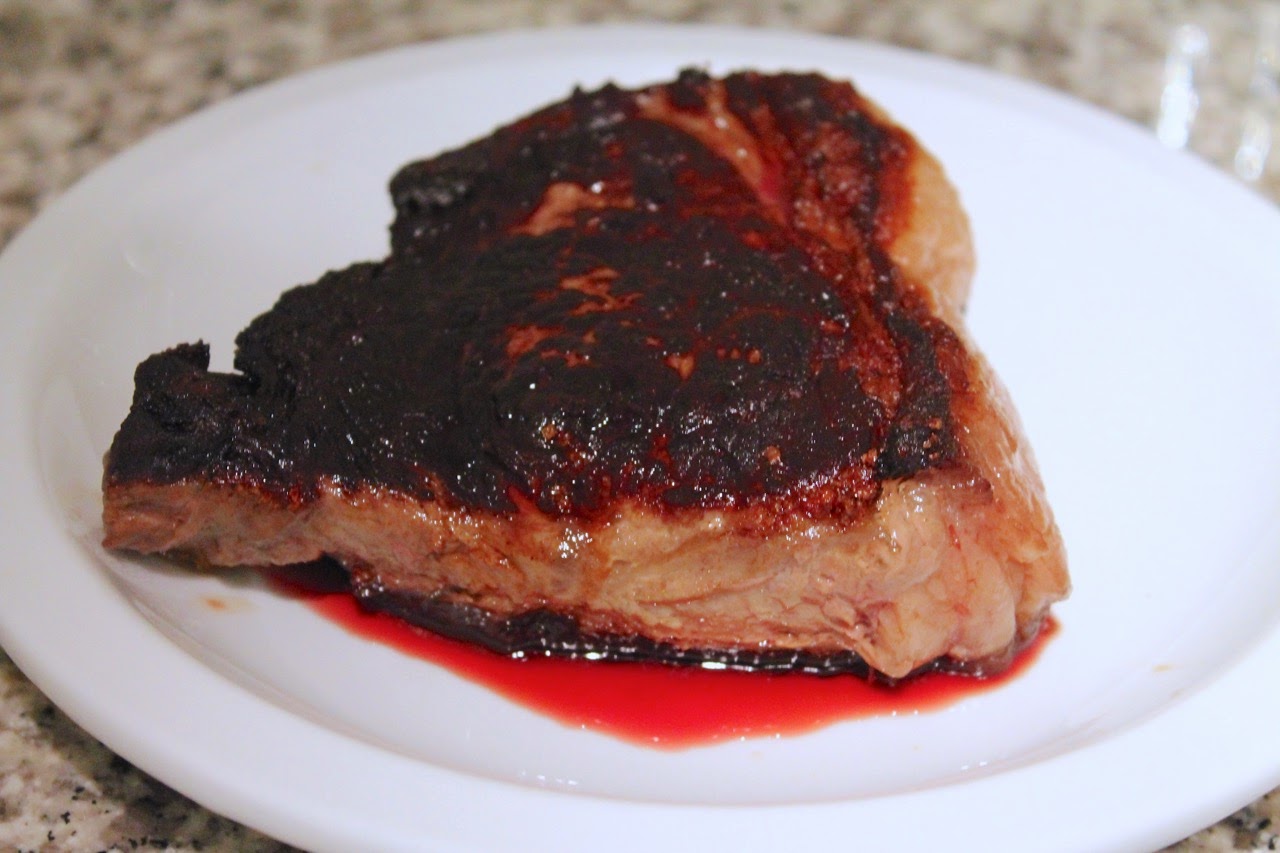 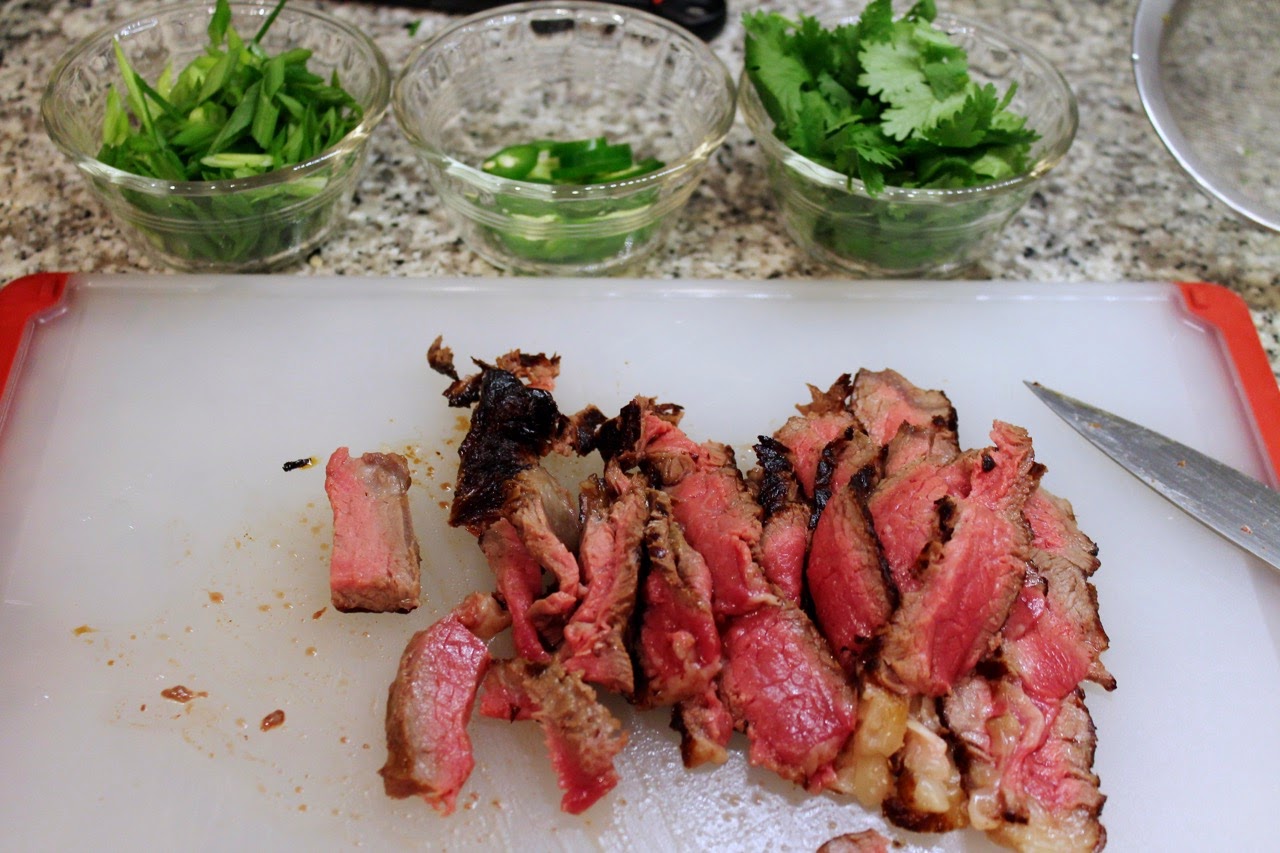 Although you can make it with chicken, I prefer beef in pho. I used sirloin, since that's what this Food Network Kitchen recipe called for, but you may use other cuts. I've seen it with flank steak, brisket and eye of round roast. The beef should not be overcooked. I suggest aiming for medium rare.

Be sure to use the right spices for this. Star anise and cinnamon are essential for flavoring the broth. I've seen clove, coriander and fennel seed use in other recipes too. And please don't skip the fish sauce. Sure, it smells funny, but mixed in with the other ingredients it does its job to add just enough pungency to elevate the the broth without making it fishy. A warm bowl of soup like this is perfect for these nasty cold winter nights. 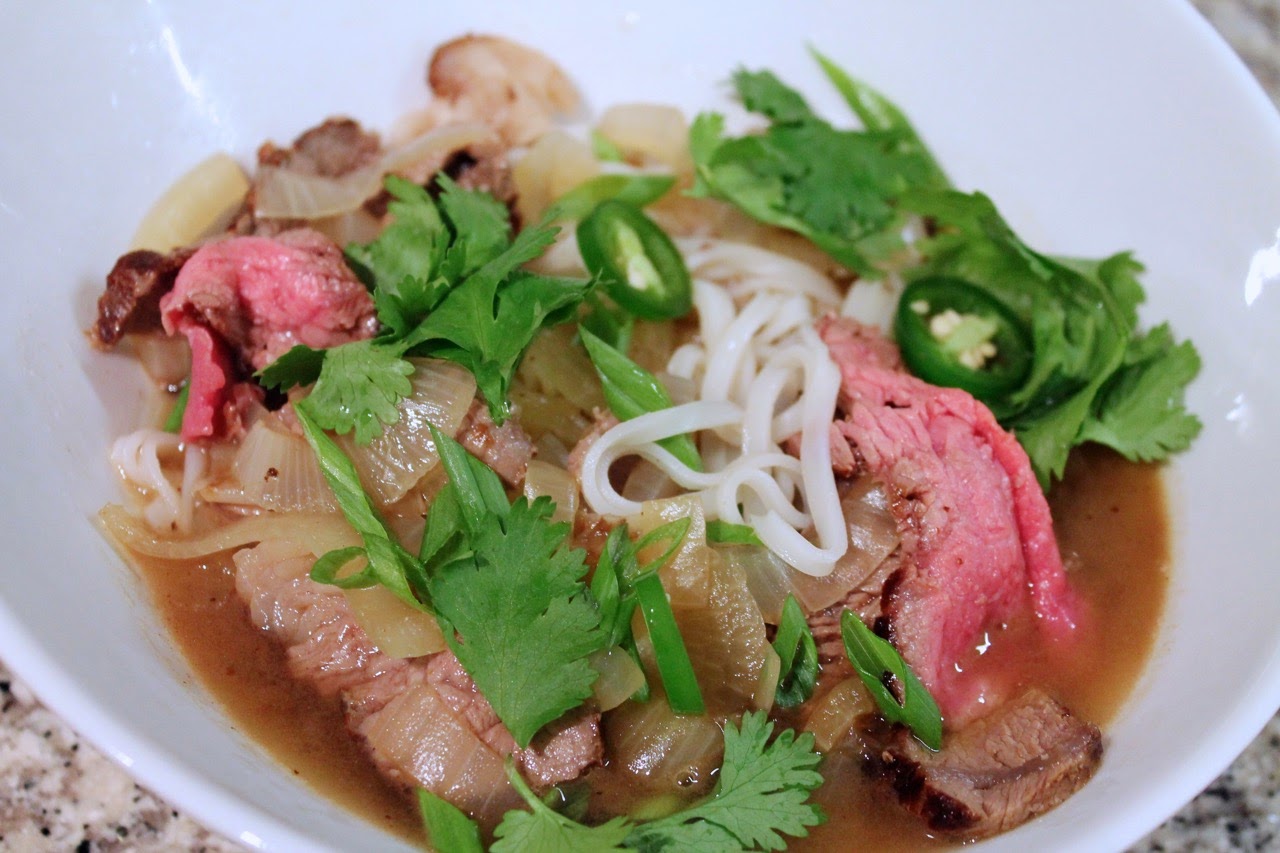 1. Cook rice noodles according to package directions (do not overcook). Drain and set aside.

2. Heat vegetable oil in a Dutch oven over medium-high heat. Pierce sirloin all over with a fork to tenderize, then sear in the Dutch oven on both sides, cooking about 3-5 minutes per side. Set aside on a plate. Add the onion and ginger and sauté about 4 minutes. Then add the broth, water, star anise and cinnamon. Bring to a boil, then reduce heat and simmer for 20 minutes. Add the fish sauce and bring to a boil for 5 minutes. Discard the ginger, star anise and cinnamon stick. Thinly slice the meat and add to the soup.

3. Divide the noodles among 3 or 4 large bowls. Ladle a generous portion of broth with meat and onions into each bowl, then top with scallions and cilantro (and, if desired, jalapeño pepper slices, lime wedges and bean sprouts).
Posted by Cook In / Dine Out at 12:00 AM