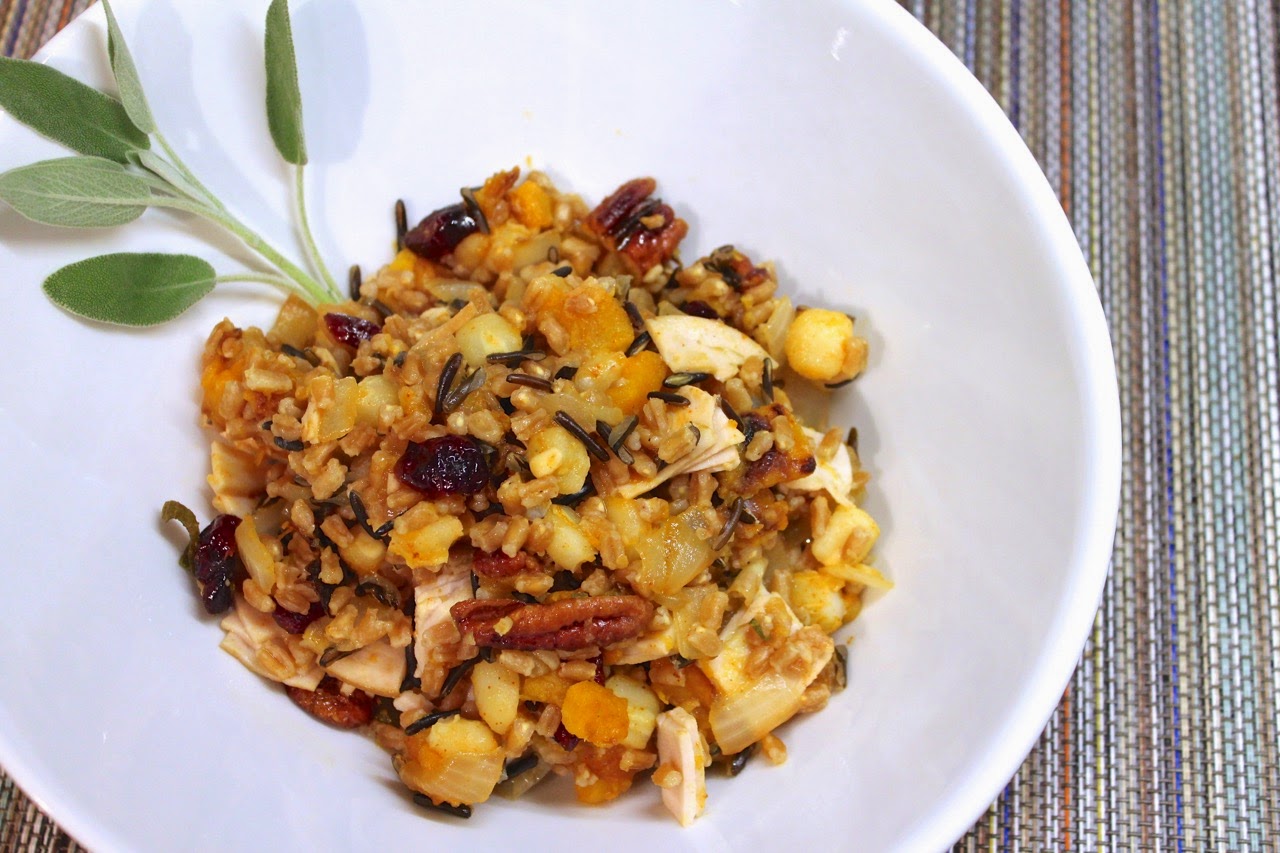 Last week, while my blog was "dark," Chris and I were on vacation traveling around national parks in the Southwest. Next week, I'll be sharing with you what we ate, a wonderful (well, mostly) mix of Southwestern delights like Mexican and barbecue, and a pretty amazing sage margarita in what might be my new favorite cocktail bar in Santa Fe.

When you have a great time on a vacation, it can be hard to let go. So consider this Southwestern-themed fall grain bowl my attempt to hold on to some of those very tasty memories.

Hominy is a new ingredient for me. I had it several times earlier this year at the Mitsitam Cafe at the Smithsonian National Museum of the American Indian and a couple of times during our recent trip as the key ingredient in posole, a spicy pork and hominy stew. Hominy is corn soaked in an alkali solution that loosens the hull and causes the remaining kernel to swell. Dried hominy is used to make grits and corn tortillas. You can buy and cook dried hominy, which some say has better flavor and texture, but I used Goya canned hominy here, which worked fine. Giving it a few minutes in the pan with the onions helped it dry out a bit, and its texture, while probably softer than if I'd started with dry kernels, still had a nice chew.

All over the Southwest, especially in Santa Fe, we saw large arrangements of dried hanging chili peppers, known as ristras, and a lot of our food was pretty spicy, so I gave this a generous dose of New Mexico chili powder, which is actually pretty mild as chili powders go, so don't use it too sparingly. I knew I had to have some sage in this dish, since it was a key component in the aforementioned margarita and also just a great herb in fall dishes. And pecans are a natural for Southwestern foods too, as they are native to Mexico and are grown in several Southwestern states.

The resulting dish has a nice mix of sweet and spicy with a little bit of smoky too. It would make a great Thanksgiving stuffing actually. Vegetarians and vegans could easily omit the turkey and still have a wonderful dish. 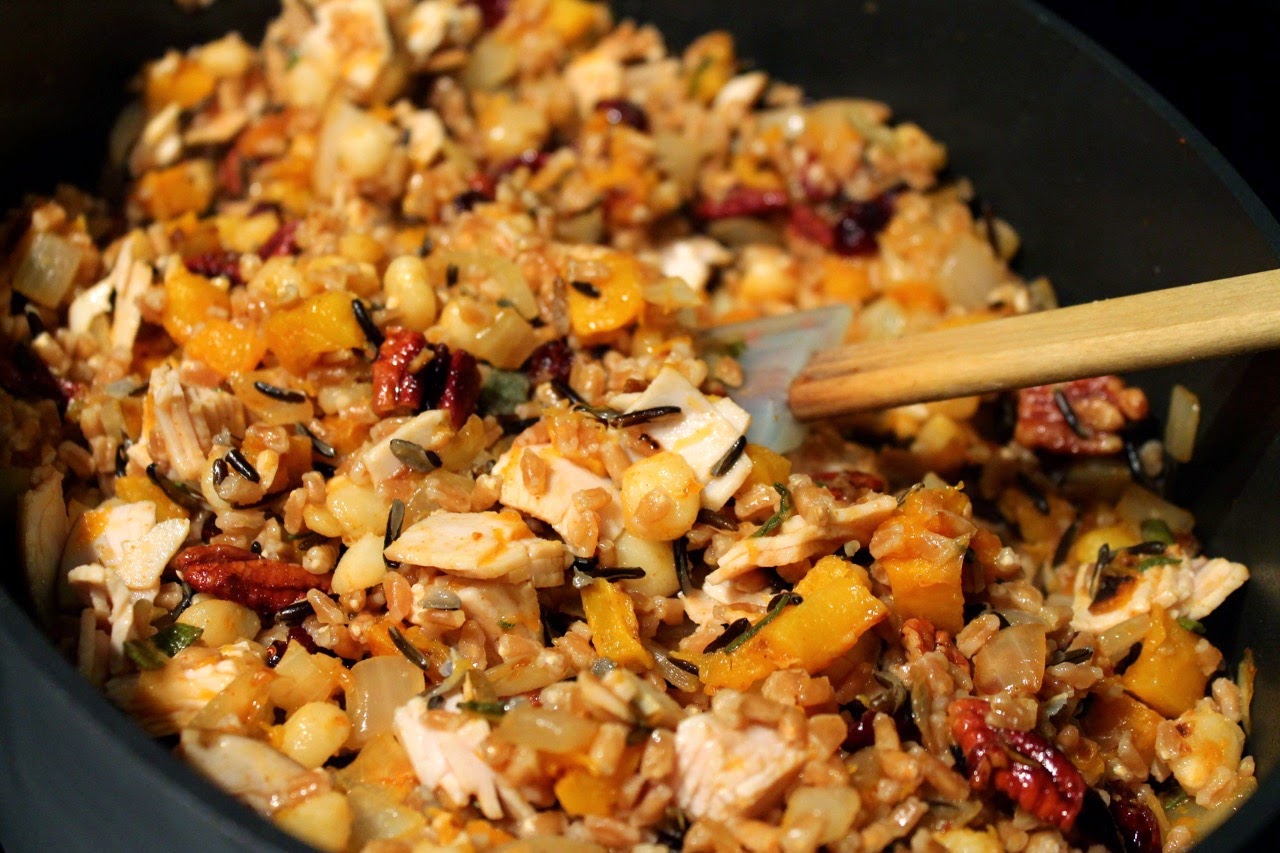 
1. Preheat oven to 475 F. Combine squash, 2 tbsp. olive oil and salt in a large bowl and stir to combine. Spread squash on a baking sheet in a single layer and roast for 15 minutes. Stir and roast another 15-20 minutes until the squash is softened and lightly browned. Set aside (refrigerate if not using immediately).

2. Bring 2 1/2 cups of water to a boil in a large (4 qt.) saucepan. Add the wild rice and boil for about 4 minutes, then add the farro (cooking the wild rice by itself first adjusts for its slightly longer cooking time), cover the pot, reduce heat to low and simmer for about 15 to 18 minutes until the grains are cooked through but still a bit chewy. Drain of any remaining liquid and set aside.

3. Heat pecans in a small (8-inch) frying pan over medium-low heat. Once the nuts are fragrant, after about 5-6 minutes, sprinkle with chili powder and salt, then drizzle with the agave nectar. Stir to coat the nuts evenly and continue cooking until the agave has evaporated into a thick coating. Remove from heat.

4. Heat 2 tbsp. olive oil in a large sauté pan over medium heat. Add the onion and sauté until lightly browned, about 10 minutes. Add the hominy, then season with salt, chili powder and cumin, stirring to combine. Cook a couple minutes until the hominy has dried out a bit, then add the sage, dried cranberries and turkey. Add the roasted squash, cooked grains and glazed nuts, stirring until evening combined and heated through. Serve mixture in shallow bowls.
Posted by Cook In / Dine Out at 12:00 AM